China’s Tianwen-1 mission has successfully entered orbit around Mars, the second craft to do so in as many days and the country’s first such interplanetary mission to reach the Red Planet.

Like the UAE’s Hope Probe Mars Orbital Insertion (MOI) yesterday, China’s five-tonne spacecraft also preformed a burn of its engines to slow the vehicle down enough to be captured by Mars' gravitational pull.

The crucial "braking" operation was activated at 7:52 pm local time and fired for about 15 minutes.

The burn was then followed by an 11 minute silence as the craft flew behind Mars and out of radio contact.

Tianwen-1, which loosely translates as “questions to heaven” consists of a Mars orbiter, and a lander and rover that are expected to touch down on the martian surface sometime in May.

Weighing about 240 kilograms, the rover has six wheels and four solar panels and is able to move 200 metres per hour on Mars.

It has scheduled to land in the southern part of Mars' Utopia Planitia, a large plain within Utopia to search for evidence of current and past life.

The lander carries six scientific instruments including a ground-penetrating radar, a multispectral camera, and a meteorological measurer which will be used to produce surface maps, and to characterise soil composition and water ice distribution, during a mission expected to last about three months.

Meanwhile, high up in the martian skies, the Orbiter will collect data on the electromagnetic and gravitational fields around the planet and will serve as a communication relay for the rover to send and receive information from Earth. It will also examine Mars’ atmosphere, focusing in particular on the ionosphere.

Even before reaching Mars, Tianwen-1 has been busy testing equipment ready to start on its mission objectives.

In September 2020 Tianwen-1 deployed the TW-1 Deployable Camera (TDC), a small satellite with two cameras that took photos of the spacecraft. The images were then transmitted back to Earth via a wireless radio link to test Wi-Fi connection.

The probe then used its cameras to send back its first captured image of Mars from a distance of 2.2 million kilometres.

The black-and-white photo released on 5 February by the China National Space Administration showed geological features including the Schiaparelli crater and the Valles Marineris, one of the largest canyons of the Solar System, stretching a vast 4000 kilometres (2500 miles) long.

And, according to China Daily, last week the probe’s Mars Energetic Particle Analyser, mounted on the spacecraft's orbiter, was activated and has already begun to conduct scientific operations.

With the safe arrival of Tianwen-1 at Mars, China is now the sixth country to put a spacecraft into orbit around our nearest planetary neighbour – it missed out on fifth place by just one day to the UAE’s Hope Probe.

The duo will soon be joined by NASA’s Mars 2020 Perseverance rover mission, that will make its arrival in just over a week. 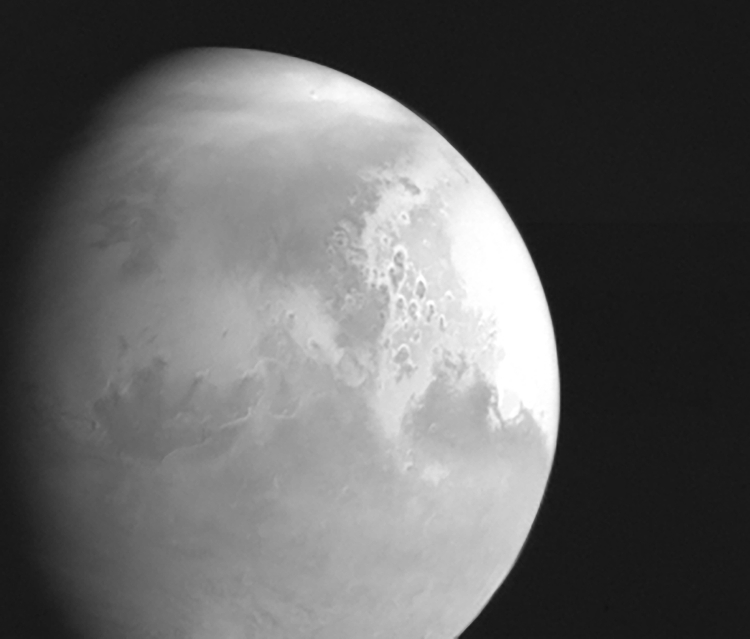