Success for InSight as it performs a flawless landing on Mars

“I made it!” NASA’s InSight spacecraft lets an ecstatic mission crew on Earth know that its journey to the Red Planet was a success!

Now firmly planted at Elysium Planitia on Mars for at least one martian year (about 23 Earth months), NASA’s InSight spacecraft beat the odds to successfully land on the Red Planet after a flawless descent and text-book landing.

It was not just down to a stroke of luck on the spacecraft’s part however as InSight’s entry, descent and landing (EDL) team worked for months beforehand to pre-program every stage of InSight's landing, making adjustments based on weather reports from NASA's Mars Reconnaissance Orbiter flying overhead.

InSight’s EDL phase was watched by a whole host of eyes and ears around the globe, including ESA’s deep-space ground tracking stations and its ExoMars Trace Gas Orbiter (TGO). However a few others had prime viewing positions in which to watch and monitor the events as they unfolded.

Closer to the action than most was two briefcase-sized spacecraft whose main purpose was to relay InSight’s progress as it descended to the martian surface; MarCO-A and B, or MarCO for short.

The experimental CubeSats, which were built by early career scientists from off-the-shelf parts, locked signals on to the spacecraft in the run up to the final minutes of decent and relayed EDL information as expected. As MarCO is equipped with both UHF (receive only) and X-band (receive and transmit) functions in its tennis ball-size radio, the duo were able to inform mission control in real time what was happening with the lander.

The lander successfully navigated the ‘seven minutes of terror’ in which it deployed its parachute, and, amidst whoops of happiness from the crew, the lander’s radar continued to count down the fast approaching surface. At one point, the lander reached a velocity of 2000 metres per second as it plummeted towards the surface, causing the heat shield to experience temperatures of over 1650 degrees celsius (3000 degrees fahrenheit).

After a tense minute or two, MarCO continued to exceed all expectations by informing the crew that not only had the spacecraft performed an impeccable landing, but that it was alive and well on the surface.

"Landing on Mars is difficult and takes a lot of personal sacrifices, such as missing the traditional Thanksgiving, but making InSight successful is well worth the extraordinary effort,” said Tom Hoffman of JPL, InSight's project manager. With two out of three missions to the red planet ending in failure, the chances of InSight ending up as yet another defunct relic for future martian tourists to look out for was high.

With news sinking in that InSight is safely ensconced on the surface, mission control are breathing a huge sigh of relief, however time waits for no robot and InSight will soon start to get on with the task ahead. Over the next two to three months, the lander will start to deploy its instruments in preparation for surface operations and once the final position of each instrument is decided, it will take several weeks to carefully lift each one and calibrate their measurements.

Then InSight will start doing what it was sent 484,773,006 kilometres (301,223,981 miles) to do; to take the “vital signs” of Mars and become the first mission to directly study the deep interior of a planet other than Earth.

Mars’ surface has historically been the focus of missions to the Red Planet since the first successful flyby of the planet in 1964 by Mariner 4. “Now we finally will explore inside Mars and deepen our understanding of our terrestrial neighbor as NASA prepares to send human explorers deeper into the solar system,” said Lori Glaze, acting director of the Planetary Science Division in NASA's Science Mission Directorate.

"It's taken more than a decade to bring InSight from a concept to a spacecraft approaching Mars - and even longer since I was first inspired to try to undertake this kind of mission," said Bruce Banerdt of JPL, InSight's principal investigator. "But even after landing, we'll need to be patient for the science to begin." 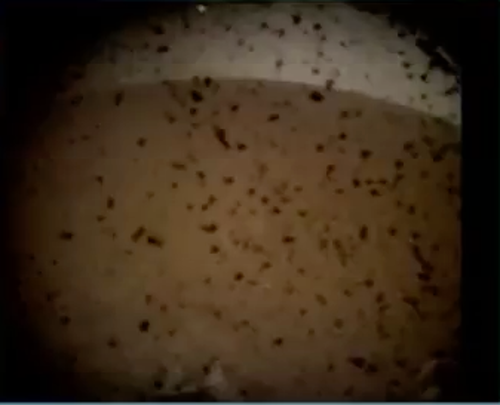 InSight's first picture of the surface of Mars sent back to Earth via the MarCO CubeSats. Image: NASA