One of the resounding successes of NASA’s recent InSight mission was the two shoe-boxed sized craft called MarCO that accompanied the probe on its journey to Mars. ESA will also soon be following in these footsteps as the agency plans to deploy Europe’s first deep-space CubeSats as part of its Hera mission. But just as you thought space exploration vehicles couldn’t get any smaller, scientists are now perfecting the ‘wafercraft’ - a spacecraft small enough to fit in the palm of a hand.

Measuring just 90mm in diameter, a prototype of the flat pancake-like craft, more formally known as a Wafer Scale Spacecraft (WSS), was recently launched into the skies above Pennsylvania via balloon, to an altitude of 32 kilometres (105,000 feet), by students at UC Santa Barbara under the guidance of physics professor and experimental cosmologist Philip Lubin.

The test, which was to evaluate the wafercrafts functionality and performance, performed ‘an excellent first flight’ according to Nic Rupert, a development engineer in Lubin’s lab and in its brief venture the wafer collected more than 4000 images of the Earth which it stored in its onboard flash memory. This encouraging initial performance of the programme, funded by NASA NIAC grants, along with generous donations from private backers, paves the way forward for the wafer to “evolve dramatically from here,” added Rupert.

This slim, round disk, no bigger than a flattened muffin case, is being developed to use photonic technologies, I.e lasers, to propel it through space at relativistic speeds – a similar concept that has been proposed for the light sail technology being researched by Breakthrough Initiatives for its Starshot mission. Unlike the light sail however, the wafercraft will be powered by a laser array on Earth in a process known as Directed Energy Propulsion.

Put basically this type of propulsion uses energy beamed to the spacecraft from a remote power plant to provide energy; it can be in the form of microwaves, but in this instance the wafercraft will use higher energy beams of laser light.

“Ordinary chemical propulsion, such as that which took us to the moon nearly 50 years ago to the day, would take nearly one hundred thousand years to get to the nearest star system, Alpha Centauri,” Lubin said. “And even advanced propulsion such as ion engines would take many thousands of years. There is only one known technology that is able to reach the nearby stars within a human lifetime and that is using light itself as the propulsion system.”

The wafercraft includes integrated optical communications, optical systems, sensors and a camera and when combined with directed energy propulsion, it would be capable of speeds around 20 percent of the speed of light, if not more. With a large enough laser array, you’d be at Alpha Centauri in something like 20 years, says Rupert - this is a fraction of the time that current rocket systems would take to reach our nearest star system.

The initial design of the wafercraft started off with commercially available components and conventional printed circuit board (PCB) construction techniques. The next iteration is to improve upon the scale by shrinking them to around 35mm x 35mm x 6.1mm and weighing just a paltry 10.25 grams.

But the miniaturisation does not stop there. Eventually these small, circular, silicon crafts could weigh as much as a thumbtack and incorporate various nanotechnologies used to build individual elements of the system. “It’s not that unrealistic to think that we can make one-gram pieces of silicon that are going to have everything we want on them,” said David Mc Carthy, a graduate student in the Department of Electrical and Computer Engineering.

Although these diminutive devices would appear to quash the need for CubeSats, this is not the end for this blossoming box technology that is just beginning to see its debut in deep space missions. Once perfected, these wafercrafts could then be mass manufactured at an incredibly low cost and packed into CubeSats and launched in “swarms” to collect vast amounts of data on whatever object is being targeted.

And their uses are potentially endless; mitigating space debris, boosting Earth-orbiting satellites, planetary defence against wayward asteroids and comets or even remotely powering distant solar system outposts noted Lubin. “Some of the more interesting, short-term ones would involve interplanetary missions,” he said.

The group working on the wafercraft are a long way off yet from firing one off in the direction of our nearest exoplanet, Proxima Centauri b, but it is aiming for a suborbital first flight next year. 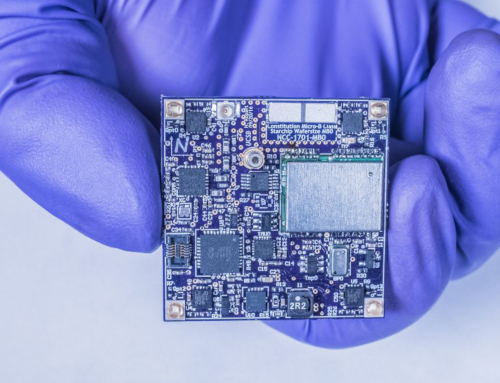