The day humanity walked on the Moon

Today marks the 50th anniversary of one of humanity’s greatest achievements – astronauts setting foot on another world for the first time.

This historic event captivated millions across the globe as people everywhere sat glued to their television screens in awe of an unfolding adventure that seemed so improbable, many to this day still believe was faked.

Why? Eight years earlier, the fledgling US space programme had just 15 minutes of manned spaceflight under its belt and much of the technology needed to touch down on the lunar surface (and return) did at that time not exist; not even the means to get them started on their intrepid journey in the first place as the powerful F-1 engines needed to launch a 36-story-tall, three-million kilogram rocket into orbit were experiencing combustion instabilities that caused destruction in milliseconds.

However the decision had been made and the following year president John F Kennedy told the world that the US "should commit itself to achieving the goal, before this decade is out, of landing a man on the Moon and returning him safely to the Earth.”

With what seemed an impossible goal on a seemingly impossible timeline, 400,000 personnel set to work to fulfil Kennedy’s highly ambitious plans.

Incidentally, this momentous moon landing occasion may not have have been captured at all, had it not been for some plucky Australian scientists and engineers, located at remote outposts a few hundred miles west of Sydney. Armstrong’s and Aldrin’s awe-inspiring moonwalk was to be televised – to around one-fifth of the world’s population – via the collaborative efforts of ground stations on three different continents, located at Goldstone, in California’s Mojave desert, in central Spain, and in southeastern Australia.

At the time of the anticipated first step, the giant 64-meter (210-foot) dish at Parkes, New South Wales, was in prime position to receive the all important TV images transmitted from the Apollo lunar module. But the eager astronauts began preparing for their moonwalk some six hours ahead of schedule after deciding to forego their scheduled rest break. This meant tilting the huge Australian antenna to a different position not favourable to its design in order to still receive the signal.

If that wasn’t difficult enough, winds of 60 miles an hour kicked in buffeting the giant Parkes dish around like a giant umbrella about to be sucked up into a tornado; conditions that normally would have halted telescope operations. But then this was not going to be just any ordinary broadcast, so Parkes director John Bolton bent a couple of rules and gave the go-ahead to keep the dish operating.

Luckily for staff at the facility, preparations to set foot on the moon took longer than expected and by the time the cumbersome spacesuits had been put on, the winds had subsided. This allowed the telescope transmitter, which had a power output of just 20 watts – about the same as a refrigerator light bulb, to pick up the signal beamed from a quarter of a million miles away as planned (or nearly as planned).

What happened next was a feat of human endeavour – an incredible triumph that paid homage to the thousands upon thousands of people who worked so hard to make it happen. And it was epitomised in a single phrase, that has resonated with humanity for the last 50 years; “That's one small step for (a) man, one giant leap for mankind,” declared Neil Armstrong as he stepped out of the lunar module lander and put his left foot on the Moon.

Buzz Aldrin would follow soon after, while their Apollo 11 crew mate, Michael Collins, orbited above. With his colleagues stepping where none had stepped before, Collins tended to his ship. "We felt the weight of the world on our shoulders. We knew that everyone would be looking at us, friend or foe, and we wanted to do the best we possibly could, and put our best foot forward. That required a great deal of work on our part, but not too much time left over for the things we more enjoyed," said Collins in a recent interview with Kennedy Space Center Director Bob Cabana while reminiscing about his experience on this famous mission.

Collins, who is now 88, turned down the chance to head NASA’s final mission of the Apollo program – Apollo 17 – as its commander; the position instead went to Eugene Cernan, who became the last person to follow in Armstrong’s and Aldrin’s dusty lunar footprints.

Despite the prestige attached to such an accomplishment, neither Armstrong or Aldrin ventured back to pick up where they left off; shortly after Apollo 11, Armstrong announced that he did not plan to fly in space again. Similarly, Aldrin returned to the Air Force after leaving NASA in 1971 without completing any further space missions. He retired in 1972 after 21 years of military service.

In fact, of all the 12 people who have left Earth to set foot on another celestial body, no one ever walked on the Moon more than once. 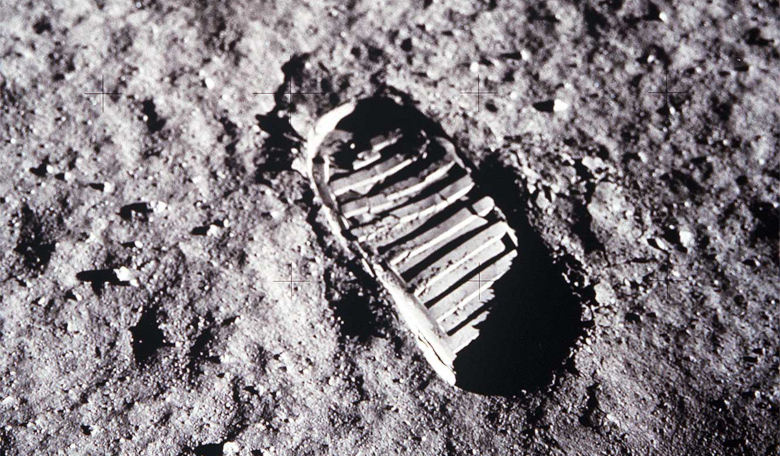 Apollo 11 Lunar Module Pilot Buzz Aldrin's bootprint. Aldrin photographed this bootprint about an hour into their lunar extra-vehicular activity on July 20, 1969, as part of investigations into the soil mechanics of the lunar surface. This photo would later become synonymous with humankind's venture into space. Image: NASA