Researchers using Voyager 1 data to study atomic emission at the edges of the Solar System, have found something amiss with the data or rather an excess, as recent analysis shows that the theoretical boundary where the Sun's solar wind is stopped by the local interstellar medium has a lot more hydrogen atoms in it than previously expected.

Launched in 1977, the twin Voyager 1 and 2 spacecrafts have proved to be one of the most remarkable missions for studying the outlying regions of the Solar System and the distant heliosphere. After 39 years of operation, these exceptional space probes are now the longest-lived and furthest human-made objects in the Universe.

Voyager 1 and 2 initially set out to explore Jupiter, Saturn, Uranus and Neptune, but once this task was complete, the twin spacecraft extended their mission to study the region of interaction between the solar wind (SW) and the local interstellar medium (LISM); an area which is also known as the heliospheric interface.

The first boundary of the heliospheric interface – the termination shock (TS) – has been crossed by both Voyager 1 and Voyager 2 in 2004 and in 2007, respectively. It is also reported that Voyager 1 is now ambling around the interstellar medium, having crossed the second boundary - the heliopause – in 2012.

The heliopause is the boundary of the heliosphere that separates the solar wind plasma (a soup of ionised gas made up of of positive ions and free electrons) from the interstellar plasma. Voyager 2 is approaching the heliosphere, but has yet to cross into it.

Previous computer simulations of the heliospheric interface have predicted that the intensity of light emitted from hydrogen atoms in this region should constantly decrease. However, data received from Voyager 1 while it has been waiting for its companion to catch up, suggests that this is not the case and instead it has remained constant.

This analysis is from data that Voyager 1 has collated between 2003 - 2014 and has been presented for the first time by an international team of astronomers, whose lead author on their recent research paper is O. A. Katushkina from the Space Research Institute of Russian Academy of Sciences, Moscow.

Curious as to why the intensity of light is not dropping off as expected, the team prepared further models to explain why this might be the case. Their analysis suggests that one reason could be that a dense layer of hydrogen atoms exists near the heliopause. If this is correct, then it would provide additional backscattered light that is not absorbed inside the heliosphere and could therefore be observed by Voyager.

Alternatively, the team suggest that the light has nothing to do with the heliopause and could be either galactic or even extra-galactic in nature.

At present, not enough is known about the extra light in order to give a definitive answer, but Voyager 2 is steadily winging its way to the region and its onboard Plasma Science (PLS) instrument is still functional (it has been switched off on Voyager 1).

The PLS has the ability to look for particles moving at particular speeds and, to a limited extent, to determine the direction from which they come. This could be helpful in determining if there is an over abundance of hydrogen atoms and if so, where they are coming from. This in turn could give important information on the local interstellar parameters and the physical processes at the heliospheric boundary. 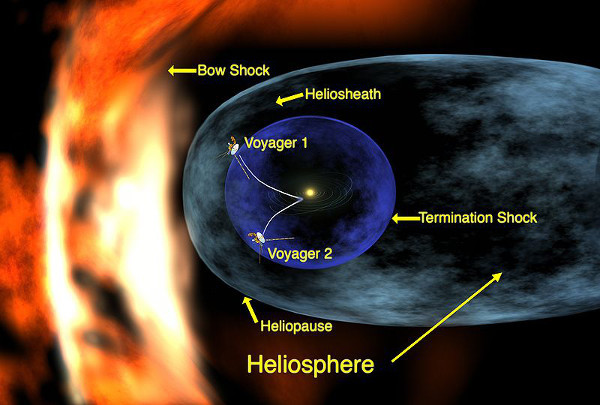 Image showing the locations of Voyagers 1 and 2. Voyager 1 has crossed into the heliosheath, the region where interstellar gas and solar winds start to mix. Image: NASA/Walt Feimer