Baikonur, Kibo and beyond: Japan’s leading role in space

Kimiya Yui became the fifth Japanese citizen in space when the Soyuz flight TMA-17M arrived at the International Space Station in July. Japan has long been active on the ISS, operating the largest module, Kibo, since 2008. With a second deep-space probe on its way to an asteroid, and the development of new satellites and rocket launchers, the country is playing a key role in international space activities.

On 23 July at 3:04 am, Soyuz TMA-17M rocket launched successfully into the clear, pitch-black sky over the Baikonur Cosmodrome in Kazakhstan. Just before the launch, the rocket’s destination – the ISS (International Space Station) - crossed the sky. While it was still visible near the horizon, the Soyuz rocket started its ascent, accompanied by a huge burst of noise and flames as it commenced its chase across the sky.

As a member of the Japanese government, I participated in the launch preparation process and had the chance to see every step, including the moment astronauts climbed on board. In this article I’ll outline the space programme from a Japanese perspective.

This was the 31st successful manned Soyuz rocket launch in a row, which makes it sound like business as usual. Yet making rocket launches appear routine is quite an achievement, not least because this launch came after problems with the Progress spacecraft in April and the failure of Dragon in June. 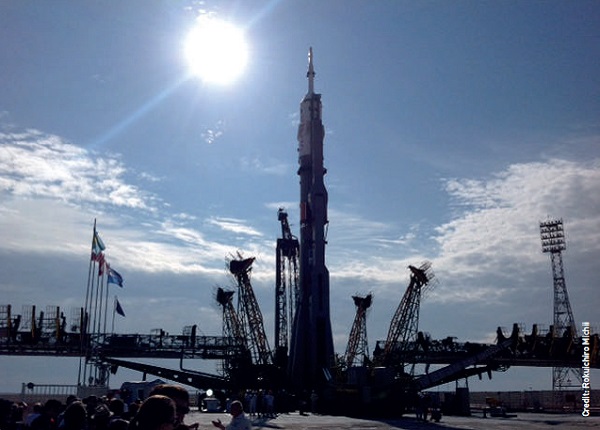 Successful launches are essential for the ongoing endeavour of human spaceflight. Soyuz TMA-17M was the transport for three astronauts: Oleg Kononenko of Russia, Kjell Lingren of the USA and Kimiya Yui of Japan – all on their way to carry out Expeditions 44 and 45 on the ISS. Five hours and 42 minutes after launch, they’d arrived - which is much faster than the 9.5-hour plane journey from Moscow to Tokyo.

Kimiya Yui is the fifth Japanese astronaut, and he is now conducting various assignments, including capturing the HTV (supply space vehicle), manipulating robot arms and carrying out scientific experiments. The experiments include protein crystallization, which is expected to be very valuable for medicine. It will enable us study the detailed structure of proteins so that we can design drugs that are optimized for treating particular diseases.

Japan has been a core ISS member since 1985, and has been operating the largest module, Kibo (‘Hope’), since 2008. As the ISS is now approaching the agreed termination date of 2020, the ISS members have been discussing the possibility of its extension to 2024. 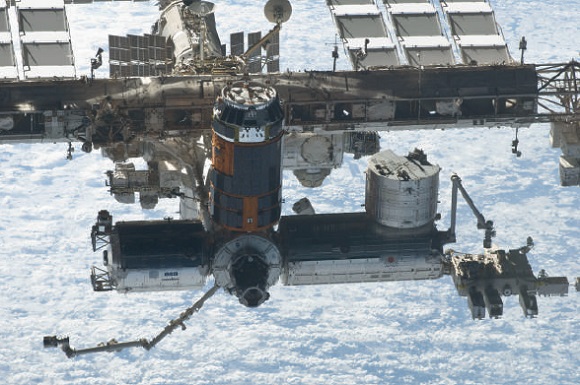 Seen at the bottom right, the experimental module Kibo is the largest on the International Space Station

Apart from the ISS programme, Japan has been devoting a lot of other resources to space exploration. The probe Hayabusa (‘Falcon’) landed on asteroid Itokawa and returned to Earth in June 2010 with asteroid samples seven years after the launch. It attracted a lot of attention, not least because communication with the probe was lost at one point. The dramatic story of Hayabusa was made into several films in Japan.

From satellites to deep space

In 2008, Japan enacted the Fundamental Space Act, and has formulated plans based on it since 2009. In the 2013 plan, six fundamental principles were decided. They were (i) peaceful use of space, (ii) contribution to the welfare of the nation, (iii) industrial development, (iv) development of society, (v) promotion of international cooperation and (vi) consideration of the environment. Under this principle, three programmes were identified to explore the frontiers for future space development. They were: space science and exploration; manned space activity; and space photovoltaic power generation. 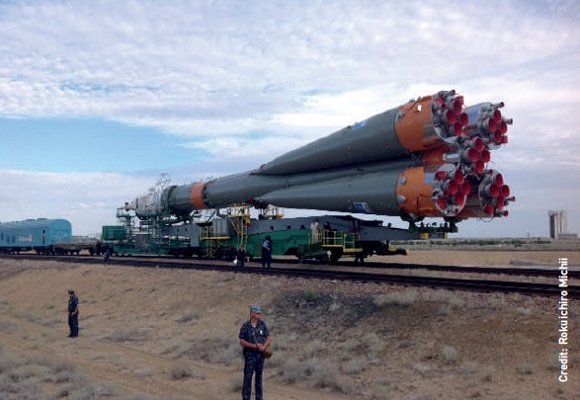 The Soyuz TMA-17M is transported to the launch site.

In its revision two years later, specific projects were listed. They included satellite positioning, satellite remote sensing, space transportation systems, scientific exploration and human space activity. The rule of law in space and enhancing international cooperation are emphasized too. It also refers to further contribution by Japan by utilizing its space technology as a solution to challenges such as energy, climate change and natural disasters.

Japan’s space exploration history dates back to the 1940s, and has recently been involved in a variety of interesting projects. One of those is deep space exploration. In December 2014, building on the experience gained from Hayabusa, another asteroid probe was launched from the Tanegashima Space Center. This probe, Hayabusa-2, is on its way to a C-type Near Earth Object, asteroid 1999 JU3. It was launched using a H-IIA rocket equipped with an improved mechanism. 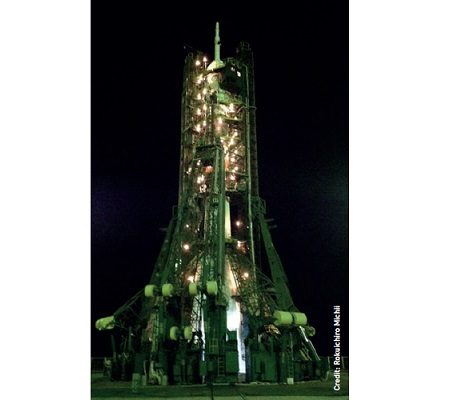 And it’s not just asteroids: Japan is conducting planetary exploration too. Currently, the Akatsuki (‘Dawn’) probe is on its space odyssey - in late July, it successfully conducted orbit adjustment in an attempt to place it in orbit around Venus. In addition, a Mercury probe project is underway. This is in collaboration with our ESA colleagues.

And then there’s the ISS. Japan’s major contribution has been the operation of the Kibo module but has also been providing a supply service with the cargo ship HTV Kounotori (‘Oriental Stork’). On 19 August this year it was successfully launched to the ISS, and delivered goods required by the six crew on 24 August. Astronaut Yui conducted its docking operation.

Thirdly, an enormous effort over a long period of time has gone into the development of rockets. The latest model, H-IIB, is the result. It’s made five consecutive successful launches since 2009, providing stable space transportation.

Another interesting project is the development of the Epsilon rocket. The experimental model, Hisaki, was launched in September 2013 and development of the enhanced model of this launch vehicle is going smoothly. Its aim is to achieve both high performance and reduction in cost. Currently, the goal is to launch the Exploration of energization and Radiation in Geospace (ERG) spacecraft in 2016.

Space experts have started to look beyond the ISS. After the termination of Apollo by the United States, human beings have not returned to the Moon. Should we go back there, or should we go much further - to Mars? And how could we utilize the ISS for these explorations? There are many questions we need to answer. In this sense, we are now entering a very important, probably historic period.

These new frontiers pose enormous challenges to human beings. In order for us to move on, we need to make right decisions in years to come. On Earth, regional and geopolitical questions continue to cast a shadow. These issues must be tackled with appropriate and acceptable solutions. But at the same time, the idea that space exploration can only be achievable through international cooperation needs to be recognized by a much wider range of people, not just by experts working in space institutions. Travelling to Mars is still far beyond our expertise at the moment - it takes over three hundred days to get there and back. Thus, international cooperation is essential. 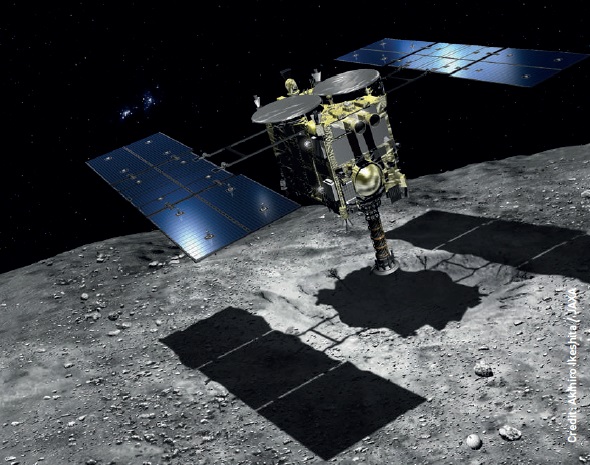 Hayabusa-2 is on its way to a C-type asteroid, which is believed to contain water and organic matter

Watching the beautiful scene as the Soyuz rocket lit up the night sky at Baikonur, I reflected on the fact that it was made possible by the effort of humankind - the future is indeed in our hands. In this respect, the cooperation between Russia, the US, the EU, Canada, Japan and other partners is encouraging. Among the international frameworks created in the last 70 years, the ISS convention of 1988 and its expansion in 1998 has provided the most advanced and tangible framework, and this achievement should be utilized for the next generation of human space endeavors.

Last but not least, I extend my heartfelt thanks to Mr Saveliev, deputy head of ROSCOSMOS, Mr Gersyenmaier and other colleagues from NASA, Mr De Winne from ESA and our JAXA colleagues including astronaut Wakata and, of course, the astronauts currently aboard the ISS, who inspired me to reflect on space cooperation. 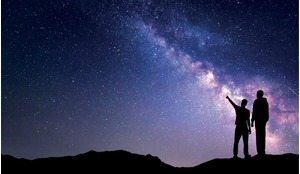 Publish or perish: the astronomer’s dilemma