Things are not business as usual in space. Broadening access to space technology and capabilities is a key driver in a landscape that looks dramatically different from the early days of the Space Age. This increased availability is leading to more innovation, lowering of costs, and greater access to beneficial capabilities and services available from satellites. Over 70 nations, private sector companies, non-governmental organisations, and even individuals, make up a rapidly growing community of space actors.

At the same time, the accelerated growth in space activities and the influx of new actors has the potential to exacerbate many of the current threats to the long-term sustainable use of space, such as the risks posed by long-lived space debris, on-orbit crowding, radio-frequency interference, and the potential of an incident in space sparking or escalating geopolitical tensions on Earth. Given these conditions, the US national security space community has characterised space as “congested, contested, and competitive.”

The international community, through the United Nations Committee on the Peaceful Uses of Outer Space (UNCOPUOS) and other forums, has been grappling with developing technical and non-technical solutions to these issues. While space sustainability has been approached traditionally as a government-to-government issue, the growing presence of commercial space ventures draws attention to the value of integrating private sector voices in the conversation.

In a space environment that is not only congested and contested, but heavily invested as well, private capital could advance our ability to protect critical orbits to sustain current operations and to support innovative and profitable development.

On October 28, 2014, Orbital’s Antares rocket exploded just 15 seconds after ignition on what would have been the third mission to deliver cargo and supplies to the International Space Station (ISS).

The failure destroyed 2,290 kg of cargo bound for the ISS, as well as 26 small satellites from commercial remote sensing company Planet Labs. While disappointment followed the accident, one theme resonated loudly: launch is a risky business.

Even if the launch of another telecommunications satellite may appear routine to the eyes of the world, the risk of failure is always present and the consequences of such a failure can be staggering. However, the risks faced by business managers in the commercial space world do not end there.

In the last 10 years, over 7,000 new pieces of orbital debris larger than four inches have been added to the most heavily used Earth orbits. The total amount of orbital debris, currently estimated at more than 500,000 pieces larger than half an inch, are concentrated in the same altitudes as more than 1,200 active satellites in orbit around the Earth.

With relative velocities in excess of 22,000 miles per hour, collisions with space debris pose a significant threat to the long-term health of active satellites. The growing space debris population has also increased the chances of debris-on-debris collisions, which can generate even more threatening debris.

Only France has adopted debris mitigation guidelines into law

The bulk of these new pieces of debris were created by just two events: an anti-satellite test conducted by China in 2007, and the 2009 Iridium-Cosmos collision between a functioning U.S. telecommunications satellite and an inactive Russian military satellite.

The consequences of those two debris-generating events have added to growing awareness of the issue of space debris, driving it to the forefront of international space discussions. In 2007, the United Nations and the Inter-Agency Space Debris Coordination Committee founded in 1993, brought to bear an international agreement on seven guidelines aimed at reducing the amount of debris that is generated.

While voluntary, the guidelines have begun to get some traction. In a 2014 report to UNCOPUOS, Canada and Germany presented a detailed study of country-by-country progress in debris mitigation, especially debris created through launch activities. 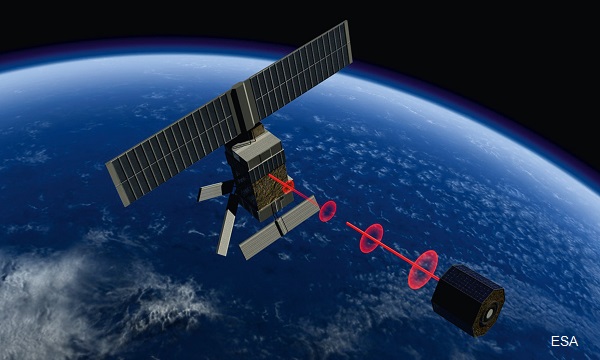 Furthermore, the guidelines have been codified into space law of at least one country, France, and have been incorporated into the standard practice of the United States.

Progress has been made in limiting the creation of new debris, but an enduring challenge is the possibility of cascading collision events occurring with the objects already in orbit. Less than a month after its April 2013 launch, Ecuador’s very first satellite, Pegaso, collided with what appears to have been a small piece of debris from an old Soviet-era booster.

While not a direct collision, Pegaso’s impact with the booster’s debris field damaged the cubesat and interfered with its attitude controls so that it was able to successfully transmit data for only seven days.

Scientists believe that there is enough human-generated space debris in the critical low-Earth orbit to enable the growth of debris through random collisions between objects already in orbit. The phenomenon, known as the Kessler Syndrome, would lead to an increase in the number of pieces of debris even if no more satellites were launched, thus escalating risks to spacecraft and human spaceflight activity in orbit.

Another powerful externality is the growing problem of radio frequency interference (RFI) as many satellite applications and services use a handful of common frequency bands. This has led to a growing competition for spectrum and incidents of both unintentional and intentional interference or “jamming,” not just between satellites but between space and terrestrial services as well.

Space debris and radio frequency interference are two of several space sustainability challenges that have resulted from the growth in space activities, leading to an environment that has indeed become congested and contested. But a third dynamic is also occurring.

The higher volume and diversity of activity in space result from the fact that space has also become invested. In an environment where commercial players that are reinventing assumptions about just how much it costs to be in space are as much a household name as the traditional players, space sustainability cannot be perceived solely as a government-to-government issue.

The realisation that efforts to address complex threats to space sustainability will require the involvement and support of the broadest community of actors is beginning to take hold in the international space forums. For example, a UNCOPUOS working group tasked with producing best practices for space sustainability sought to engage the increasingly diverse global community of space actors, soliciting input from member states, intergovernmental organisations, and private institutions as it developed the guidelines.

Space debris is playing an increasingly important role in mission planning. Business managers have to work in an environment where the possibility of a collision could ruin their business plan, and destroy the financial stability of their organisations. In this environment, accurate knowledge of the location and trajectory of objects in orbit, also known as space situational awareness (SSA), is invaluable.

The US military has the most comprehensive SSA capability in the world. Relying on this capability, the Joint Space Operations Center (JSpOC) uses the known locations of satellites, estimated trajectories of trackable pieces of debris, and other variables to predict where space objects will likely be a few days into the future. Through this process, known as conjunction assessment, JSpOC provides warnings of possible collisions to satellite operators, who then determine whether or not to manoeuvre the satellite in question.

Although the US military’s efforts are a good first step, there is still much that can be done to improve our ability to deal with space threat. While the US government and other policymakers and experts are exploring initiatives to improve SSA, non-government efforts have also emerged.

The Space Data Association, a non-profit organisation created by three major commercial satellite operations in 2009, provides its members, which include 20 commercial satellite operators and three government agencies, with services that enhance the JSpOC warnings and include assistance with resolving instances of RFI. Last year Analytical Graphics, Inc. announced the establishment of the Commercial Space Operations Center, which plans to offer paid subscription access to information and services provided by a private version of the JSpOC.

In the last decade, over 7,000 new pieces of orbital space debris larger than four inches have appeared

Active debris removal (ADR) is another area that has seen the emergence of proposed commercial solutions. Numerous technical solutions have been conjectured to remove either the pieces of debris too small to track but that pose a risk to active spacecraft, or the large objects that likely to collide with others and thus create new debris.

Among the objects posing the largest risk of creating additional debris is Envisat, an inactive European Space Agency (ESA) Earth observation satellite with a mass of 8,000 kilograms. The satellite, along with nearly a dozen spent Russian rocket upper stages of a similar scale, represents one of the top public space debris problems. 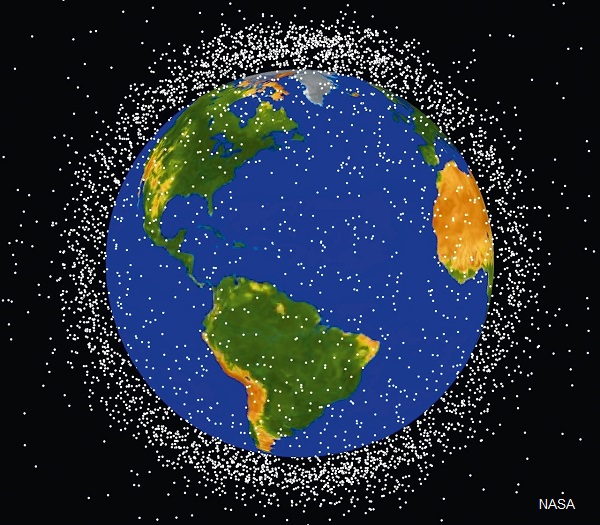 A number of policy, legal, and regulatory questions will need to be addressed both nationally and internationally to advance workable ADR solutions. Among the questions raised are how best to communicate intentions so that proximity operations in orbit are not misinterpreted as harmful action, how to determine ownership of unidentifiable pieces of debris, and how to assign liability with respect to ADR operations. Given the current obstacles and a questionable business case under present market conditions, most ADR proposals are met with scepticism. However, many experts agree that ADR will need to be an element in a larger strategy to deal with space debris.

Growing awareness of the political and economic value of addressing the risks posed by space debris demonstrates the value of improving coordination and cooperation among the diversity of space actors. In the current space environment, business solutions that work in tandem with the adoption of best practices and other legal and regulatory mechanisms may represent innovative and cost-effective solutions for addressing space debris and other complex threats to long-term space sustainability.

Today’s space environment features a large number of space actors pursuing a diverse range of activities for scientific, economic, and social benefit. These conditions have led to advances in space-based benefits and services, but could also accentuate threats to the long-term ability to use space. Key among these threats is space debris, which poses risks for the space assets of all operators – whether it is nations launching their first satellites or commercial companies adding new capability to a large constellation.

In an environment that features commercial space activity like never before, improved engagement with the private sector will be key in enabling the success of space sustainability measures. Moreover, the very element of financial risk could drive the development of innovative solutions for the challenges facing the entire space community.

Space sustainability should be viewed as a business problem both from the perspective of risk and of opportunity. There is an opportunity for the commercial space community to start thinking about what it means to be invested in space. Private investment and innovation, coupled with the development of international legal, policy, and political measures, can contribute in maximizing the efficiency and effectiveness of using space for the benefit of humanity. 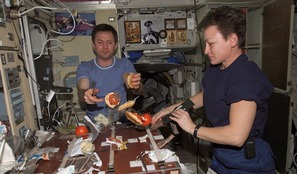 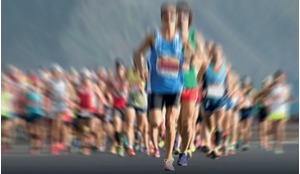