Asgardia’s calendar and its role in space industrialisation strategy

Currently, there is no single global standard for the calendar year. In space, none of the geocentric, terrestrial analogue calendars used today (of which there are about 40) makes practical sense. For strategic purposes, celestial navigation and astrodynamics, they are effectively useless. In an attempt to rectify the situation, the space nation of Asgardia – which was formed in October 20167 – has developed an astrocentric, fixed-standard, 13-month reference calendar.

The Asgardia calendar is focused on the 88 major constellations listed in the catalogue of bright stars, of which 13 zodiacal constellations are on the ecliptic. The calendar is based on atomic clocks and is designed to indicate a single time in all possible spacecraft, including the Earth as one such ‘equipotential spacecraft’. This article describes the basic strategic principles of the astrocentric fixed 13-month reference zodiac calendar of the space state of Asgardia.

The issue of the reform of the geocentric analogue Gregorian calendar began to be actively discussed in the 19th century, when its logical shortcomings were revealed. However, all attempts to optimise the calendar, to reform it and, in particular, to produce the correct fixed form, have so far been unsuccessful. 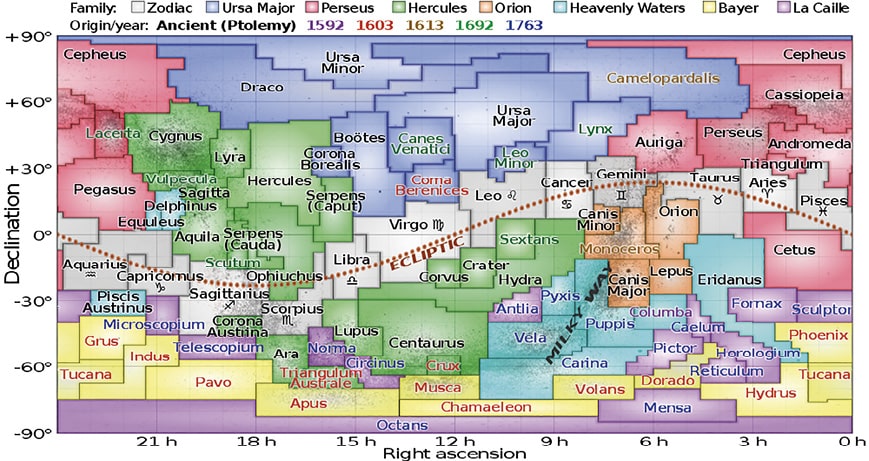 The exceptional complexity of the issue and a large number of failures led scientists to conclude that the task was impossible, even theoretically. This was because the astronomically certain length of the solar (tropical) year in days cannot be expressed as a multiple of seven, or even an integer, in order to make a universal calendar that is suitable for each and every year. And this is why a single, 13-month reference calendar has been proposed by the author on behalf of the space state of Asgardia. It is based on a strict digital mathematical model and is not associated with conventional, geocentric analogue models of the Earth’s motion around the Sun.

In space, none of the geocentric, terrestrial-analogue calendars used today (of which there are about 40) makes practical sense 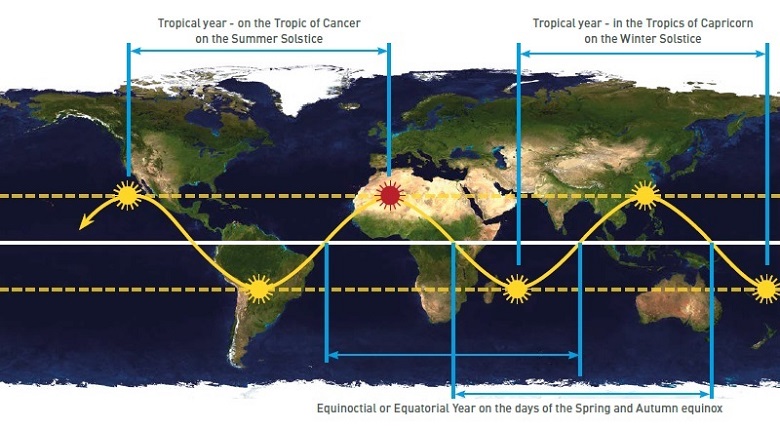 Thus, the accuracy of the calculated tropical calendar after correction is regulated by ‘plug in leap years’ with a frequency of 31/128 = 0.2421875 days (that is, 5 hours 48 minutes 45 seconds, or 20,925 seconds). The correction has a perfect averaged accuracy, in that the error of the calculated tropical calendar in relation to the real tropical astronomical year after the mathematical correction procedure is on average zero [see Box 2: solar calendar accuracy].

The ideal core of the standard 13-month reference calendar consists of 364 days: 52 weeks of 7 days each (Table 3). Each of the 13 months have the conventional names of the ecliptic zodiac constellations and contains exactly 28 days: (I) Aquarius; (II) Pisces; (III) Aries; (IV) Taurus; (V) Gemini; (VI) Cancer; (VII) Leo; (VIII) Virgo; (IX) Libra; (X) Scorpio; (XI) [Serpentarius, Ophiuchus or Apheuhus] (Asgard [Ásgard in Scandinavian mythology - heavenly city, abode of the gods] or Horus, one of the most important Egyptian gods or Ashur, the name of the main God of Assyria); (XII) Sagittarius; (XIII) Capricornus.

Each of the four quarters contains exactly 91 days. In a normal year, there are 365 days (including ED - Extra Day). In a leap year, there is an additional 366th day (EDD - Extra Day Duplicate). The name EDD has alternative names: LD (Leap Day) and BD (Bisextile Day or the same Leap Day). 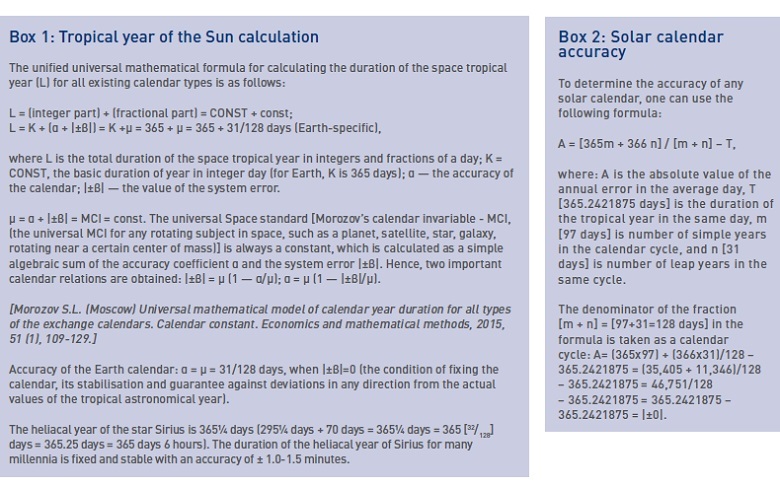 Therefore, each new year always begins with the first day of Aquarius, Sunday. We consider the calendar as a mathematical digital time counter. From Table 4, it follows that the days of the week in the traditional calendars (in the bottom row of each cell of the calendar matrix) are mobile: at the beginning of each ordinary year they are shifted one day of the week forward, and the beginning of each year, following the leap year, is shifted immediately two days of the week forward with the immutability and constancy of the numerical series relative to each other. 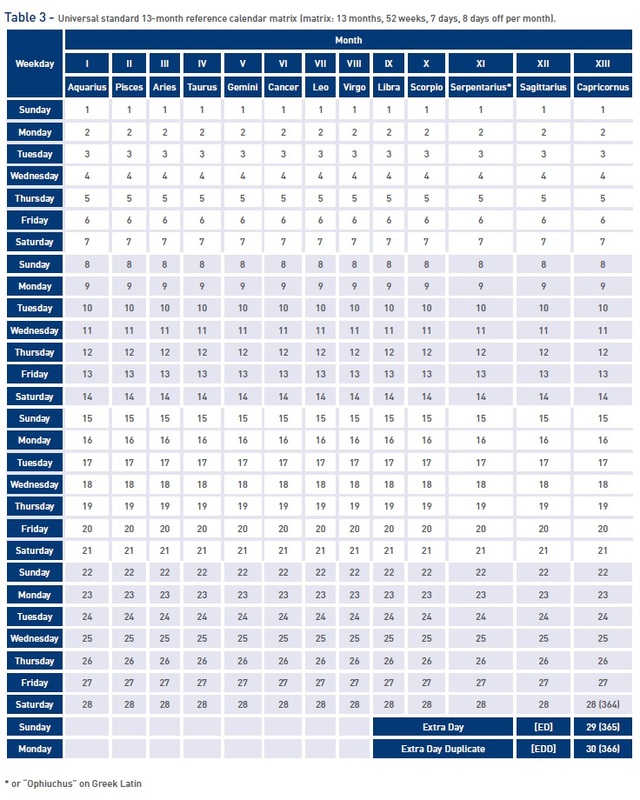 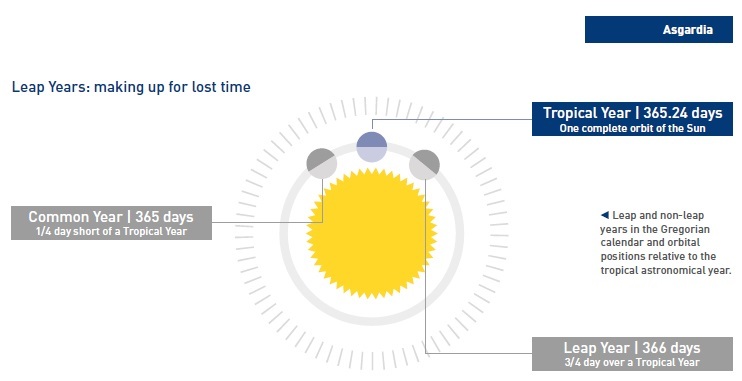 In the Asgardia calendar, each new year always starts on the same date and on the same day of the week. It allows one to have the same universal day all over the world (the top row in each cell of the calendar matrix), which saves tens of thousands of tonnes of paper, dyes, printing and transportation costs.

With constant (fixed) rows of numbers in the calendar matrix of the permanent calendar and with a variable grid of days of the week at the bottom of the current scale of the permanent calendar, the dates of events will always remain identical: this includes holidays, dates of launch windows into space, schedules in schools and universities, parliaments, network schedules, stock and bank calculations, etc. They will remain fixed from year to year and will not require, as is the case now, any annual recalculations.

The upper universal (absolute) series of numbers of the calendar matrix in each cell never changes. This makes it possible to bring to a single mathematical denominator any specific calendar system placed in the second (lower) row of each cell of the calendar matrix (Table 4). For each cycle of 128 years, only two types of calendar are used: leap and non-leap, which differ only in the number of days related to the new year (three days in a leap year and two days in a non-leap year). In all other respects, the calendars are absolutely identical.

In the proposed calendar, the numerical axis of history is divided into uniform cycles of the same type (128 years each) and contains two rows of numbers: the upper universal and the lower Gregorian (VG). The date is recorded in two ways: universal (UM) and ordinary, according to the Gregorian calendar. For example, 1 Aquarius 0003, Sunday (UM) / 1 January 2019, Tuesday (VG). 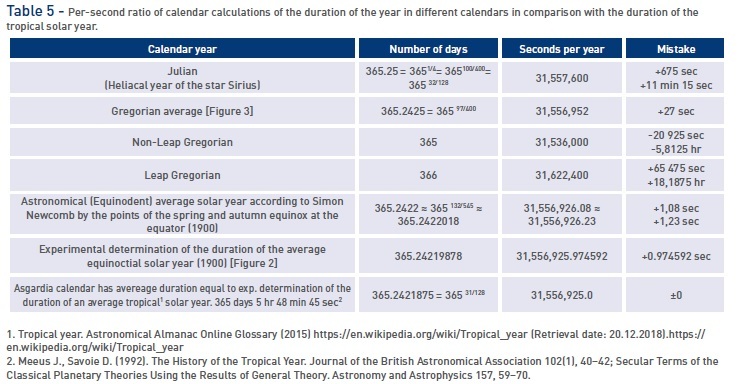 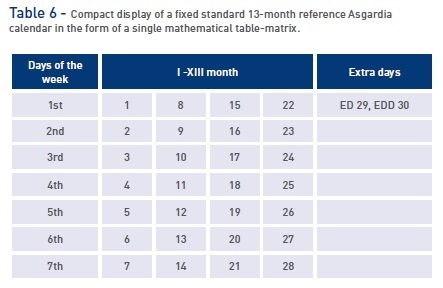 The calendar itself was implemented by Igor Raufovich Ashurbeyli, Head of state of Asgardia, Decree No. 2 from 1 January 2017 and approved by the Parliament of Asgardia dated: Virgo 13, 0003 //July 28, 2019. The calendar is intended to ensure international cooperation in the strategy for the industrialisation of space. The standard 13-month reference calendar of the space state of Asgardia is a purely civil neutral calendar for the first time in the history of civilization. It does not serve any religious groupd or political parties. It is designed to serve the purely economic tasks of the new space society, the new space socio-economic formation.

Sergei Lvovich Morozov studied at the Medical Institute and graduated from the University of Izhevsk in 1976. He also graduated from the Moscow Research X-ray Radiological Institute of the Ministry of Health of the Russian Federation in Moscow in 1985, from the Finance Academy under the Government of Russia in 2002, and completed doctoral studies in Central Economics and Mathematics at the Russian Academy of Sciences in 2016. Morozov has been the chairman of the board of Elbimbank (1990-2000), adviser to the Secretary General of the EurAsian Economic Community (2005-2008), a senior research fellow at the National Development Institute of the Russian Academy of Sciences (2017) and a Member of the first Parliament of Asgardia (2018). 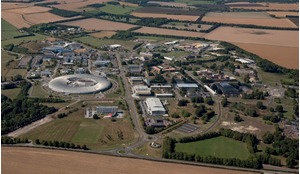