Finding asteroids before they find us

On 13 February 2013, Lord Martin Rees, Astronomer Royal of the UK, and I wrote a commentary for the Wall Street Journal entitled: “Playing Cosmic Roulette with our Future.” Our aim was to awaken the world to the imminent danger of asteroids impacting Earth and how – of all natural disasters – this is the only one we know how to prevent.

What we didn’t know at the time was that a small asteroid was already on its way. Traveling at 40,000 mph it exploded over the city of Chelyabinsk, Russia, just after 03:20 UTC. And, with a force of about 500 kilotons of TNT or 30 times more energy than was released from the atomic bomb detonated at Hiroshima, it blew out windows, destroyed buildings, creating hundreds of thousands of dollars of destruction. It also injured 1,500 people.

And, not one single operational telescope or eye-on-the-sky looking for such asteroids saw it coming.

The last major asteroid impact on Earth was on June 30, 1908, when a space rock about the size of an office building (140 feet across) slammed into Siberia with a destructive energy impact 700 times that of the Hiroshima bomb. That asteroid devastated a region of 800 square miles (2000 sq. kilometers) and a forest of more than 80 million trees. If this had impacted a metropolitan area, the blast zone would have been the size of London, Paris, or Washington, DC.

To date, we have identified the trajectories of less than one percent of asteroids, or about 10,000 that cross Earth’s orbit that are larger than that of Tunguska, while we estimate about one million such asteroids in dangerous orbits actually exist. 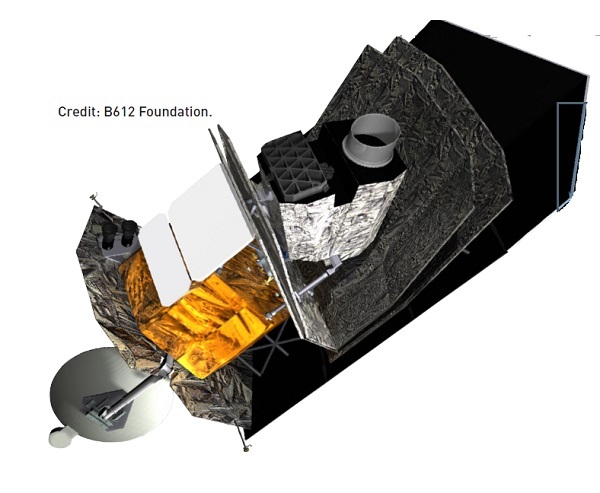 The Sentinel mission will discover and track near Earth objects.

So, a little over a decade ago, I joined with Apollo 9 Astronaut Rusty Schweickart, planetary scientist Clark Chapman, and astrophysicist Piet Hut to found an organization called the B612 Foundation. Our goal was to explore ways to deflect or destroy threatening asteroids. As asteroids orbit the Sun and the Earth orbits the Sun, our aim was to find the most cost-effective way to change the orbit of the asteroid ever so slightly, just to set it off course and not intersect with Earth. Over the years, we studied multiple options, from exploding a nuclear bomb near the asteroid to more recently sending robotic spacecraft on a high-velocity collision course.

By 2010, one of the best options that emerged was our model for a “gravity tractor.” Along with my colleague Dr Stan Love, we devised that we could take advantage of the gravitational attraction between a hovering spacecraft and the asteroid, and the tug of the spacecraft could nudge the asteroid off course just enough to pass before Earth.

But the big discovery was that whatever means we would employ there was a single over-riding condition that had to be met before we could prevent an asteroid impact. Principally, we had to find and map asteroid trajectories years, if not decades, in advance. We were certain of one thing: you can’t deflect an asteroid you can’t see.

We are at the beginning of a new era, where private organizations can now conduct grand and audacious aerospace and science missions, previously only possible by governments.

Asteroids are like pieces of charcoal, flying at more than 40,000 mph against the black backdrop of our inner solar system. They fly close to the Sun and absorb most of the visible light that hits them. That is why they are so difficult to detect. Switch to using an infrared telescope and the faint heat they give off is more readily detectable. 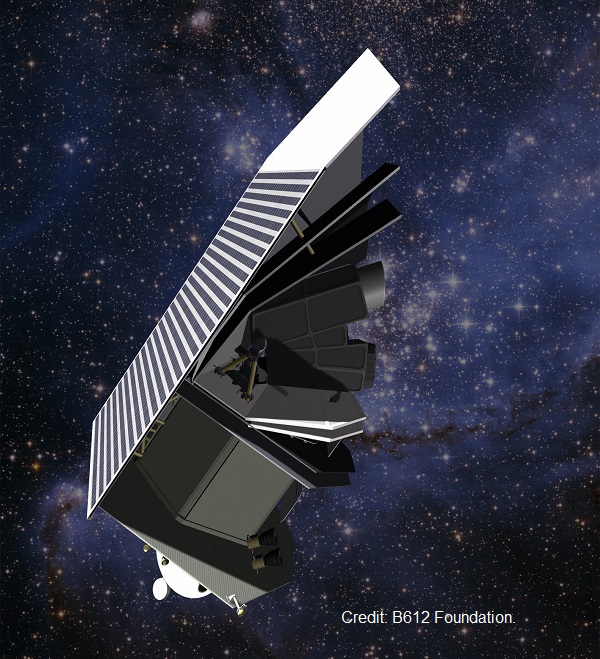 The Sentinel mission will help keep the Earth safe from approaching asteroids.

In 2012, knowing that the challenge was to find, track and map asteroids before we could move them, we announced that the B612 Foundation would now be focused on building and operating an infrared, cryogenic space telescope in orbit around the Sun – looking at Earth with the Sun at its back. We selected esteemed planetary astronomer Dr. Harold Reitsema, with 30 years of experience at Ball Aerospace in designing and building of interplanetary spacecraft and astronomical imaging detectors, to be Mission Director. Sentinel would be the first proposed deep space mission to be modelled, built and funded in the private sector. 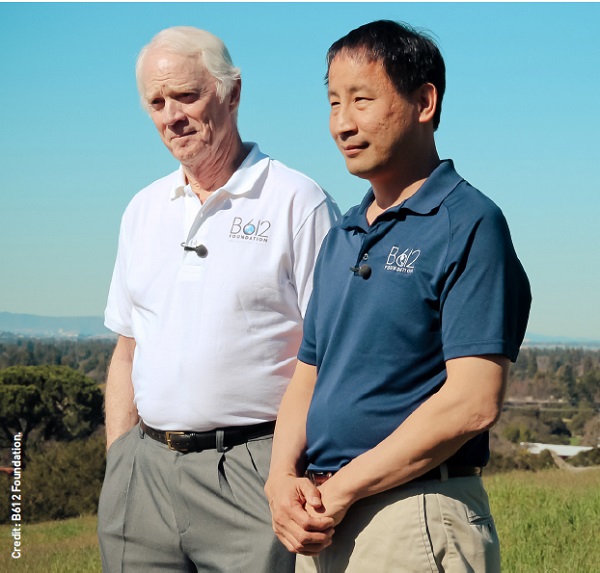 Astronauts Ed Lu and Rusty Schweickart are dedicated to finding a way to stop dangerous asteroids from impacting Earth.

Sentinel will be launched toward Venus and with the assistance of that planet’s gravity, then orbit around the Sun about 30 million miles inside Earth’s orbit. This will permit Sentinel to see asteroids when they are close to the Sun, when their heat is most strongly seen in the infrared spectrum. Also, Sentinel’s proximity to the sun will let it generate twice as much power from its solar panels as it would in Earth’s orbit. Three tiers of sunshades will protect the telescope, while we will protect the infrared detector with a special cryocooler, built by our partner Ball Aerospace. Sentinel will use three mirrors to provide us with an unobstructed view of the sky. Sentinel’s camera will image a large field of view from its 16 individual infrared detectors. With this system, we can scan the sky repeatedly - looking for moving objects and mapping the trajectories of asteroids to see if any could have our name on them. 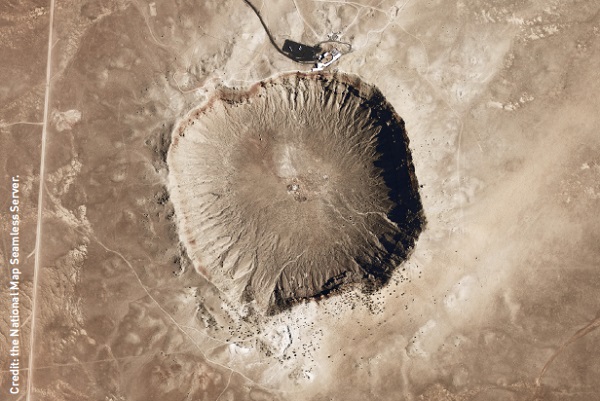 A recurrence of Meteor Crater, Arizona, is what the B612 Foundation hopes to avoid.

“We’ve been given a gift, and the gift is that we have the ability now to go out there and actually do something that positively affects the future of humanity on Earth.” Space Shuttle, Soyuz, and Space Station Astronaut Ed Lu B612 Foundation Founder & CEO

The University of Colorado’s Laboratory for Atmospheric and Space Physics will be the first to review the data, followed by the Minor Planet Center of the Smithsonian Astrophysical Observatory who will then send their findings to NASA’s Jet Propulsion Lab in Pasadena, CA for analysis. Then the data will be made public.

We are at the beginning of a new era, where private organizations can now conduct grand and audacious aerospace and scientific missions, previously only possible by governments. Mapping the great unknown of the inner solar system is one of those missions – and it is the first step to opening up this next frontier, while protecting Earth from dangerous asteroids.

On June 30, 2015, we will celebrate Asteroid Day, the brainchild of young British filmmaker Grigorij Richters and Astrophysicist Dr Brian May, lead guitarist of QUEEN. It will be a day to raise awareness of the asteroid threat and what we can do to save our Earth and families and all that we value on this planet. More than 100 scientists, physicists, and business leaders have signed a declaration to increase the detection of dangerous asteroids by 100 times.

We invite all of you to join us. 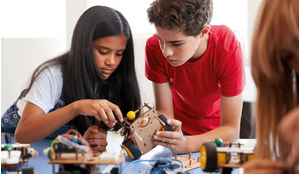 Inspiring the next generation into STEM