Promoting growth at geostationary orbit with a one-stop-shop

Historically, the thing that stifled growth in the geostationary orbit market is the sheer cost of launching a spacecraft that high into space. If you’re a customer wanting to put a spacecraft into the 36,000kmhigh orbit, you’re probably looking at an entrylevel cost somewhere between $200-300 million just to deploy your system.

One of the things we’re striving to do is to reduce that cost. We have regular customers with requirements, needs, new services and applications, so many great ideas, but when they look at the cost of deploying a satellite into that orbit they just can’t close their business case. So we can see a part of the market that is currently under-served.

A decade ago we started developing a small geostationary platform to address that market, which is quite varied. Some of the smaller countries own independent frequency rights and want to put up a satellite to address their own needs; there are also new-entrant operators trying to establish markets; and there are existing operators who want to demonstrate new applications and services.

People thought that we were all about servicing developing countries and academia with lower-orbiting spacecraft. But we’ve always thought way beyond that.

There is a varied cross-section of the market and all would be interested in a smaller platform but the issue with geostationary orbit is that it is a finite resource, a single orbit that has to be shared by a number of spacecraft. The physical locations are limited. The orbit is broken up into 0.5 degree slots, so 720 slots, and the maximum that an operator is allowed to place into any one particular slot is about 8 spacecraft.

As of November 2014, there were more than 400 active satellites in geostationary orbit. The majority are communications satellites but there are some meteorological satellites there too.

It is not just physical space that is limited. Radio frequencies are also limited. You have to share the radio spectrum with other users. And there are a lot of people operating on the lower frequencies, C band, KU band, and now KA band. When that gets congested people look into moving up into the higher frequencies. Now there is highfrequency QV band. Broadband was a relatively new market when we started to look at this but now it’s much more established. 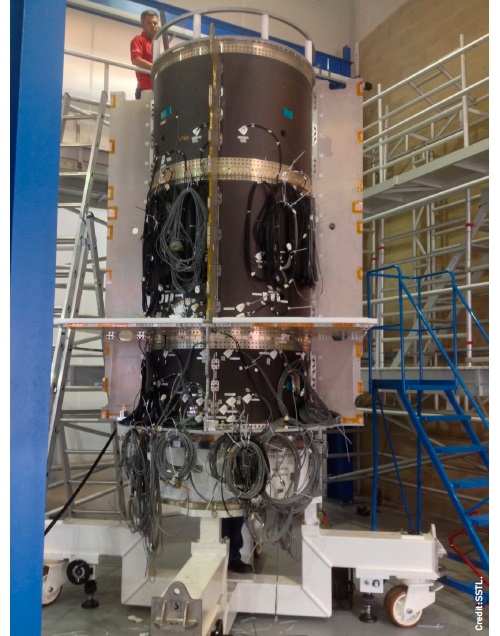 So, the whole premise of the smaller geostationary platform was to enable us to stimulate and grow that market. Although the first one that we’re in the process of securing isn’t that small. It’s a 3.5 tonne geostationary mini-satellite platform (GMP-T) and is actually the larger end of our product spectrum. The reason for going to the larger size is launch cost. Until recently, a static price was charged for anything beneath 3.5 tonnes. Whether you were trying to launch a thousand kilos or three and a half thousand kilos, they charged you the same price. Hence, we’ve been focusing our attention on the top end of that spectrum, but in parallel working with providers to drive the launch costs down with the aim of being able to launch a thousand kilos in the future for less than $50 million.

Happily, we are beginning to see a shift in the thinking of some of the launch providers. It helps that the environment is much more competitive with the likes of Space-X. It’s shaking the industry quite a bit.

At the same time, large operators are also seeing the virtue of smaller, more flexible satellites. The traditional view is that operators would buy bigger and bigger satellites, especially if the launch cost is fixed and the satellite platform cost is fixed.

In that case, the more capacity you can put up the better because the more you can spread those costs, which is fine but what a lot of big operators are finding is that they want fleet flexibility. They want to be able to move satellites between different locations and if you have 300 transponders on a large satellite, then moving it from one slot to another as business needs change, is not always convenient. So a smaller satellite gives a greater degree of business flexibility.

GMP-T development began in early 2000, funded by SSTL and a grant from what was the British National Space Centre at the time. The plan was always to develop a sub-1000 kilo platform. This work led to winning a role in building Galileo, the European GPS system.

At the conclusion of the work on Galileo, we came back to developing the geo platform. Working with help from the European Space Agency’s Advanced Research In Telecommunications Systems (ARTES) programme, we developed the satellite’s structure and a high-power power system. Up until then, the largest power system we’d done was a couple of hundred watts, yet we needed something that was 5 kilowatts. ARTES allowed us to develop & qualify both because these were the key building blocks we could use to try to secure a customer for that first geo platform.

If all goes to plan, the first customer will be Eutelsat with a satellite called Quantum. They would be the anchor customer, giving others confidence to sign up too. We’ve got a lot of people that are interested in what we offer but everybody wants to be number two.

…the whole premise of the smaller geostationary platform was to enable us to stimulate and grow that market.

The difficulty with this product and customer base is that the costs involved make for a really risk-averse environment. People want to see somebody else go first. So by securing an anchor customer it means we’ll have our first programme and then a number of interested customers will line up to sign subsequent contracts.

In this brave new world of satellite solutions, even owning a satellite might not be necessary any more. SSTL has signed an agreement with Kyprosat, a Cypriot company who own a number of geostationary orbit slots. This allows the companies to jointly offer a one-stop shop to orbit.

Kyprosat works on a fleet-management business model. This is an extrapolation of the shipping industry where a company owns the ships, then leases them to other people. Kyprosat has filed for a number of frequencies through the Cypriot regulatory authority and their idea is to deploy a number of satellites into their slots to provide services, and to lease those assets out to other customers.

SSTL’s GMP platform is perfect for Kyprosat’s needs as it can offer smaller domestic telecoms operators in emerging markets an affordable entry opportunity. This should reduce the price point, stimulating and cultivating new markets. A customer could market-test a new application on a smaller spacecraft initially, enabling them to prove the concept. As their business grows, so they can then buy their own satellite.

At the same time the GMT will allow SSTL to grow its own ambitions.

One of the reasons we started the GMP development was to develop our beyond-LEO capability. If you look at our last 30 years, most of the spacecraft have been lower-orbiting, and we were beginning to suffer a perception issue. People thought that we were all about servicing developing countries and academia with lower orbiting spacecraft. But we’ve always thought way beyond that.

I think space is in its infancy. I equate it to the model-T Ford and the Wright brothers. I think we’ll see massive growth. What is the stimulus? What will the growth be? Elon Musk is talking about humanity being a multi-planetary society. People are talking about settlements on the Moon and settlements on Mars but to achieve those goals you need infrastructure, communications, and navigation to map the areas. If it costs a billion dollars to put a Mars relay in place, there won’t be many Mars relays. So you need to drive the price performance point appropriately, you can deploy that infrastructure in a cost-effective manner, and by doing that you can start to drive and stimulate those markets.

Our vision is looking at Earth and beyond; to be involved in lunar activities; in the interplanetary and remote planetary activities. We think it needs a commercial mindset to stimulate that drive.

To drive these price points to the correct level you have to constantly look around and exploit developments in all sectors. For example, we’ve done well in LEO by exploiting advances in mobile electronics, in other words we use chips used in mobile phones. At the same time you have to challenge a customer’s stated requirements. 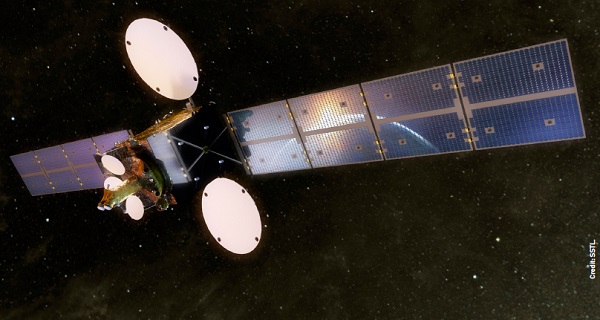 An artist’s impression of the SSTL GMP-T platform in orbit.

What we have often found is that 80–90 percent of the cost can be driven by 10–20 percent of the requirements. If you have a billion-dollar system, if you actually look at your requirements carefully, and challenge them, you can collapse the cost of the system considerably. We get the customer to focus on what is good enough not what’s on their ideal wishlist.

We were involved in a maritime communications system. At one point, the customer was looking to include a ‘safety of life’ requirement. This means that in the event of an issue on a ship, the system could be used for emergency communications.

That requirement drives the price of the system up massively because if you’re going to use it for safety of life, it needs a high degree of availability and robustness. Most of the other applications they were looking to offer did not require such availability.

I think space is in its infancy. I equate it to the model-T Ford and the Wright brothers. I think we’ll see massive growth.

Such critical challenges can be a problem with the purist science community because that idea of compromise can be alien to them. The precision to which they need to take a measurement in order to advance their science can be quite extreme and that then tends to drive the costs. They’d much rather have a billion-dollar programme that takes 15 years, and get their ten-decimal-placemeasurements, than they would do a programme that takes a quarter of the time, a quarter of the cost, yet returns a precision of just five decimal places. Hence, science with such fidelity will continue to be carried out by the space agencies.

Where we bring value is that we commoditise science. Think weather services. Just 10 years ago, many of today’s weather services would have been considered science. For example, a purely scientific payload to measure ocean wave heights may have been deployed. Now we don’t think about that as science, it’s a climate services whose data can be sold to paying customers. Whereas before you’d be thinking about putting up a high fidelity scientific instrument, now they’re looking at a more commodity-type payload to address that market.

In terms of changing the economics of space, thinking is evolving. Technology is becoming available at the right price point and people are taking advantages of advances in technology and reduction in prices.

It stimulates a new way of thinking and that will open up space as never before. 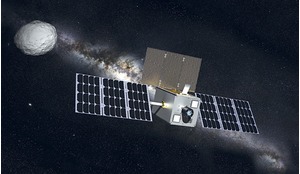 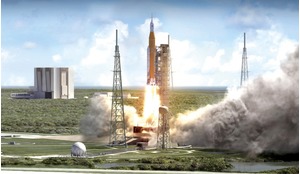 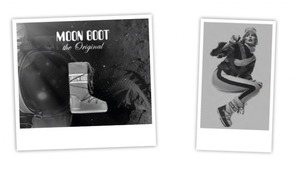