Could the Catalina Sky Survey be improved to find even more asteroids - especially those like 164121 that might threaten Earth? In 2014, NASA asked this question. It turned out that another group was also interested in answering the same question - but for a different reason. The answer could be found in a novel collaboration between industry and NASA, which we will discuss later.

Collaboration between governments and commercial space companies is not anecdotal but part of a growing trend. There is an increasing overlap between private and government space initiatives. Not only is there an overlap in interests but there is also a developing symbiotic relationship between these two groups. These collaborations are truly mutually beneficial and not just the traditional public-private partnerships with a customer and contractor arrangement.

One industry at the forefront of these new public-private, symbiotic relationships is space resource utilisation and there are several reasons why the space resource utilisation industry is working with the governments of the world. As humans explore the Moon and beyond, there will be a need for resources for life support and to operate in space. It will become desirable to construct things in space rather than expend the energy and funding to lift them from the surface of the Earth. And, as the population of Earth grows, there will be a greater demand on food supplies and resources. There is also a growing awareness of the need to identify and protect us from objects in space that could obliterate life on Earth.

All of the aforementioned activities bridge government and commercial interests. Several space resource companies have been created in the United States and, unsurprisingly, the US Government is taking steps to embrace this new industry to support its own interests in space. In addition to the United States, the Government of Luxembourg and the United Arab Emirates have recently announced their own initiatives to support the space resource utilisation industry.

These cooperative initiatives cover three areas - law, technology and missions/markets. Individual nations and multilateral organisations are working on initiatives in all of these areas.

The 1967 Outer Space Treaty (OST) provides the framework by which all nations utilise and operate in space. The OST is an incredibly forward-thinking document that has kept space a useful and peaceful environment since the beginning of the Space Age, and fostered a variety of space activities ranging from military to science to commercial operations.

Whilst the OST describes the general concepts for responsible and peaceful use of space, the actual implementation and effect of the OST is found in domestic laws. Over time, many nations have developed their own laws to meet their OST obligations and have used the United Nations and other international forums to discuss the relationship between their respective domestic laws.

In 2009, asteroid mining company Planetary Resources was formed and rapidly brought this decades old debate to the forefront. Recognising the value of having companies like Planetary Resources on its home territory, the US Government set out to determine the legality of asteroid resource ownership.

In November 2015, the United States’ Congress passed carefully crafted legislation that recognised the right of private companies to own resources they obtain from asteroids and a few days later President Obama signed the legislation into law. Planetary Resources started this discussion and two years later we had this this momentous legal event. It was the culmination of thorough research and informative discussion between industry, government officials and the international community. The new US law is fully compliant with the OST and creates a stable foundation for a new industry. 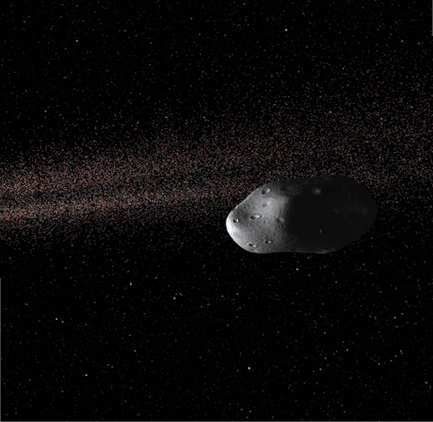 More than 13,000 asteroids considered near Earth have been studied with more discovered every year. These near-Earth asteroids represent a resource base that can transform humanity’s future.

The legislative milestone passed in the United States was just the beginning. In February, the Government of Luxembourg announced its intent to foster a space resource utilisation industry. Luxembourg announced in June that it would implement a law that recognised the right of private companies to own space resources. Much of the legal discussion now is about implementation and the proper frameworks for space resource utilisation. What had been a decades-old debate of ‘can we?’ has now turned into a discussion of ‘how do we?’

In multilateral settings, there are new discussions about other countries adopting similar laws. The reason for the adoption of these laws is clear. The United States and Luxembourg are leading the discussion and creating a fertile environment for their nations to reap the benefits from supporting companies that are generating new technologies, access to scarce resources, scientific discoveries, employment and new sources of taxable revenue.

Before Planetary Resources can extract materials from asteroids, it must first gather data on the asteroid’s composition and characteristics using a fleet of prospecting spacecraft.

The growing commercial space industry was not a product of abiogenesis. The industry was born and nurtured from decades of government investment and technological development. As the industry matured, it began to incorporate technologies from other industries to address market demands - something that most governments do not do.

Today, we enjoy the benefit of collaboration between the commercial and government space actors. For instance, the US Government shares its knowledge and experience and the commercial industry shares its innovations and provides new services. Together, governments and industry are advancing space capabilities at an unprecedented pace.

Some of the following innovations resulted from the space resources utilisation industry:

3D printing - in January, Planetary Resources unveiled the first 3D printed object made from asteroid metals sourced from meteorites. The exercise proved that metals on asteroids could be processed and printed into anything, a critically important technological development because human exploration of the Solar System will be most efficient when humans can use the resources found in space to build structures. The time, cost and complexity of launching every piece of hardware, plus spares, makes any long-duration human exploration impractical. Building materials in space from resources found on asteroids or the Moon removes these constraints.

Spacecraft manufacturing - government space agencies of the world develop and procure some of the most complex and precise instruments ever created by humans. These spacecraft have landed on Mars, comets and asteroids - and enabled humans to walk on the Moon. The scientific knowledge gained by these missions is profound.

Cost-effective - commercial space companies usually build a satellite that is cost-effective and designed for a small number of missions. In one sense the likes of Skybox, and Planet Labs and Planetary Resources are commoditising satellites. These new satellites are deployed in greater numbers and the risk to the mission is spread across several satellites rather than one satellite. To handle these larger constellations, the companies have developed new software capabilities, new sensors, and new manufacturing techniques.

Market expansion - commercial space companies are addressing needs in existing markets, like Earth observation, and also creating completely new markets like asteroid mining and global Internet access. While there are still differences between the goals of commercial and government space missions, there are areas of significant mutual interest and cooperation.

The civil space agencies of the world conduct activities in three general categories: exploration, planetary science, and Earth science. The newer commercial space companies are developing business in three categories as well: space tourism, Earth observation and space resources. The overlap is obvious and the opportunities for collaboration are equally obvious.

The Earth observation industry is on the cusp of providing views of the world that we have never seen before. The number of digital eyes in space is increasing dramatically and providing us with higher resolutions, real-time tracking, full-motion video and images that span much of the electromagnetic spectrum. Planetary Resources is taking its space resource technologies and turning its space telescopes to look at Earth. We will provide new types of information like infrared and hyperspectral data to farmers, forestry services, and support natural disaster monitoring and relief.

Planetary science seeks to know more about our Solar System and its origins. Space resource utilisation companies are developing satellites to go and analyse asteroids and the Moon. Much of what the resource companies currently know about asteroids and the Moon comes from data produced from government-funded planetary science missions. In the near future, space resource utilisation companies will produce their own data that will be of tremendous value to the scientific community. 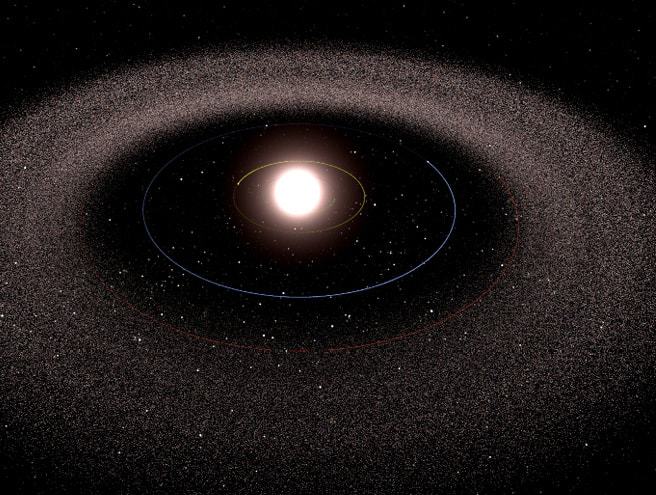 Over half of the near-Earth asteroids are easier to get to than the surface of the Moon.

The space resource utilisation industry will also directly support space exploration initiatives by providing the water, fuel, raw materials and radiation shielding needed for humans to explore deeper into the Solar System and for longer periods of time.

Let us return to asteroid 164121. It turns out that it will not threaten Earth during this approach, though it will come within nearly five million kilometres of our planet - a close approach in astronomical terms but not something to worry about. We know this because earlier this year the CSS was able to conduct another observation of the asteroid and the resulting data provided a clear picture of the asteroid’s orbit. CSS is now more capable than it has ever been.

Back in 2014, when NASA wanted to improve the ability to find and track asteroids such as 164121 it decided to collaborate on the task. 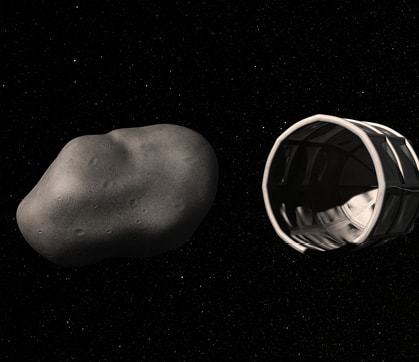 The actual method used for extracting materials from asteroids will depend on the composition of the asteroid. One possible concept involves utilising thermal energy from the Sun to volatilise water inside the asteroid.

This collaboration resulted in the development of an algorithm that improved current detection methods by 15 per cent. The cost was US $187,000 - roughly two per cent of the yearly budget that funds CSS and only 0.01 per cent of the total overall NEO detection programme. NASA benefited, Planetary Resources benefited, the science community benefited - and the brilliant software engineer who developed the algorithm won a sizable prize.

It is just one example of the growing and fruitful collaboration between the space resource utilisation industry and governments around the world. We are at an exciting point in history where our political leadership, the science community and industry are all working together to develop the capabilities and resources that will enhance the quality of life on Earth - and expand our permanent presence in the Solar System. 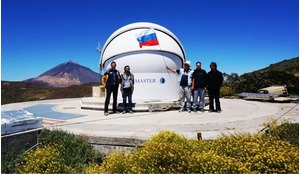 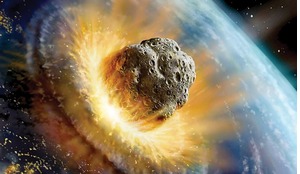 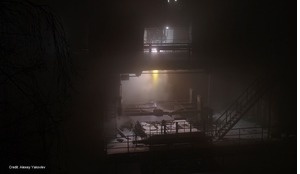