Cosmic communications and the anthropology of outer space

As space scientists and engineers search for intelligent extraterrestrial communications in the universe through building, making and tuning, hardware and software with which they might make contact, they engage in knowledge production that is essentially under the purview of anthropology - that is, the study of culture.

Using NASA’s Jet Propulsion Laboratory (JPL) website, a curious Earth-bound human can track the two Voyager spacecraft, launched 40 years ago, as the probes hurtle from the ‘heliosheath’ - a zone where the clutches of the solar winds loosen - into interstellar space.

Mounted on these craft are golden discs that contain ‘sounds and images selected to portray the diversity of life and culture on Earth’. Although unlikely, perhaps these far-flung vestiges of human cultural artefacts, from Beethoven’s Italian Quartet to one of the record designer’s brain waves, could be heard and interpreted by alien ‘ears’ aeons in the future.

The discs are imbued with the potential, if not the promise, for culture contact. As Voyagers 1 and 2 swing away from the Sun at over 35,000 mph, they act as connective webs to Earth-dwelling humans. Space morphs into a transductive medium for future-oriented cultural exchange. In this way, the records are not just messages to Others, but repositories for their human makers’ sensibilities. 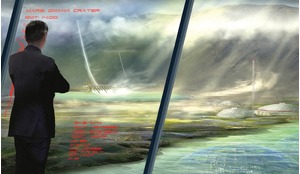