Three types of targets are on the flexible path for human exploration: the Moon, asteroids and eventually Mars. All these targets present evidence for the occurrence of water, either in the form of ground ice, water of hydration (in the structure of rocky materials), or in cold traps. Cold trapping of volatiles has now been confirmed even in the most extreme regions of the Solar System, like Mercury.

Water is a central preoccupation of human exploration planning and, in the longterm, for the human colonisation of the Solar System

Naturally they have been considered as bases for humans exploring the Martian system. Phobos in particular shows evidence for water signatures in spectroscopic observations. However, that object has always been observed as an opportunistic target and systematic mapping and mineralogical characterisation of the body are necessary to assess its actual potential for in situ resources.

Dedicated missions to Phobos have failed to date but the interest of the community for this object has led to the introduction of many different concepts over the past decade: sample return missions, high-resolution geophysical characterisation, surface landers, and geological and chemical mapping. It is expected that the next decade will see one of these missions move forward.

Beyond Mars, the main belt of asteroids is the next best place to search for water. Volatile-rich asteroids represent about 76 per cent of the mass of the main belt, or about 2x1021 kg, though the actual volume of water available in the main belt is unknown.

The Arda Valles region of Mars, comprising the network of drainage valleys seen in the left-hand portion of the image. The region lies on the western rim of an ancient large impact basin, which can be seen in the right-hand portion of the image. The region has been heavily influenced by the action of water. In addition to the drainage valleys, the crater to the right of centre was once filled by muddy sediments that later collapsed into the chaotic terrain seen in the crater floor. Zooming in to the left of this crater, just above the bottom central crater, reveals light-toned deposits that have been identified as clays, formed in the presence of water. The fractured terrain to the right of the scene is also linked to the loss of underground ice and evaporating water. The fractures are also likely linked to stresses in the surface materials due to the compaction of sediments deposited by water. The region was imaged by the High Resolution Stereo Camera on Mars Express on 20 July 2015.

At the core of this question is the abundance of volatile-rich planetesimals migrated from the outer Solar System (ie, beyond Jupiter). Observations of increasing abundance of C-type asteroids across the main belt inferred from telescopic observations have led to the long-time leading assumption that asteroids formed at their current locations. This raised a conundrum for the coexistence of the dry asteroid Vesta and the wet asteroid Ceres in the same neighbourhood.

Extended assay of the main belt thanks to extensive telescopic surveys performed over the past decade has led to the realisation that the significant mixing of dry and wet bodies across this region of the Solar System cannot be easily reconciled with the in situ formation scenario. This led to the introduction of new scenarios for the origin of volatile-rich objects in the asteroid main belt.

One of these models dubbed the ‘Grand Tack’ suggested that icy planetesimals migrated from the outer Solar System while dry asteroids migrated from within Earth’s orbit. The Grazier scenario suggested that volatiles coming from the reservoirs of planetesimals from the four growing giant planets migrated within the first five million years following the beginning of the Solar System and accreted with dry asteroids already in place in the asteroid belt.

In both scenarios we do not know the abundance of transported volatiles; it is difficult to constrain because follow-on migration events erased part of the evidence. The exploration of the Jupiter Trojan asteroids (located along Jupiter’s orbit, but organised in clouds leading and trailing Jupiter by 60 degrees) has the potential to answer this question. 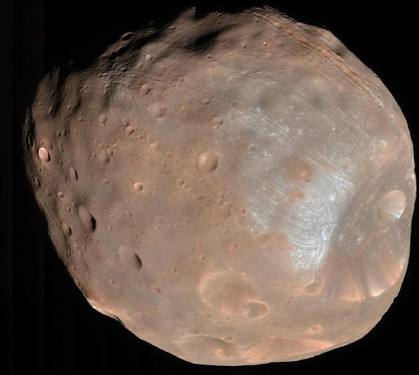 The Martian moon Phobos, taken with the HiRISE instrument aboard the Mars Reconnaissance Orbiter (MRO)

The Trojan clouds are located in gravity wells that captured about 800,000 objects. These represent the preserved witnesses of large-scale migration events and this region is so interesting to scientists that multiple teams in Europe, the United States and Japan are currently working on the development of concepts to explore that region.

NASA recently selected a mission concept under its Discovery programme for in-depth study that would perform multiple flybys of the Trojan population. NASA’s Planetary Decadal survey emphasised the importance of obtaining detailed chemical observations of these objects necessary to infer their origin(s). This implies the need to stay at least at one of them for extended exploration as some of the chemistry measurements important to planetary science require a long integration time. Hence, other missions under formulation include a rendezvous and even a lander. The Japanese space agency JAXA is even proposing an ambitious mission with a solar-sail spacecraft that would perform a sample return from one Trojan asteroid. 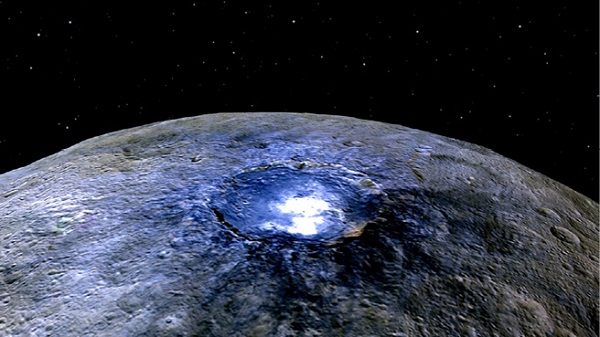 False colour image of the Occator crator on Ceres. The current favoured explanation for the bright spots is that they are made of salty ice, perhaps deposited when the impactor punched through the crust of Ceres into a salty ocean below 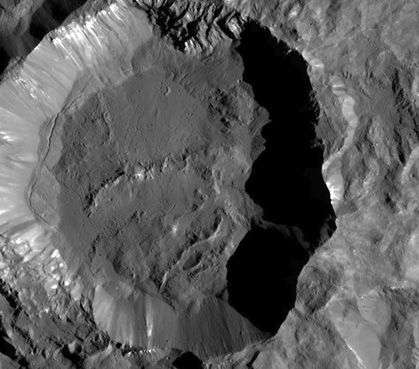 Image from NASA’s Dawn spacecraft of Kupalo crater, one of the youngest craters on Ceres. It has bright material exposed on its rim and walls, which could be salts. Its flat floor likely formed from impact melt and debris. Kupalo measures 16 miles (26 km) across and is located at southern mid-latitudes, and is named after the Slavic god of vegetation and harvest.

The Sun and Earth also share gravity wells. Earth’s leading and trailing Trojan regions are believed to have trapped a large number of planetesimals that travelled the Solar System early on. In 2010 the NEO-WISE telescope discovered one of these Earth’s Trojan asteroids (2010 TK7). These asteroids are interesting not only for origin science but also because they represent possible goldmines for in situ resources and potential real estate for human colonies. These regions remain to be charted, though, and their locations with respect to Earth and Sun make it difficult for observation with Earth-bound telescopes. A dedicated reconnaissance mission would help assess the nature of these regions prior to a more ambitious mission.

In the search for the origin of volatiles in the Solar System, the Dawn mission arrived at Ceres in March 2015 and has been pursuing geological and compositional mapping of its surface ever since. Dawn reached its lowest and final altitude mapping orbit in mid-December 2015. The density of this protoplanet, known since the 1980s, is intermediate between ice and rock. It suggests the presence of about 25 per cent of water by mass. 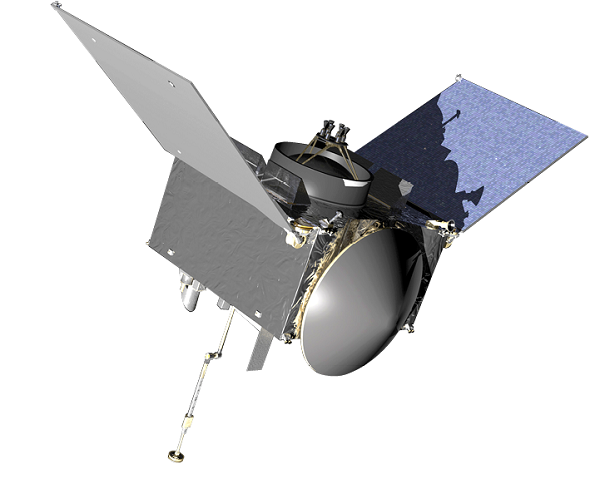 NASA’s Origins, Spectral Interpretation, Resource Identification, Security- Regolith Explorer (OSIRIS-REx) spacecraft will be the first US mission to collect a sample of an asteroid and return it to Earth for study. Launch is scheduled for September

The state of that water (‘free’ versus in the structure of silicates) is not known yet but the Dawn mission will address this question. In a December 2015 issue of the journal Nature, preliminary results suggested the presence of hydrated silicates on the surface of Ceres and, in particular, the presence of ammoniated clays (ie, clays with ammonium in their structure).

Another series of results suggest the presence of hydrated salts in the famous bright spots of the Occator crater. These observations suggest an abundance of water in Ceres readily accessible to future explorers. Other objects in the main belt also display water on their surface directly in the form of ice. This is the case of the largest representative of the Themis family that is the core of a larger body disrupted by a major impact. A patch of ice, estimated to be about a few hundred metres across, has been inferred from astronomical observations. This led to the speculation that water ice may be common in the outer main belt but is rarely observed because it is protected from rapid sublimation by an insulating regolith layer. And that ice can be excavated by small impacts, which are believed to happen with a frequency of about one thousand years.

Each tackled this question with the exploration of main belt comets. These objects were discovered about a decade ago and are generally associated with two asteroid families: Hygeia and Themis. Evidence for outgassing activity was found in the form of dust jets. Volatile-driven activity has been inferred from the dependence observed between the level of activity and the distance of these objects to the Sun as they evolve on an eccentric orbit. A mission to these objects could obtain critical information on the temperature at which ice formed, which would lead to a better understanding of the extent of volatile migration across the Solar System. 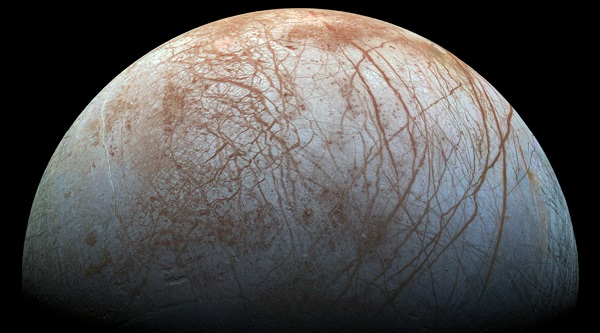 Diverse surface geology on Jovian moon Europa. Linear cracks and ridges crisscross the surface, interrupted by regions of disrupted terrain where the surface ice crust has been broken up and re-frozen into new patterns

It is also now understood that near-Earth objects are fragments of former asteroids ejected toward the inner Solar System as a result of resonances in the main belt. Hence, not only do these objects provide a playground for human colonisation but their exploration offers an opportunity for better understanding the origin and distribution of volatiles in the inner Solar system.

Reconnaissance observations for human exploration and origin science are at the core of three missions in development or recently launched. Following the successful Hayabusa mission, Hayabusa-2, launched in November 2014, will perform a sample return of a water-rich asteroid.

The OSIRIS-REx mission to be launched later in 2016 was selected under NASA’s New Frontiers programme. It will perform detailed characterisation as well as a sample return. The third mission, the Near Earth Asteroid Scout CubeSat is currently in development as part of NASA’s human exploration programme. It would reach a 10 m asteroid in the 2022 timeframe for detailed surface characterisation.

The vast resources in the inner Solar System will inevitably open the frontier of the outer Solar System. Looking toward the future, when Solar System-wide travel will be common, the volatile resources available there are incommensurable - from Saturn’s rings, to Enceladus and its geysers, from Europa’s ocean, to Titan hydrocarbon lakes. There, too, it’s all about the water. 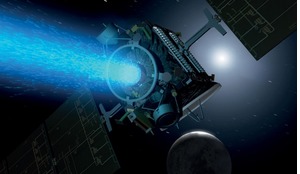 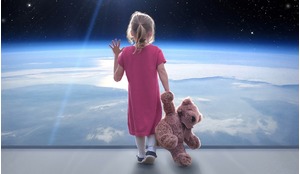 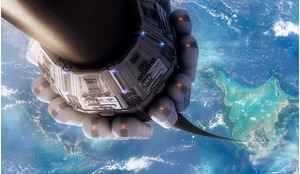