We all know that dealing with waste, rubbish and litter is a huge environmental concern on Earth but transfer the problem to the restricted confines of a long term space mission and it becomes an even bigger issue. Rigorous housekeeping to ensure crews remain safe and healthy on future deep space missions will be of paramount importance and one of the less glamorous challenges not often talked about is how to handle the large amounts of rubbish and waste that will be produced. NASA’s Orbital Syngas/Commodity Augmentation Reactor (OSCAR) is one project offering a way to design new and innovative technology for dealing with garbage in space.

When planet Earth sends humans into space, they are guaranteed to create waste. In fact, it is estimated that a crew of four on a one-year mission would generate around 2500 kg of rubbish, garbage, trash or waste, whatever term you prefer. The waste is either from natural, biological processes or from items on a spacecraft that are deemed no longer useful. Here on Earth, the recognised solution often involves recycling in one form or another, but how can this philosophy be extended to space?

For NASA, the answer lies in its Logistics Reduction Program (LRP), which seeks to use all items sent into space in as many reusable scenarios as possible. Currently, waste generated during a mission such as on the International Space Station (ISS) is either carried on board the spacecraft during the mission or stored inside a logistics module, such as a Cygnus or Progress transport capsule, which are de-orbited into Earth’s atmosphere for destruction.

The LRP, by contrast, is in line with the vision of NASA’s In-Situ Resource Utilisation (ISRU) campaign, which follows the philosophy of using as much of the surrounding resources as possible to generate useful commodities for a space mission and minimise mass that has to be launched from the gravitational well of Earth. 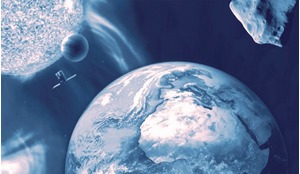