An international science team, using NASA's Kepler space telescope, have captured what astronomers call the "shock breakout" of a supernova – the brilliant flash of an exploding star's shock wave – for the first time in visible light wavelengths.

Catching a supernova shock wave as it reached the surface of a star is a non-trivial task, because the shock breakout only lasts about 20 minutes. Nonetheless, this impressive detection was made possible by the team, who analysed light captured by Kepler every 30 minutes over a three-year period, searching some 50 trillion stars spread across 500 distant galaxies.

"To put their size into perspective, Earth's orbit about our sun would fit comfortably within these colossal stars," said Peter Garnavich, an astrophysics professor at the University of Notre Dame in Indiana who led the analysis efforts.

These types of supernovae are known as Type II supernovae and occur when a massive star runs out of nuclear fuel causing its core to collapse as gravity takes over. While capturing images of this nature is incredibly difficult, it does help researchers understand the event's root cause and in this case the two supernovae matched up well with mathematical models of Type II explosions, thus reinforcing some existing theories.

"It is a thrill to be a part of theoretical predictions becoming an observed and tested phenomenon. We now have more than just theory to explain what happens when a supernova shock wave reaches the surface of a star as that star is totally torn apart,” said Edward Shaya, an associate research scientist in astronomy at UMD and a co-author on the study. 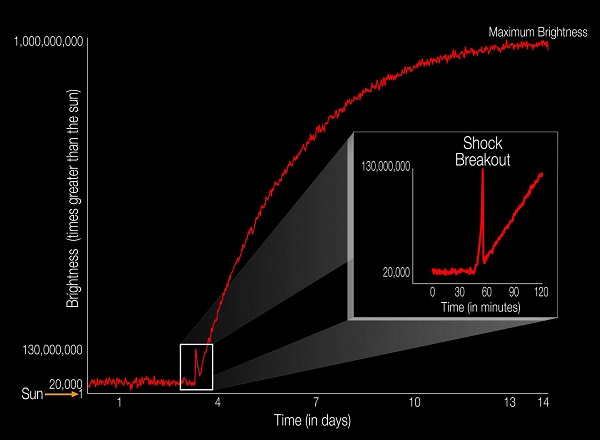 When a type II supernova occurs, it may shine with the brightness of 1 billion suns and for a short time, this causes the sudden appearance of a 'new' bright star, before slowly fading from sight over several weeks or months. However the maximum intensity of a supernova explosion occurs after the shock wave and it is this period of peak brightness that is normally studied by astronomers. Therefore, capturing such an extreme catastrophic event, whereby stellar material is expelled away from the star at velocities up to 30,000 km/s or 10% of the speed of light is of great importance astronomically. "Like police getting surveillance footage of a crime after the event, we can study brightness histories from Kepler to find out what was happening in the exact hour that the shock wave from the stellar core reached the surface of the star," continued Shaya. "These events are bright enough that they change the brightness of the whole galaxy by a measurable amount."

Analysis of the data from the supernovae also revealed that while both explosions were cataclysmic, no shock breakout was seen in the smaller of the two supergiants. This could be due to the smaller star being surrounded by gas, masking the shock wave when it reached the star's surface. "That is the puzzle of these results," said Garnavich. "You look at two supernovae and see two different things. That's maximum diversity."

In addition to helping confirm the mechanisms involved in these explosive but rare events, supernovae also play a significant role in enriching the interstellar medium with higher mass elements such as iron. Observations such as these can thus allows researchers to better understand how the seeds of chemical complexity and life itself have been scattered in space and time in our Milky Way galaxy. "All heavy elements in the universe come from supernova explosions. For example, all the silver, nickel, and copper in the earth and even in our bodies came from the explosive death throes of stars," said Steve Howell, project scientist for NASA's Kepler and K2 missions at NASA's Ames Research Center in California's Silicon Valley. "Life exists because of supernovae."