In preparation for its launch on Monday 14th March, the ExoMars Schiaparelli module, along with the Trace Gas Orbiter (TGO), were transported by train to the Baikonur cosmosdrome where they were paired with the Proton launch vehicle that will carry the spacecraft on its mission to Mars.

ExoMars 2016 is one part of ESA’s robotic mission to hunt for signs of life on the Red Planet. Two missions are expected within the ExoMars programme; one consisting of an Orbiter plus an Entry, Descent and Landing Demonstrator Module, known as the Schiaparelli module, is to be launched next week and the other is planned with a launch date of 2018. This latter mission includes a rover that will carry a drill and a suite of instruments dedicated to exobiology and geochemistry research. Both missions will be carried out in cooperation with Roscosmos, who are providing the proton rockets.

The main objectives of the 2016 mission are to search for evidence of methane and other trace atmospheric gases that could be signatures of active biological or geological processes that are possibly still occurring on the Red Planet. These mission objectives will be carried out with the TGO, while Schiaparelli will contain sensors to evaluate the lander’s performance as it descends, and additional sensors to study the environment at the landing site.

Due to the position of Earth relative to Mars, the journey to our closest planetary neighbour should be limited to about 7 months, with the pair arriving at Mars in October. Three days before reaching the atmosphere of Mars, Schiaparelli will be ejected from the Orbiter towards the Red Planet, where it will coast towards its destination during which phase it will remain in hibernation mode in order to reduce its power consumption. Schiaparelli will be activated a few hours before entering the atmosphere of Mars where it will descend into the Martian atmosphere at 21 000 km/h. 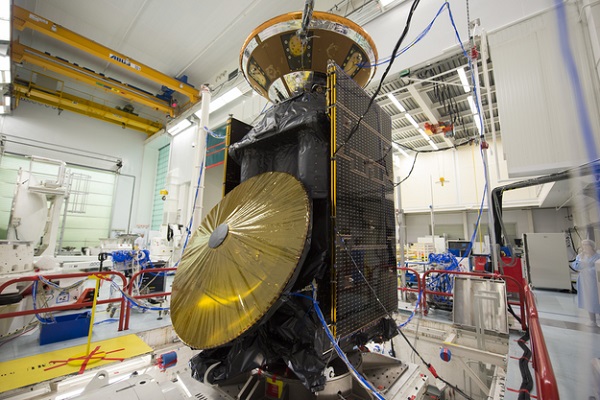 A key element for accessing the surface of Mars and one of the greatest challenges in space exploration is the successful execution of the entry, descent and landing sequence. It is hoped that Schiaparelli will not succumb to the same fate of many previous ill-fated missions to Mars by performing a controlled landing on the planet’s surface. Schiaparelli is thus designed to be slowed down by aerobraking and the deployment of a parachute at an altitude of about 11 km. A thruster system will also slow its descent and as Schiaparelli lands, the final shock will be cushioned by a crushable structure built into the module. Schiaparelli will arrive at Mars during the global dust storm season, which means that it may encounter a highly dust-loaded atmosphere.

Meanwhile, the TGO will be placed initially into an elliptical orbit around Mars, before settling into a circular, 400-km altitude orbit in order to conduct its scientific mission. Powered by solar wings, the orbiter is also equipped with 2 lithium-ion batteries that will be used to cover eclipses. An electrical test of the Trace Gas Orbiter has already been carried out by Thales Alenia Space Italia to replicate the same configuration that will be on the launch pad.