Enormous gas cloud on a collision course with the Milky Way

An immense cloud of hydrogen gas, suggested to have launched from the outer regions of the galactic disk around 70 million years ago, is on a return collision course and plummeting toward our galaxy at nearly 700,000 miles per hour. Luckily, it will be at least 30 million years or so before the cloud is expected to plough into the Milky Way's disk, however when it does astronomers believe it will ignite a spectacular burst of star formation, perhaps providing enough gas to make 2 million suns.

Discovered in the early 1960s by doctoral astronomy student Gail Smith, the aptly named Smith Cloud was first detected by radio waves emitted by the changing energy states of neutral hydrogen atoms in the cloud. The gaseous halo of the Milky Way is home to a diverse population of highvelocity clouds (HVCs) that do not co-rotate with the underlying disk and this particular cloud has been measured to be 11,000 light-years long and 2,500 light-years across. If the cloud could be seen in visible light, it would span the sky with an apparent diameter 30 times greater than the size of the full moon. 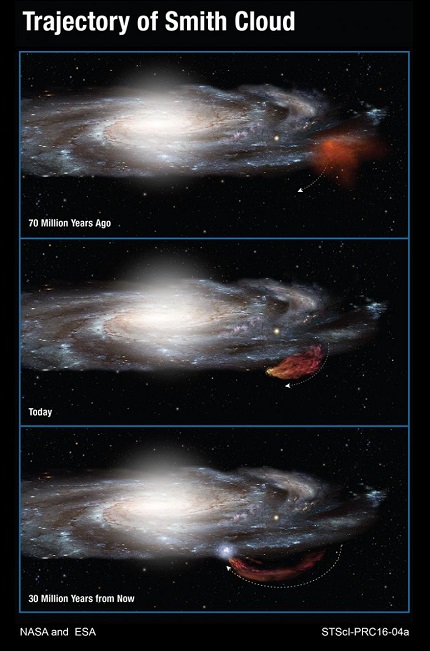 This diagram shows the 100-million-year-long trajectory of the Smith Cloud as it arcs out of the plane of our Milky Way galaxy and following a ballistic path, the cloud will fall back into the disk and trigger new star formation 30 million years from now. Image credit: NASA/ESA/A. Feild (STScI)

"The cloud is an example of how the galaxy is changing with time," explained team leader Andrew Fox of the Space Telescope Science Institute in Baltimore, Maryland. "It's telling us that the Milky Way is a bubbling, very active place where gas can be thrown out of one part of the disk and then return back down into another. Hubble's measurements of the Smith Cloud are helping us to visualize how active the disks of galaxies are," continues Fox.

Although the orbit for the Smith Cloud is well-determined, it has long been thought that the cloud might be some starless galaxy or gas falling into the Milky Way from intergalactic space. If this suggestion is correct, then the cloud composition would be mainly light elements such as hydrogen and helium and not heavier ones made by stars. To test this hypothesis, the team used Hubble to determine for the first time the amount of heavier elements relative to hydrogen in the Smith Cloud, by measuring the dip in brightness of three active galaxies that reside billions of light-years beyond the cloud. The Smith Cloud absorbs some of its light in a very small wavelength range (the ultraviolet), and by using Hubble's Cosmic Origins Spectrograph to measure this shortfall in radiation, the chemical makeup of the cloud can be estimated. 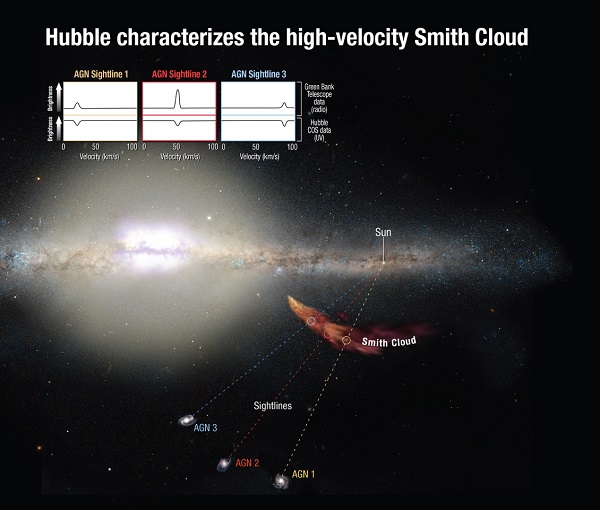 Hubble's Cosmic Origins Spectrograph can measure how the light from distant background objects is affected as it passes through the cloud, yielding clues to the chemical composition of the cloud. Combined ultraviolet and radio observations correlate to the cloud's infall velocities, providing solid evidence that the spectral features link to the cloud's dynamics. Image credit: NASA/ESA/A. Feild (STScI)

In this instance, the team looked specifically for absorption from sulphur, that can absorb ultraviolet light and is also a good gauge of how many heavier elements reside in the cloud. "By measuring sulphur, you can learn how enriched in sulphur atoms the cloud is compared to the Sun," said Fox. Fox and his team then compared Hubble's sulphur measurements to hydrogen measurements made by the Green Bank Telescope (GBT) and found that the Smith Cloud is as rich in sulphur as the Milky Way's outer disk, a region about 40,000 light-years from the galaxy's centre (about 15,000 light-years farther out than our sun and solar system).

This suggests that the Smith Cloud was enriched by material from stars and is therefore not a pristine hydrogen cloud from outside the galaxy. Instead, the cloud appears to have been ejected from within the Milky Way and is now heading back to rendezvous with its former host. "We have found several massive gas clouds in the Milky Way halo that may serve as future fuel for star formation in its disk, but, for most of them, their origins remain a mystery. The Smith Cloud is certainly one of the best examples that shows that recycled gas is an important mechanism in the evolution of galaxies," says team member Nicolas Lehner from the University of Notre Dame. Now that the mystery of the Smith Cloud's origin has been settled, the next important question to solve will be how did the cloud get to where it is now and what calamitous event could have catapulted it from the Milky Way's disk in the first place? The answers may be found in future research.