On January 17, a SpaceX Falcon 9 rocket successfully launched an ocean science satellite, although due to a landing leg breaking in a hard landing, the attempt to land the rocket booster on the drone ship has apparently failed.

The primary mission of the Jason-3 satellite is to continue an unbroken record of more than two decades of sea level measurements from orbit.

A SpaceX spokesman said on the company’s webcast of the launch a short time later that the first stage was on target to land on the ship, but came in too hard. “It looks like one of the landing legs may have broken as we touched down on the droneship,” he said. “Unfortunately we are not standing upright on the droneship at the moment.” Elon Musk, SpaceX founder and CEO later tweeted that it was “definitely harder to land on a ship. ...A leg lockout didn't latch, so it tipped over after the landing.”

As the current El Nino in the eastern Pacific has strengthened, Jason-3 has been stuck on the ground. Jason-3’s launch was originally scheduled for August 2015 aboard a SpaceX Falcon 9 rocket. However, the launch was postponed after a different Falcon 9 rocket failed during a supply mission to the International Space Station in June. After correcting the problem, a successful launch last month restored Falcon 9 to flight status. 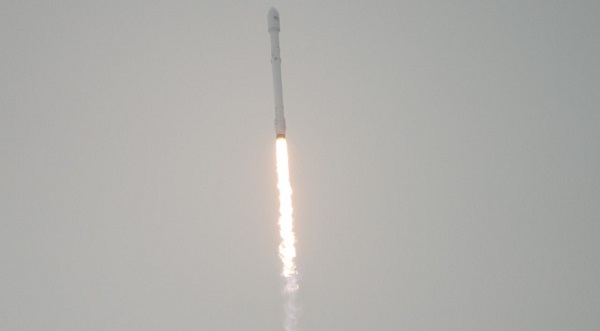 The launch was also the first SpaceX launch under NASA’s Launch Services Program (LSP), which contracts for the launch of NASA-sponsored spacecraft separately from the agency’s commercial cargo and crew programs.

Jason-3 is the latest in a series of ocean monitoring satellites dating back more than two decades. The mission is a joint venture of several agencies in the U.S. and Europe, including NASA, the National Oceanic and Atmospheric Administration, the French space agency CNES and European weather satellite operator Eumetsat.

The 510-kilogram satellite will be placed into a near-polar orbit, ultimately at an altitude of 1,336 kilometers, the same orbit as that used by the current Jason-2 spacecraft. Jason-3 will work in conjunction with Jason-2 for at least six months to calibrate data from the new spacecraft’s instruments.

Jason-3 is designed to continue the collection of data on ocean surface conditions that play an essential role in both weather forecasting and climate monitoring. “Jason information is incredibly useful, especially to NOAA, because it allows us to not only track the sea level change that is impacting our coastal features right now, but also to help forecast extreme weather,” said Laury Miller, Jason-3 program scientist at NOAA, during a pre-launch press conference January 15.

Hans Koenigsmann, vice president of mission assurance for Space-X, said the rocket used in Sunday’s launch would have been able to return to land but the company does not yet have environmental approval at Vandenberg.