X-Ray binaries are comprised of a black hole or neutron star that feeds off a stellar companion and these energetic objects are thought to play a crucial role in heating the intergalactic gas that was home to the very first galaxies that formed. "We have come to realize in the past few years that it is likely the lower-mass remnants of normal stellar evolution, the black holes and neutron stars, may play a crucial role in heating of the intergalactic gas at very early times in the universe, around the cosmic dawn," said Ann Hornschemeier of NASA Goddard, the principal investigator of the NuSTAR Andromeda studies.

Andromeda, also known as M31, is a spiral galaxy like our own, but is slightly larger in size and at ‘only’ 2.5 million light-years away it is often thought of as the big sister (or brother) to our own Milky Way galaxy. Due to its relatively close proximity, it can even be seen by the naked eye in dark, clear skies.

"Andromeda is the only large spiral galaxy where we can see individual X-ray binaries and study them in detail in an environment like our own," said Daniel Wik of NASA Goddard Space Flight Center in Greenbelt, Maryland, who presented the results at the 227th meeting of American Astronomical Society in Kissimmee, Florida. "We can then use this information to deduce what's going on in more distant galaxies, which are harder to see."

X-ray binaries are formed when a star much larger than our Sun explodes cataclysmically at the end if its life, producing either a black hole or a neutron star depending on the initial properties, mostly its mass, of the original giant star. The increased gravity from the newly formed black hole or neutron star can then capture material from a nearby stellar companion and as the material falls in, it is heated to extremely high temperatures, releasing a huge amount of X-rays in the process. 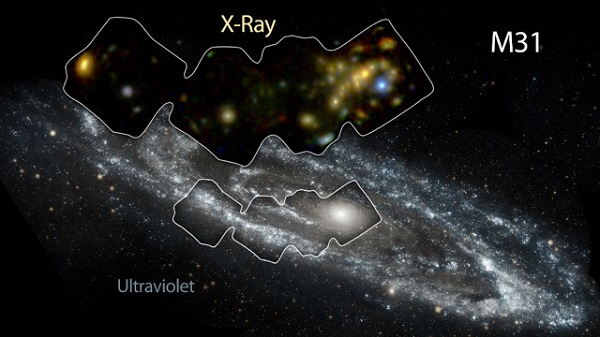 The Andromeda Galaxy in ultraviolet light taken by NASA's Galaxy Evolution Explorer and the swath of sky captured by NuSTAR. Image credit: NASA/JPL-Caltech/GSFC

With NuSTAR's new view of a large area of Andromeda, Wik and colleagues are aiming to distinguish what fraction of X-ray binaries are black holes or neutron stars in order to understand the population as a whole. It will also allow astronomers to figure out just how much power is coming out from these systems. The new research also reveals how Andromeda may differ from our Milky Way. “Studying the extreme stellar populations in Andromeda tells us about how its history of forming stars may be different than in our neighborhood,” adds Fiona Harrison, the principal investigator of the NuSTAR mission.

Working in tandem with other space missions, such as NASA's Chandra X-ray Observatory, that detects objects with lower X-ray energies than those detected by NuSTAR, will provide astronomers with a powerful tool for constraining the nature of X-ray binaries in spiral galaxies.