ISS Crew have undocked and are heading for Earth

After nearly 143 days spent in space, for three crew members aboard the International Space Station (ISS) the journey will soon be over. Expedition 45 Flight Engineers Kjell Lindgren of NASA, Oleg Kononenko of Roscosmos (Russian Federal Space Agency) and Kimiya Yui of the Japan Aerospace Exploration Agency (JAXA) will land in their Soyuz spacecraft, northeast of Dzhezkazgan, Kazakhstan at 8.12 am EST. NASA Television will air live coverage of the Soyuz TMA-17M deorbit burn and landing beginning at 7 am EST.

Waiting for the new crew members will be the team from Expedition 46, namely, Commander Scott Kelly of NASA, Mikhail Kornienko and Sergey Volkov of Roscosmos who will continue to operate the station in their absence. Kelly and Kornienko were originally members of Expedition 44 and have remained aboard the space station in a joint U.S - Russian year long mission in preparation for activities linked with NASA’s journey to Mars.

During this milestone, the two crew members are undergoing five behavioural health investigations to examine cognitive performance, brain structure, sleep, emotion and fatigue. Spaceflight can take its toll on astronauts, no matter how long they're away from Earth. Crew members have to regularly deal with experiences such as unnatural light, flying and falling at the same time, and performing everyday tasks that suddenly become inexplicably difficult. And of course, like anyone whose job involves travel, you only get to see your family and friends from a distance (in this case, a very very long distance away).

With less than a week to go, those who will be replacing the crew of Expedition 45, will be NASA astronaut Tim Copra, Russian cosmonaut Yuri Malenchenko and Tim Peake of ESA (European Space Agency), who are scheduled to launch from Baikonur, Kazakhstan, on 6th December and due to arrive at the station around 6 hours later. Peake, who will make history when he becomes the first Briton to serve a mission on board the space station, is due to spend six months carrying out maintenance on the station alongside, along with conducting around 30 scientific experiments.

This will include growing protein crystals, melting metal alloys in a weightless environment and measuring the effects of brain pressure whilst being in space. Being weightless can cause fluid in the body to move, mostly towards the head, this subsequently causes an increase in brain pressure, that could have ramifications for an astronauts' eyesight. 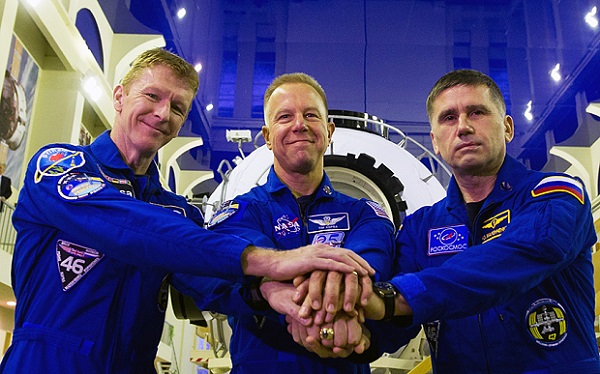 Peake will also run the London Marathon at the same time as runners hit the capital's streets on 24 April 2016, but he will be joining in from space. Apart from a difference in locality, Peake will run 26.2 miles strapped to a treadmill so that he can run on the spot without fear of floating away.