New light shed on the mystery of 'Born Again' stars

Reinvigorating one’s self to appear younger than you really are, is a desire many would pay good money for. Some stars however, known as ‘blue stragglers’ have been perfecting this process with such distinction, that is has taken over fifty years for astronomers to agree on what is making these stars appear more youthful than they actually are. Now though, this mystery has hopefully been resolved by a team of astronomers led by Natalie Gosnell, at the University of Texas, who have used the Hubble Space Telescope to ascertain why “blue stragglers” look hotter and bluer than they really should.

The leading theory on why these objects have an odd appearance, was that material from an ageing star is accreted onto a smaller companion, stripping the main star of its gas and dust, thus leaving behind a burned out white dwarf. Meanwhile its once small neighbour, now burdened with extra mass becomes hotter and bluer giving it a more youthful appearance. The colour of a star is defined by its temperature: the hottest ones, with a spectral classification of O and B appear blue, while cool stars are red. Hot, blue stars are considered the rock stars of the stellar world as their massive, luminous nature means they live fast and die young. Consequently studying such objects can prove difficult due to their limited lifespan. 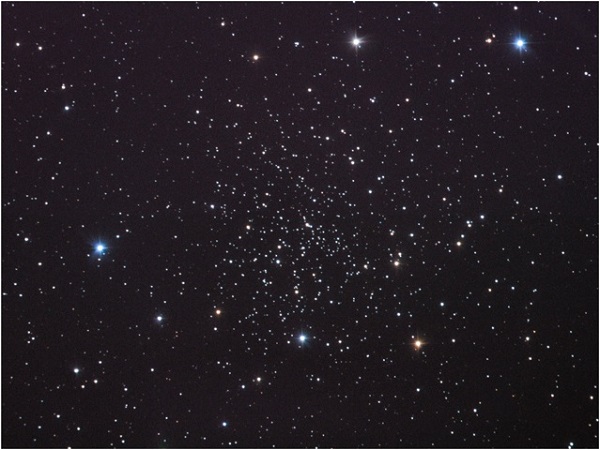 To test the theory of mass transfer onto a smaller companion, Gosnell and her team conducted a survey of an open star cluster NGC 188 that contained 21 blue stragglers. Using Hubble to identify the ultraviolet glow of a white dwarf, the team found that seven stragglers fitted the companion scenario. Better still, a further seven of the remaining 14 stragglers showed evidence for a transfer of mass between stars in other ways. “This was really great,” says Gosnell. “Until now there was no concrete observational proof, only suggestive results. It is the first time we can place limits on the fraction of blue stragglers formed through mass transfer.”

The study has been made possible because astronomers are now able to make a complete and accurate census of stars in a number of open star clusters, and given that stars in a cluster form at the same time and from the same materials, open clusters are the best laboratory for the study of stellar evolution. Nonetheless, only white dwarfs formed in the last 250 million years are detectable using this method. Cool white dwarfs that don’t emit UV light are harder to find using Hubble.

Blue stragglers are the most prominent bright objects in the colour-magnitude diagram of a star cluster and they stand out because old stellar populations are expected to be devoid of blue highmass stars. Finding out why some stars that were expected to become red giants, stars like Aldebaran for example, but instead manifested as a blue straggler, is therefore important for testing models of stellar evolution.

Other theories have also been postulated for the formation of blue stragglers and these include the merger of two of the stars in a triple star system or a collision between stars in the cluster (with debris coalescing to form a blue straggler). The discovery that mass-transfer between two stars in a binary pair is likely responsible for how blue stragglers form accounts for around 25 percent of evolved stars - a substantial number not to be sniffed at.