In recognition of her work in space weather research, Russian mathematician and research scientist Tatiana Podladchikova, was presented with the International Alexander Chizhevsky Medal for Space Weather and Space Climate, as part of the 12th European Space Weather Week which opened in Belgium this week.

Space weather forecasts are an integral part in planning space missions, not only that but with more than a thousand operational satellites currently orbiting Earth, each of them is prone to severe disturbances resulting from seemingly erratic space weather. Accordingly, such forecasts can provide integral information in predicting if space-bourne equipment is likely to malfunction due to conditions such as solar storms.

Dr. Podladchikova’s research aims to tackle these problems and provide answers to the challenges and threats that space weather imposes by studying phenomena that can impact space and terrestrial technological systems. "We seek to understand the essence of the phenomena that we observe in space because they are intricately connected with our plans on Earth," said Dr. Podladchikova.

Space weather research is not limited to the effects it has on our own planet however. Researchers also study planetary space weather and the impacts it may have in Solar System exploration for example. Nonetheless, Dr. Podladchikova aims to provide a greater understanding of issues that affect our near-space environment. Her work has included developing a method with Skoltech professor Yuri Shprits that allows a tracker device to provide up-to-date information on the current state of the radiation belts in the Earth’s magnetosphere and hence predict its evolution to safeguard satellites from a bombardment of high-energy particles. The team are also hoping to utilise this new method and create an online service where the current state of the magnetosphere can be monitored in real time. Researchers believe the new method might also be used for weather forecasting and the dynamics of the oceans.

The Chizhevsky Medal was set up to commemorate the pioneering Soviet scientist Alexander Chizhevsky, the founder of Heliobiology, which is the study of links between the Sun and the Earth and is issued to recipients who have provided major contributions to space weather research and/or services. 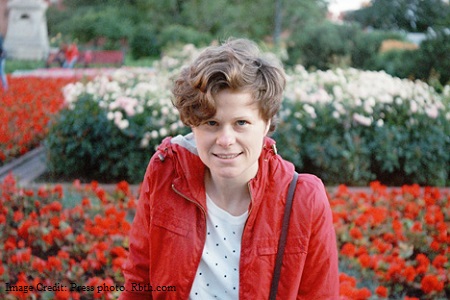 Part of Dr Podladchikova's research is to help develop a method to forecast geomagnetic storms.