Russia plans to stay part of the International Space Station partnership until 2024, then undock its modules to create a standalone base in orbit, the Russian space agency announced Tuesday.

A statement posted to the Russian space agency’s website said a meeting of the Roscosmos science and technical council considered Russia’s future human spaceflight plans, favoring the continued use of the International Space Station until 2024.

Then Russia plans to remove its modules from the International Space Station to form an all-Russian complex in orbit.

The statement said “a configuration of a multi-purpose laboratory module, a (docking) node module, and a scientific power module creates a promising Russian space station to meet the challenges of providing secure access to space (for Russia).”

Russia’s participation in the space station program beyond 2020 has been in doubt since government officials said they were reviewing whether to drop out of the global partnership in the wake of Western sanctions against Russia, which were prompted by the country’s annexation of Crimea in March 2014.

Russian officials are still finalizing other objectives for its space program from 2016 to 2025 as Russian industry begins consolidating into a government-owned enterprise, a move the country’s leadership says will raise worker wages and improve reliability.

Western sanctions against Russia erected hurdles in the path of what was expected to be a smooth decision in favor of extending the country’s use of the 450-ton orbital laboratory, according to Alexei Krasnov, head of human spaceflight programs at Roscosmos.

Krasnov told reporters in July that Roscosmos submitted a proposal in early 2014 matching NASA’s decision to extend support of the International Space Station from 2020 to 2024. But he said the outcome of the deliberations would be tinted by developments in Ukraine and the U.S. response to the conflict there.

The Obama administration announced in January 2014 it backed keeping the International Space Station operating until at least 2024, with the possibility to extend its mission to 2028, the 30-year anniversary of the launch of the outpost’s first module.

The Roscosmos science and technology council’s approval sets Russia’s human spaceflight plans until 2025, and another meeting in March will evaluate options for heavy-lift launchers and deep space exploration, said Yuri Koptev, the council’s chairman and a former head of the Russian space agency.

Russia’s space program — as described in the Roscosmos press release — will include a series of robotic missions to lunar orbit and the surface of the moon in the 2020s in preparation for a visit by cosmonauts in the 2030s.

The statement offered no details on the Russian moon mission. 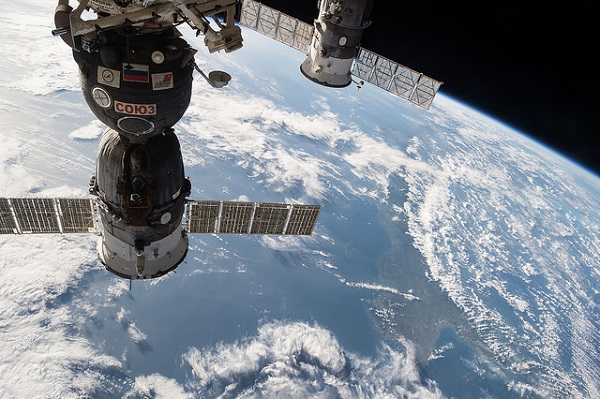 The laboratory module, docking system and scientific power platform Russia intends to use for its follow-on space station are set for launch to the ISS over the next few years after lengthy delays due to funding woes and technical problems.

The statement did not discuss the fate of the oldest Russian components of the International Space Station — the Zvezda service module, the Zarya storage compartment, and smaller docking ports. Most of the older Russian modules will have spent more than 20 years in orbit by 2024, well beyond their original design lifetimes.

Russia currently ferries crews between Earth and the space station, but U.S. commercial capsules are scheduled to begin flying astronauts to the outpost by the end of 2017, ending NASA’s reliance on the Soyuz spacecraft.

Russia will still have responsibility for maintaining the space station’s orbit and steering the complex away from space junk.

The Boeing CST-100 and SpaceX Crew Dragon spacecraft could do limited reboosts of the lab’s altitude, if required, but only the Russian Progress logistics freighter has the power to de-orbit the space station at the end of its lifetime.

The International Space Station’s other partners have not formally signed on for participation in the program after 2020.

The European Space Agency plans to put forward a proposal for more space station funding from European member states at their next high-level budget meeting in 2016, and the head of the Canadian Space Agency said last year Canada would evaluate the value of continuing its contribution to the program before deciding what to do.

Naoki Okumura, president of the Japan Aerospace Exploration Agency, said in October that Japan would decide by 2016 whether to commit to more years of space station operations.

For all the space station partners — but particularly ESA and JAXA — finding money to pay for the program after 2020 may depend on cutting the cost of operating the complex.