One of the most profound questions that cosmologists have been eager to answer since we understood our place in the cosmos, is how did it all begin and was there anything before our known Universe? Now however, scientists from The University of Texas at Dallas and their colleagues may be able to solve perhaps the biggest question of all time by suggesting a novel way in which to probe the beginning of space and time, potentially revealing secrets about the conditions that gave rise to the universe.

Currently the big bang hypothesis is perhaps the leading contender to explain the birth of the Universe. This theory postulates that the Universe went through an exponential expansion in the first fleeting fraction of a second of its existence – a process known as inflation. Inflation explains that quantum fluctuations in the inflationary period (thought to have happened about 10-35 seconds after the creation of the Universe) provided the ‘seeds’ in which matter began to clump together to form the galaxies and other observed large-scale structures that we see today.

Aiding the Inflation hypothesis is the tiny fluctuations in temperature in the otherwise smooth cosmic microwave background (CMB), which is the heat left over from the explosion of the big bang. Using probes such as the Cosmic Background Explorer (COBE) and Planck, researchers have already confirmed almost exactly the amount of variation in the CMB that is predicted by Inflation. Many physicists also believe that inflation explains why the Universe appears to be the same in all directions I.e. It is isotropic in every direction that you look and also why the Universe is flat. But did the Big Bang spring out of nothing or did it follow a Big Crunch? The Big Crunch theory states that a Universe that preceded our own, contracted to a state of extremely high density and temperature – a hypothetical opposite of the big bang – which, after it collapsed created another Universe starting with another big bang.

"Several different scenarios have been proposed for the origin of the big bang and to explain its preexisting, initial conditions, here we are proposing a new approach that could allow us to directly reveal the evolutionary history of the primordial universe from astrophysical signals” said Dr. Xingang Chen, assistant professor of physics at UT Dallas and a visiting scholar at the Harvard- Smithsonian Center for Astrophysics. "Each scenario can have many details in its theoretical models that result in various astrophysical signals that can be observed today," explained Dr. Yi Wang of the Hong Kong University of Science and Technology and fellow author of a paper recently submitted to the Journal of Cosmology and Astroparticle Physics. "Most of these signals may be shared by the different scenarios, but there are some signals that are unique fingerprints of each scenario.” 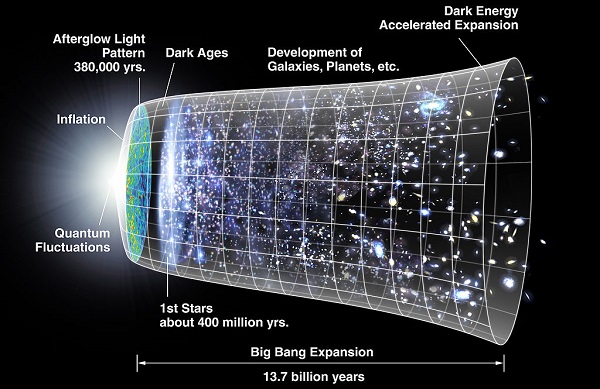 Timeline of the metric expansion of space, where space (including hypothetical non-observable portions of the universe) is represented at each time by the circular sections.

Although the quantum fluctuations of inflation can be mapped to provide spatial variations of the primordial universe, the one thing not fully determined is a ‘time stamp’ of these events. This new research by Chen and his colleagues however suggests that such "clocks" exist, and that they can be used to measure the passage of time at the universe's birth. These clocks, named the "primordial standard clocks" take the form of heavy particles, that behave like a pendulum, oscillating back and forth. Consequently, these oscillations or quantum wiggles appear as fine oscillatory structures that would manifest in measurements of the cosmic microwave background and luckily each primordial universe scenario predicts a unique signal pattern.

The existence of these clocks are already known to scientists, however it was previously understood that classically the particles needed some kind of push to make them oscillate, but the features or fingerprints they produce are not so easy to observe. Chen and his team are suggesting that the heavy particles can move quantum-mechanically without having to be pushed initially and are encoded in density perturbations as shape-dependent oscillatory features making them easier to identify.

"The information we currently have is akin to showing an audience many still pictures from a movie stacked on top of each other, but they lack proper time labelling for the correct sequence," said Chen. "With the help of these time labels, we can turn the stacks of stills into a coherent movie and directly reveal the evolutionary history of the primordial universe," continued Chen. "This should allow us to distinguish an inflationary universe from other scenarios, including one that previously contracted."

If the oscillations from the heavy particles are strong enough, current experiments should find them in the next decade, negating the need to design new instruments. It is also suggested that supporting evidence such as maps of the large-scale structure of the universe, including galaxies and cosmic hydrogen, could also be acquired from other lines of investigation. And since the primordial standard clocks would be a component of the "theory of everything," finding them would also provide evidence for physics beyond the Standard Model at an energy scale inaccessible to colliders on the ground.