Aladin gets ready for Aeolus

One of the trickiest pieces of space technology ever developed, that has been years in the making, is at last ready to join its host satellite for launch by the end of next year.

Aladin, is a state-of-the-art wind lidar that will fire lasers at air molecules and aerosols such as small particles of dust, ice and droplets of water in Earth’s atmosphere to provide a global picture of Earth’s winds. The data will not only be used to advance our knowledge of atmospheric dynamics, but will also contribute to climate research.

Designed by Airbus Defence and Space in France, along with its two powerful lasers, Aladin incorporates a large telescope and very sensitive receivers that will capture the slight change in frequency of backscattered light, caused by the movement of air molecules and aerosols. By comparing these frequencies with the original laser, the winds below the satellite can be determined.

Aladin will be housed on ESA’s Aeolus satellite – the first satellite to probe the wind on a global scale and one which will deliver measurements almost in real time, thus providing much-needed information to help improve weather forecasts.

“The Aeolus mission will provide wind observations that are unique with respect to the current global observing system capabilities. The observations fill a gap in the global observing system and despite the many years of delay there is still a need for the mission and we expect it to have a big impact on weather forecasting,” said Professor Erland Källén, Director of Research at the European Centre for Medium Range Weather Forecasts.

“In the Tropics, wind information dominates atmospheric analyses and this influences the quality of weather forecasts for Europe for the week ahead. Wind information from Aeolus is also expected to be important over oceans in both hemispheres for determining the position and evolution of jet streams and atmospheric fronts,” explained Källén. 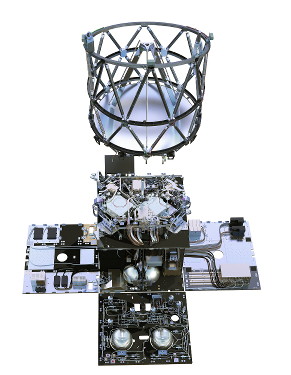 Aeolus has had to overcome a number of technical problems and challenges to get to its current stage in development, including issues associated with getting lasers to work properly in a vacuum and creating novel optics that could survive exposure to high-intensity laser pulses in the extreme environment of space, for at least a three year period – a process that has taken much longer than anticipated.

Denny Wernham, ESA’s Aladin Instrument Manager, remarked, “The very successful results on Aladin are testimony to the dedication, determination and expertise of the team in Toulouse, who have overcome many technical hurdles to deliver the instrument to their UK colleagues. It is a really tremendous achievement and we would like to congratulate them for all their efforts.”