All of the starlight ever produced calculated by scientists

If you have ever wondered how much starlight reaches Earth from the billions upon billions of stars that have populated the Universe since its beginnings, then you might be surprised to know that excluding the light which comes from our own sun and galaxy, the rest is equivalent to the light from a 60-watt light bulb viewed in complete darkness from about four kilometres (2.5 miles) away.

If the answer seems somewhat unimpressive, the actual number of photons (particles of visible light) behind this dim-sounding analogy, is anything but underwhelming. According to new measurements by a team at Clemson University, Florida, the number of photons that escaped into space after being emitted by stars translates to 4 x 1084. To put that into context that is the number four followed by 84 zeros!

Despite this staggeringly large number, the reason we see so little of the light is because the Universe is almost incomprehensibly huge and the photons have a lot of room to spread out in. With the exception of the glow from our Moon, some visible stars and the ethereal glimmer of the Milky Way, this is also the reason why the sky is dark at night.

To calculate all of the starlight ever produced throughout the history of the observable Universe, the team analysed nine years worth of gamma-ray output from 739 blazars – galaxies with monster black holes at their centres – and their interaction with the extragalactic background light (EBL) by NASA's Fermi Gamma-ray Space Telescope; a feat that has never been done before, said Marco Ajello, lead author of a recent research paper submitted to Science.

The EBL can be described as a cosmic fog composed of all the ultraviolet, visible and infrared light emitted by stars or from dust surrounding stellar sources. Gamma rays on the other hand are the most energetic form of light. They are so energetic, that when they collide with light of the right frequency they can convert into matter through Albert Einstein's famous equation E=mc2.

When gamma rays collide with the cosmic fog, they leave an observable imprint, which allows the density of the fog to be measured not just at a given place but also at a given time in the history of the Universe.

"Gamma-ray photons traveling through a fog of starlight have a large probability of being absorbed," said Ajello. "By measuring how many photons have been absorbed, we were able to measure how thick the fog was and also measure, as a function of time, how much light there was in the entire range of wavelengths."

Time was measured in blocks of billion years, so the total amount of starlight of one billion years ago, two billion years ago, seven billion years ago, etc. - all the way back to when the first stars were forming. “This allowed us to reconstruct the EBL and determine the star-formation history of the Universe in a more effective manner than had been achieved before,” said postdoctoral fellow Vaidehi Paliya.

Part of the analysis showed that the peak of star formation occurred around 10 billion years ago and although new stars are continually created – seven new stars are born in our Milky Way galaxy every year for example – stars are not being produced at such a prolific rate as they once were.

It also places important new limits on the amount of starlight scientists expect to see in those first billion years – an interesting, but largely unexplored epoch in the Universe that has not yet been probed by current satellites. "Our measurement allows us to peek inside [this epoch],” concludes Ajello. “Perhaps one day we will find a way to look all the way back to the Big Bang. This is our ultimate goal." 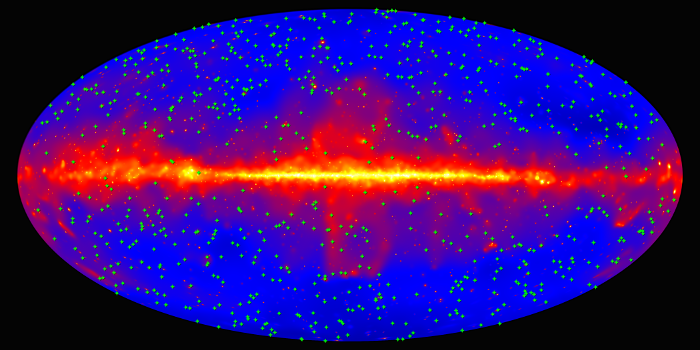 This map of the entire sky shows the location of 739 blazars used in the Fermi Gamma-ray Space Telescope’s measurement of the extragalactic background light (EBL). The background shows the sky as it appears in gamma rays with energies above 10 billion electron volts, constructed from nine years of observations by Fermi’s Large Area Telescope. The plane of our Milky Way galaxy runs along the middle of the plot. Image: NASA/DOE/Fermi LAT Collaboration