News related to outer space is largely along predictable lines. It deals with advances in space launches, satellites, asteroids, space security or the looming threat of an incoming asteroid, at best. The phenomenon of “Breaking-News” that shocks one out of the usual humdrum of day-to-day living is largely non-existent with regards to space. That was so until on 12 Oct 2016, Russian Scientist Igor Ashurbeyli, project team leader and founder of Asgardia announced the birth of a new space nation Asgardia in outer space 1. The plan is to launch Asgardia’s first satellite in 2017 and eventually have a space station where some, but not all, of Asgardia’s 150 million nationals would live and work. As of now, Ashurbeyli would not provide any details about the satellite or what its function will be, but said it was "100 percent funded." 2

The news is shocking in that it proposes a settlement on man-made space craft rather than natural space bodies like planets or asteroids. It also seeks a nation in outer space. Similar claims on outer space settlements have been made for quite some time. The head of ESA spoke about a Lunar village, many more spoke about colonising Mars and the US came up with federal law amendments to allow appropriation and legal mining on asteroids. As of 2016, one is wiser in hindsight considering that many companies that had announced elaborate plans of landing and colonising Mars are nowhere close to reaching the red planet. Having a few robotic contraptions on Mars, does not amount to colonisation or habitation. It actually points to the contrary. The table below serves to illustrate the reality-fantasy disconnect and lends evidence to the challenges in the endeavour. 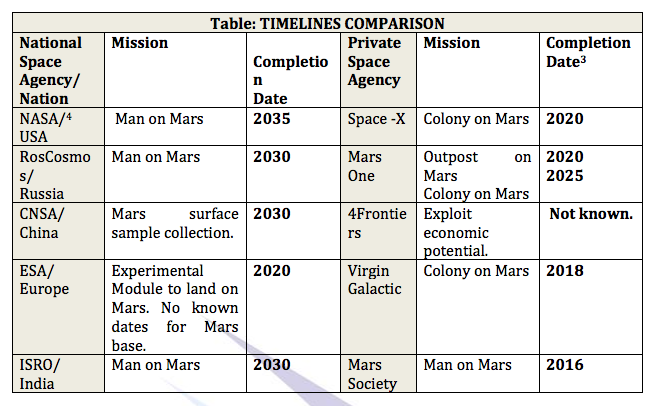 A variety of inferences can be drawn from the above table. Quite clearly, while state agencies are reticent and cautious, private agencies display no such inhibitions. As of October, the Mars Society is quiet and has no pronouncements of mission accomplishment or otherwise till date. The case with Virgin galactic can be expected to be no different.

However, what makes the Asgardia proposal distinct is that it seeks habitation on a space station rather than an existing planet, asteroid or any other kind of celestial body. Thus, regardless of the technological challenges, the concept is legally sound and largely faultless. It does not seek to appropriate a celestial body and consequently abrogates no existing law in outer space and instead forces one to relook at the entire affair. The aspects related to discovery, appropriation and colonisation are absent. The concept apparently builds largely upon existing and proven technologies and relies lesser on unknown and unproven technologies. For instance, astronauts have been on the International Space Station for decades and the concept only seeks to enhance the ability of humans to live for longer times on man-made platforms. The ISS is not devoid of habitation issues even today. Space Station endeavours are complex, costly and technologically challenging with very little visible return. For instance, going by NASA, the International Space Station (ISS) has cost the U.S. over $50 Billion and its international members over $100 Billion 5. It is reportedly the most expensive single object ever built by mankind 6 and yet the dividends are not visibly manifest to the average man on earth. This causes some to question the prudence of continual investment in such extra-ordinarily costly endeavors 7. And yet, the questions, in most cases are swamped out by the groundswell of aspiration to reach for the stars. A fact that finds ample evidence in the programs of space faring nations that pump in vast amounts of money and resources to achieve the goal of space exploration. Apart from space faring nations, even nations with very nascent space capabilities like the UAE aspire to reach Mars by 2021. Huge amounts of money are accordingly pumped into such endeavours. Quite clearly, money is the lesser issue, the greater issue is the scope of technologies and the legalities involved. The Asgardia proposal manages to skirt two of the prime issues involved and in that lies the merit of the proposal. It enables bridging or at least closing-in of the reality-fantasy gap of space habitation.

The thought driving the project is abstract and novel in that it perhaps points the pathway to making future space habitation more possible. There exist a variety of issues at this stage. It could be argued that nationality issues are normally fraught with problems and at the same time there exists the counter argument that a vast body of legal literature as also institutions to draw upon and address these issues. Similarly, it could be argued that no human could possibly live without the usual sights, sounds, flora, fauna and the general earthly environment. However, existing technology enables creation of artificial environments that mimic the natural world. For example, there exist yachts that are modified to resemble tropical islands, former missile shelters have been redesigned for luxury living, large hangars have been converted to green houses, etc. Habitation design is in a significant stage of maturity and designing satellites for human habitation or long duration stays are not something in the realm of science fiction today. Again, the Asgardia project only builds upon existing competencies and that is what takes the project out of the realm of science fiction into reality. At the very least, it provides an alternate platform for human survival in case of an earthly catastrophe. The year 2017 is close by and it augurs well to watch how the concept unfolds in reality.