A new GaLactic and Extragalactic All-sky MWA (“GLEAM”) survey has produced a catalogue of 300,000 galaxies observed by the MWA telescope in Australia. This is the first radio survey that shows the sky in such vivid color. According to lead author of the study Dr. Natasha Hurley-Walker from rom Curtin University and the International Centre for Radio Astronomy Research (ICRAR), "The human eye sees by comparing brightness in three different primary colours – red, green and blue," she said. "GLEAM does rather better than that, viewing the sky in each of 20 primary colours. That's much better than we humans can manage, and it even beats the very best in the animal kingdom, the mantis shrimp, which can see 12 different primary colours." 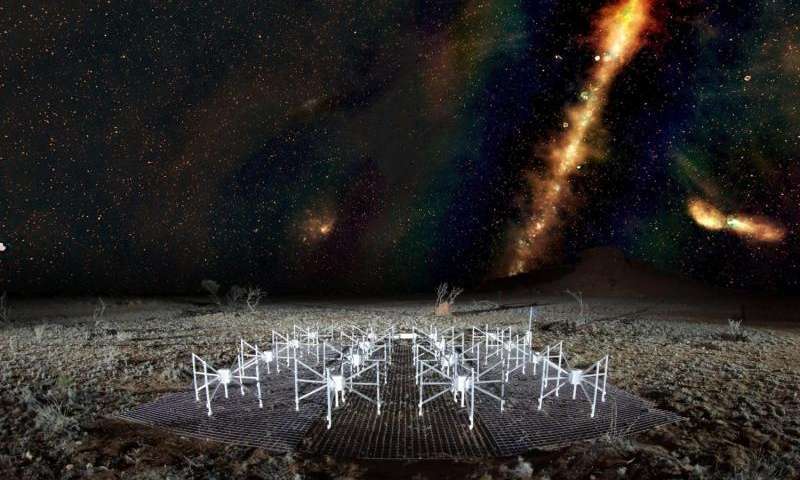 A 'radio colour' view of the sky above a 'tile' of the Murchison Widefield Array radio telescope, located in outback Western Australia. The Milky Way is visible as a band across the sky and the dots beyond are some of the 300,000 galaxies observed by the telescope for the GLEAM survey. Red indicates the lowest frequencies, green the middle frequencies and blue the highest frequencies. Credit: Radio image by Natasha Hurley-Walker (ICRAR/Curtin) and the GLEAM Team. MWA tile and landscape by Dr John Goldsmith/Celestial Visions

GLEAM uses frequencies from 70 to 230 MHz to observe radio waves traveling through space and produce high-resolution survey of the sky. Dr. Hurley-Walker's team plans to use the survey to research galaxy cluster collisions. "We're also able to see the remnants of explosions from the most ancient stars in our galaxy, and find the first and last gasps of supermassive black holes,” she said.

The GLEAM survey is an important step on the way to the low frequency part of the Square Kilometer Array radio telescope, which will be built in Australia in the near future. According to the MWA director Dr. Randall Wayth, "It's a significant achievement for the MWA telescope and the team of researchers that have worked on the GLEAM survey. The survey gives us a glimpse of the Universe that SKA-low will be probing once it's built. By mapping the sky in this way we can help fine-tune the design for the SKA and prepare for even deeper observations into the distant Universe."
GLEAM is one of the biggest radio surveys in existence, with an enormous survey area, and results that can be used across many areas of astrophysics.

The full results of the “GaLactic and Extragalactic All-sky Murchison Widefield Array (GLEAM) survey were published on October 27, 2016 in the Monthly Notices of the Royal Astronomical Society