A device that combines bacteria and nanowires to capture carbon dioxide from the air and convert it to useful organic products has been developed by scientists to help would-be Mars colonisers settle on the planet.

It is thought that our nearest planetary neighbour, Mars, once had a thick atmosphere that retained enough heat for liquid water to flow on the planet’s surface. However much of this atmosphere has been lost over billions of years, leaving behind a thin, tenuous gas layer that is made up of about 96 percent carbon dioxide (CO2) - a level that is toxic to humans if breathed in directly.

Terraforming Mars to make its surface habitable for Earth-based life is a subject that some are now considering as a serious undertaking one day. While some propose a solution that could be applied on a large scale, there are other methods that could help would-be off-world settlers colonise smaller areas of Mars bit by bit.

One such option currently under investigation is the Biohybrid. For the past eight years, chemists at the University of California, Berkeley, and Lawrence Berkeley National Laboratory (Berkeley Lab) have been working on a machine that can capture the energy of sunlight to convert carbon dioxide – the chief constituent of Mars’ atmosphere – and water into building blocks for organic molecules. These organic molecules could then be used in the manufacturing of plastics, fuel and even drugs in situ on Mars.

The Biohybrid works by utilising nanowires – thin silicon wires about one-hundredth the width of a human hair – that are coated with a bacteria called sporomusa ovata.

The nanowires, which are packed together to create a silicon “forest”, absorb light, generate electrons and transport them to the bacteria to kick-start a chemical reaction.

"These silicon nanowires are essentially like an antenna: They capture the solar photon just like a solar panel," said project leader Peidong Yang, professor of chemistry and the S. K. and Angela Chan Distinguished Chair in Energy at UC Berkeley.

It works on the same principle as photosynthesis in plants, which naturally convert carbon dioxide and water to carbon compounds, mostly sugar and carbohydrates.

However, the biohydrid instead coverts the incoming solar energy into a two-carbon molecule called acetate: essentially acetic acid, or vinegar. The ethyl variety I.e. ethyl acetate, is often used on Earth in a wide-range of applications for enamels, lacquers, dry cleaning and also to remove nail varnish.

The advantage of using nanowires for such a process is that while photosynthesis is suitable for a plant’s needs, its not an overly efficient method for synthesising nutrients. Photosynthesis typically converts less than one-half percent of solar energy to carbon compounds, whereas the biohybrid can achieve an efficiency of 3.6 percent.

There is one plant that can out-perform the device; sugar cane. The tall, fibrous, tropical grass can convert CO2 to sugar with a 4-5 percent efficiency. But scientists are a long-way off yet from cultivating actual plants on the Red Planet.

Plus, the acetate molecules that the biohybrid manufactures could also be used to produce many other organic products by feeding it to genetically engineered organisms, such as bacteria or yeast.

These microorganism’s also benefit from being considerably lighter and easier to transport to Mars than the products themselves, such as fuel and drugs, which would otherwise be too expensive to ship from Earth.

"For a deep space mission, you care about the payload weight, and biological systems have the advantage that they self-reproduce: You don't need to send a lot,” said Yang, who was one of the first to turn nanowires into solar panels, some 15 years ago.

The only other requirement, besides sunlight, that the hybrid needs to function is water. Although water is produced as part of the synthesis program, it still needs some from an external source to facilitate the reaction.

This should not be a problem however, said Yang as there are numerous studies to show that water is relatively abundant in the polar ice caps on Mars and that it likely lies frozen under the martian subsurface over most of the planet.

On the plus side, the additional oxygen that the hybrid pumps out could be used to help replenish a colonists' artificial atmosphere, which would need to mimic Earth's 21 percent oxygen environment to enable humans to breathe unaided without a mask.

But it is not just beneficial for expeditions to Mars. The biohybrid can also pull carbon dioxide from the air on Earth to help address climate change issues.

Our world is being faced with increasing temperatures year after year and nature is struggling to keep up. Many scientists think that an excess of human-produced CO2 in the atmosphere is a key component in this problem, so anything we can do to reverse the damage caused by the increase, will hopefully go some way to offsetting an ever-increasing level of CO2.

The biohybrid is still being tweaked to increase the efficiency of the machine and Yang is also looking at modifying the system to make it more versatile.

For example, Yang has embeded quantum dots in the bacteria's own membrane that act as solar panels, absorbing sunlight therefore removing the need for silicon nanowires. These cyborg bacteria also make acetic acid, says the chemist. 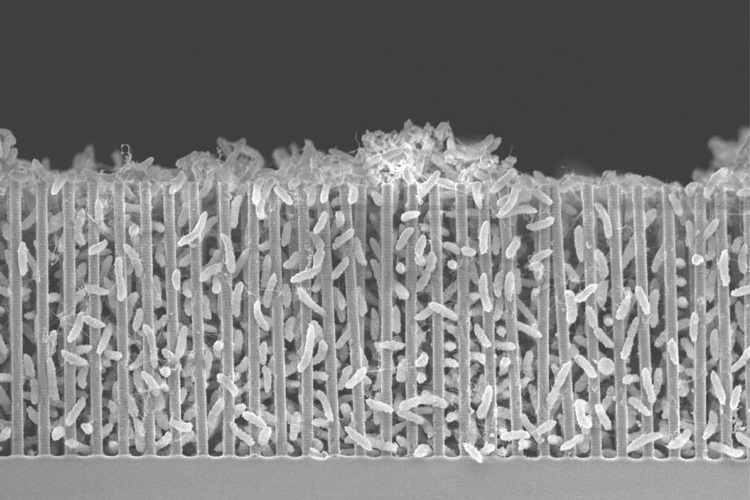 A scanning electron micrograph of a nanowire-bacteria hybrid operating at the optimal acidity, or pH, for bacteria to pack tightly around the nanowires. Close packing gives more efficient conversion of solar energy to carbon bonds. The scale bar is 1/100 millimeter, or 10 microns. Image: UC Berkeley by Peidong Yang.