An asteroid, 15 meters in diameter and traveling at 29,160 km/h, came within 40,000 kilometers of Earth on September 7th, 2016. Although its trajectory course managed to avoid communication and weather satellite orbits, it came quite close. After passing by the Earth the asteroid, called 2016 RB1, headed for the Moon. The asteroid was photographed by a number of observers in Australia, Slovak Republic, and Italy. According to Ernesto Guido, who photographed 2016 RB1 in Siding Spring, Australia, using a remotely-controlled telescope, "It was shining about as brightly as a 12th magnitude star.” 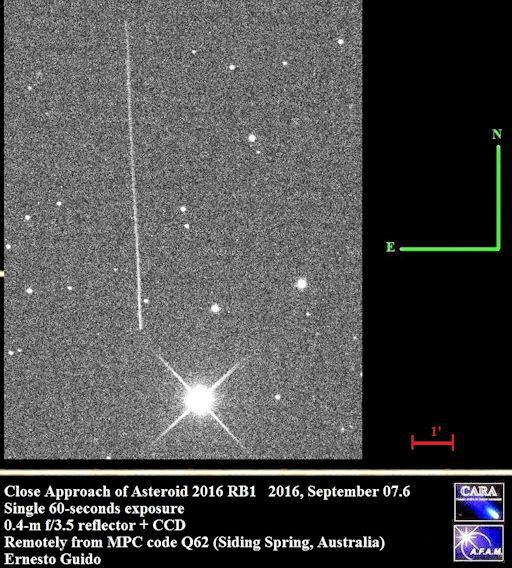 The asteroid is a frequent visitor to planets in the Solar system – in October 2017 it's expected to pass by Venus before returning to Earth in June 2020. None of these fly-bys are expected to end in impact.

The asteroid was discovered on September 5th by the Cassegrain reflector telescope at Catalina Sky Survey in Arizona, US. According to NASA, the asteroid approaches planet Earth roughly once every two to four years. Calculations show that the first time the asteroid came close to Earth was on July 3rd, 1976.

The first week of September has seen more than its fair share of asteroids that have come close to the Earth, with 2016 RB1 being the third one. The other two asteroids, 2016 RR1 and 2016 RS1 both flew by on September 2nd, at 0.32 and 0.48 lunar distances respectively.

The potential problem posed by close-flying asteroids has been an acknowledged concern among the international space community for some time, as many such asteroids are discovered quite late in their approach to Earth. A number of projects aimed at developing a viable planetary defence strategy have been suggested and implemented, including the Global Space Governance Study, the Planetary Safeguard System, and URBOCOP – Universal Robotic Battle Cosmic Platform, the latter presented by ROOM founder Igor Ashurbeyli at the 4th Manfred Lachs International Conference on Conflicts in Space and the Rule of Law in Montreal, Canada.