Cold Spot in CMB could be evidence for a multiverse

A ‘Cold Spot’ anomaly that was uncovered in the cosmic microwave background (CMB), could turn out to have far more exotic origins than the super void explanation it was initially given, say researchers.

The cosmic microwave background (CMB) is radiation left over from the Big Bang that permeates the whole of the sky. It is the oldest light in the universe, dating back to the epoch of recombination when charged electrons and protons first came together to form electrically neutral hydrogen atoms.

This relic radiation has been extensively studied and mapped, most lately by the Planck satellite, and subtle fluctuations in temperature distinguished on the CMB are said to have given rise to the vast cosmic web of galaxy clusters as the Universe expanded, that are seen today.

The CMB has a thermal black body spectrum at a temperature of 2.72548 ± 0.00057 K above absolute zero (or -270.43 degrees Celsius), however this faint background glow does have temperature fluctuations and some anomalies; one being the Cold Spot.

The Cold Spot region, which was once thought to be underpopulated with galaxies, is now thought to represent something else according to a new survey led by researchers at Durham University's Centre for Extragalactic Astronomy.

By analysing the redshifts – the stretching of light – of 7,000 galaxies, harvested 300 at a time using a spectrograph deployed on the Anglo-Australian Telescope, the team looked at the pattern of clusters of galaxies in the foreground of the CMB Cold Spot, compared with clusters in an area with no background Cold Spot (see Figure 2). It was found that the number and size of low galaxy density regions in both areas are similar, making it difficult to explain the existence of the CMB Cold Spot by the presence of 'voids' or a ‘super-void.’

"The voids we have detected cannot explain the Cold Spot under standard cosmology. There is the possibility that some non-standard model could be proposed to link the two in the future but our data place powerful constraints on any attempt to do that,” said Professor Tom Shanks, who conducted the new survey along with postgraduate student Ruari Mackenzie.

As simulations of the standard model of the Universe give odds of a 1 in 50 chance that the Cold Spot arose spontaneously, could it be signs that our Universe is not alone?

'Perhaps the most exciting of these is that the Cold Spot was caused by a collision between our universe and another bubble universe. If further, more detailed, analysis of CMB data proves this to be the case then the Cold Spot might be taken as the first evidence for the multiverse - and billions of other universes may exist like our own,” added Shanks.

The idea of a multiverse has intrigued researchers and interested parties alike for a long time and although this idea will need to be further tested by more detailed observations of the CMB, a super void has never looked so interesting. 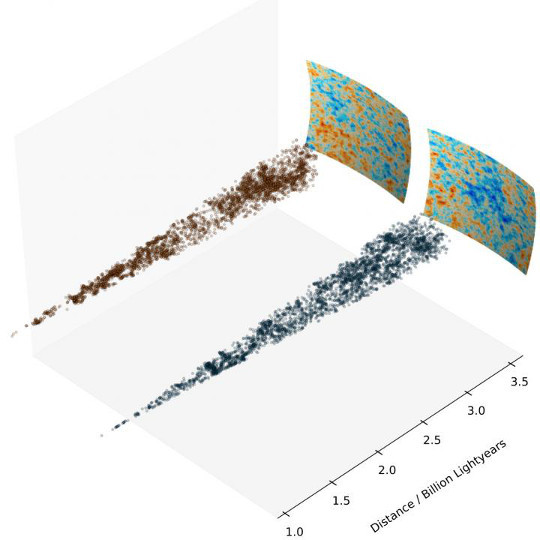 Figure 2. The 3-D galaxy distribution in the foreground of the CMB Cold Spot, where each point is a cluster of galaxies. The galaxy distribution in the Cold Spot (black points, at right) is compared to the same in an area with no background Cold Spot (red points, at left). The number and size of low galaxy density regions in both areas are similar, making it hard to explain the existence of the CMB Cold Spot by the presence of 'voids'.