If humanity wants to settle somewhere beyond our planet then one of the problems we will face is a shortage of molecular oxygen (O2) to breathe. Unfortunately for us, O2 is very hard to come by in the vast expanses of the cosmos. Not only that but in the frigid environment of outer space, or on planets with thin atmospheres, the heat required for chemical reactions to take place can also be sorely lacking. But now, by studying the chemistry of a comet, a team of researchers have found a way around this and the solution could also potentially even fight climate change on our planet.

Oxygen, in some form, is vital for complex animal life on Earth, but it didn’t just appear on our planet over night. Most scientists believe that for half of Earth's 4.6-billion-year history, the atmosphere contained almost no oxygen. It took something called the Great Oxidation Event some 2.3 billion years ago to start pumping substantial quantities of O2 into the skies, before life could use it to evolve beyond simple microorganisms that dominated the planet at the time. Oxygen now makes up nearly 21 percent of Earth’s atmosphere.

Finding such vast quantities elsewhere is going to be difficult and although we would be able to take some O2 with us on any interplanetary journey we undertake, it is not a feasible long-term solution. So how can we produce this vital chemical that we need to survive?

The answer has come from a surprising source; comets. When studying the tenuous streams of gas trailing behind comets as they whizz through the Solar System, scientists noticed that O2 was present – something that was not easily explained. For any reaction to happen, the chemical bonds holding the molecules together have to be broken, so that new ones can be made. Breaking bonds takes energy and normally that energy comes in the form of heat.

It is well-established that comets are laden with water and other compounds such as carbon dioxide (CO2), but these giant snowballs are not particularly renowned for being hot, or even warm. So how was O2 being created?

Two years ago, Konstantinos P. Giapis, a professor of chemical engineering at Caltech, and his postdoctoral fellow Yunxi Yao, proposed the existence of a new chemical process that could account for its production. Instead of using heat to synthesise O2, the duo suggested that kinetic energy was being used to generate the reactions instead.

Kinetic energy is the energy that an object has because of its motion. In this instance, the motion came from water molecules that had vaporised from the comets surface, and were then accelerated by the solar wind to crash back onto the comet at high speeds like extremely tiny bullets. The impact then rips apart oxygen containing species such as H2O or CO2 trapped on the icy body to produce molecular oxygen.

As promising as the theory sounded, there was still a stumbling block as far as CO2 was concerned. Carbon dioxide is one of the main building blocks of a comet, but breaking it apart is tough, really tough because it is a linear molecule, and you would have to bend the molecule severely for it to work, says Giapis.

Tackling the problem from a computer prospective, Giapis enlisted the help of Tom Miller, a professor of chemistry, and his postdoctoral fellow Philip Shushkov, who then designed computer simulations of the entire process to see how it could be done. This in itself was a monumental task, because these molecules have so much energy that their individual atoms vibrate and rotate around to an enormous degree. All that wiggling about makes simulating a reaction complex indeed. But eventually, they got CO2 to bend in the right way.

"In general, excited molecules can lead to unusual chemistry, so we started with that," Miller says. "But, to our surprise, the excited state did not create molecular oxygen. Instead, the molecule decomposed into other products. Ultimately, we found that a severely bent CO2 can also form without exciting the molecule, and that could produce O2."

Giapis then tested out the reaction by creating a reactor. This works in a similar principle to a particle accelerator, albeit at much lower energies than are found in these atom-smashing devices, and turns the CO2 molecules into ions by giving them a charge and then accelerating them using an electric field.

As impressive as this Giapis adds that such a device is not necessary for the reaction to occur. "You could throw a stone with enough velocity at some CO2 and achieve the same thing," he says. The ‘only’ caveat with this however is that it would need to be traveling about as fast as a comet or asteroid travels through space, said Giapis.

The current version of the reactor is a long way off from being a viable solution in producing breathable air for astronauts on Mars, or anywhere else, as it creates only one to two oxygen molecules for every 100 CO2 molecules shot through the accelerator. However Giapis knows this is a work in progress and one day he hopes that a variation of his reactor could be used on more useful scales to help humans explore the universe. It could also perhaps even fight climate change at home by pulling CO2 out of Earth's atmosphere and turning it into oxygen.

"Is it a final device? No. Is it a device that can solve the problem with Mars? No. But it is a device that can do something that is very hard," says Giapis. "We are doing some crazy things with this reactor." 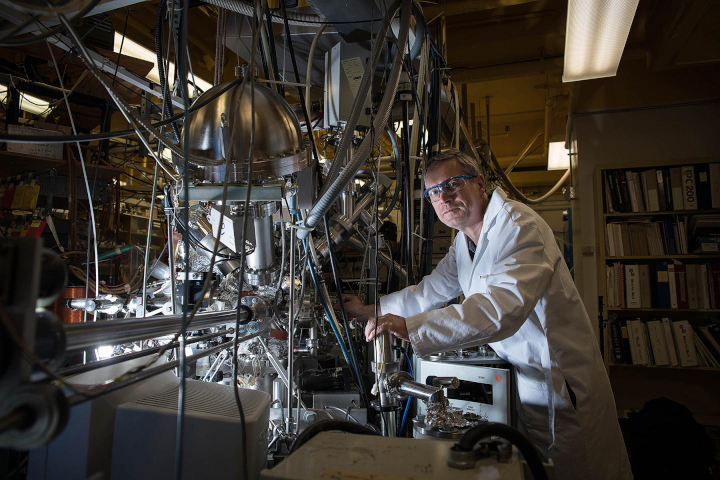