Crater evidence points to a past mega-tsunami on Mars

A 150 kilometre-wide hole in the Martian northern plains could be the lasting remnant of an impact crater which caused a mega-tsunami to wash over the Red Planet billions of years ago, say an international team of researchers from France, Australia and Spain.

News that Mars was once covered with a large ocean in its northern hemisphere has been circulating for years due to the abundance of geological evidence supporting such a claim. Three years ago, further evidence in the form of widespread sedimentary lobes called Thumbprint Terrains and channels carved out from the backward flow of water, led some researchers to suggest that these were signs that a giant tsunami had occurred not long after Mars has formed.

On Earth, many tsunamis are created when earthquakes caused by the grinding motion of plate tectonics, dislodges large sections of land under or above an ocean.

However our planet also bears the pock-marked scars of meteorites slamming into the ground and when these strike an ocean, such as the famous Chicxulub crater buried beneath the Yucatán Peninsula in Mexico, megatsunamis can form. In the case of Chicxulub, a wall of water 100 metres tall that would have reached all the way to Texas and Florida is expected to have caused widespread damage as it thundered over land.

Without plate tectonics to cause huge landslips, it is expected that any tsunamis on Mars would also be generated by an impacting body striking its surface. So the hunt has been on to find signs of the devastating blow that caused an ocean of water to pummel the Red Planet’s surface and etch out these distinctive features.

Those signs have been spotted in Lomonosov crater; a huge depression, likely moulded by a 14.5-by-19 kilometre meteor, surrounded by a substantial region of relatively smooth terrain known as Vastitas Boreali – the largest lowland region of Mars.

Of particular interest is the observation of a set of valleys in its southern rim area, say the team of scientists whose lead author on a paper recently submitted to Journal of Geophysical Research is F. Costard at Université Paris-Saclay, France, after they picked through data collected from the Mars Orbiter Laser Altimeter (MOLA), an instrument on the Mars Global Surveyor (MGS).

These mirror features seen in marine impact craters on Earth and are caused when the rim of the crater collapses inward after the meteorite smashes into the ocean. Water rushing back into crater after being forcefully removed in the impact then modifies the cavity further leaving behind tell-tale signs of the event.

To help corroborate the hypothesis, the team also ran numerical models based on the MOLA data. When combined, the mapping and the modeling allowed the team to investigate in detail the evolution of the impact and the resulting crater, and its effect on the surrounding landscape.

Coupled with the timing of the event, which occurred around the late Hesperian 3.3 billion years ago, all of the evidence points to Lomonosov crater being produced by a wayward space rock impacting into a shallow ocean less than one kilometre deep.

Although this and other compelling geological evidence favours such a scenario, scientists still can’t agree on whether a martian northern ocean existed or not in the planet’s early history.

Hoping to provide more conclusive evidence Costard and colleagues plan to examine the crater further using images from the big and powerful HiRISE camera stowed on board the Mars Reconnaissance Orbiter.

HiRISE (High Resolution Imaging Experiment) can take pictures that see features as small as a kitchen table, so this will help the team see the finer geomorphological details of the crater. These can then be used to compare against the backwash pattern generated from the numerical models for a more definitive answer. 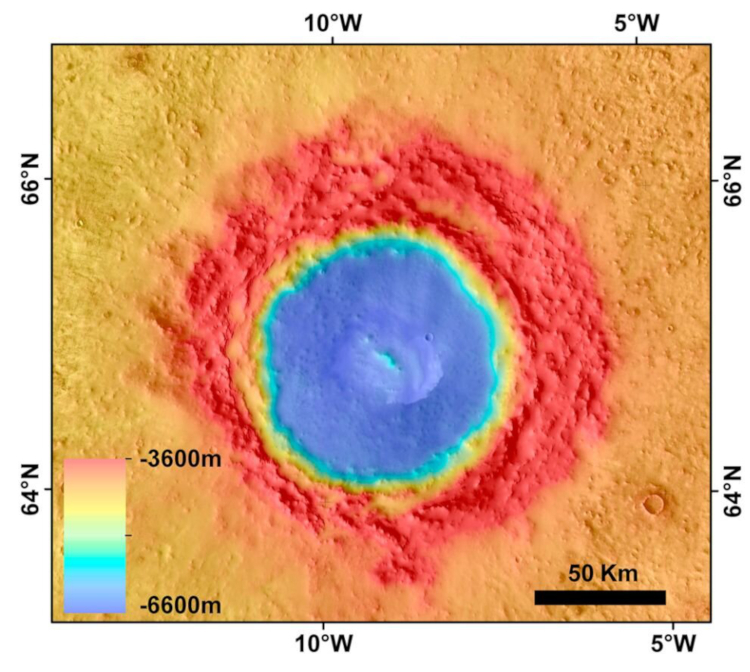