Debris from China's rocket may have hit African villages

China’s successfully maiden flight of its Long March 5B which lofted an experimental spacecraft into orbit last week, has come under scrutiny with reports suggesting that debris has hit parts of the Ivory Coast in Africa. Had its 20 ton core stage passed through Earth’s atmosphere 15-20 minutes earlier during reentry, the rocket's debris could have rained down on New York City, report those monitoring its progress.

China’s heavy lift launch system, the Long March 5B, is currently the most powerful member of the Long March rocket family and has been built to launch modules for China’s planned space station.

Bucking the design trend of other powerful orbital launch vehicles currently in operation, such as ULA’s Delta IV Heavy and SpaceX’s Falcon Heavy, the Long March 5B only uses one stage to get into space.

Typically, large, space-bound rockets consist of at least two stages; the first stage provides the majority of thrust during the first few minutes of launch and typically returns to Earth by plummeting into the ocean before reaching orbit.

Then, with a lot less payload to transport and a thinner upper atmosphere to negotiate, a second stage kicks in to push the rocket into orbit.

The Long March 5B however just has the one stage. After using four liquid-fuelled strap-on boosters to get it off the ground, its weighty core stage made its way into orbit with the aid of two YF-77 main engines.

But what goes up, often has to come down and without a means to steer the craft over a safe location, such as ocean, a craft will be subjected to an uncontrolled re-entry.

This was the case for China’s Tiangong-1 space station back in 2018 and it appeared to be the case for the remains of the Long March 5B as potential reentry areas in Australia, US, Africa and the Atlantic were identified as its orbit began to decay.

Progress of the rockets potential landfall locations were reported by keen watchers of the rocket, including Jonathan McDowell, an astronomer at the Harvard-Smithsonian Center for Astrophysics, who had been tracking the object for two days.

According to tweets by McDowell, Hollywood, JPL and Colorado Springs were all under the reentry path of the rocket. “I’ve never seen a major reentry pass directly over so many major conurbations!” said McDowell via Twitter.

New York City was next in line when at 11:21 ET, the CZ-5B rocket was predicted to pass 170 km directly above Central Park, reported McDowell.

Shortly afterwards the US military confirmed that the core stage had re-entered Earth's atmosphere at 11:33am ET (15:33 UTC) on Monday over the Atlantic Ocean.

Clear of the US, the core stage, including the dense turbomachinery of the two YF-77 main engines, which were unlikely to have burnt up completely, made its way towards Africa.

“The TIP message [on Space-Track] is out, showing reentry at 1534 UTC at location 20W 20N, just before the ground track passed over Nouakchott [Mauritania]”, reported McDowell.

In a discussion with ArsTechnica, the astronomer said that he would not be surprised if several bits of the core stage with masses of the order of 100 to 300kg hit the surface.

Indeed, McDowell later reported that a 12-m-long object had crashed into the village of Mahounou in Cote d'Ivoire, Africa. Pictures of the debris have now been posted on social media and show a pipe-like fragment that could have originally measured about 21 metres long but may have broken in half on re-entry.

“It's directly on the CZ-5B reentry track, 2100 km downrange from the Space-Track reentry location,” said McDowell via Twitter. “Possible that part of the stage could have sliced through the atmo that far,” he added.

Further reports that some villages, such as N'guinou along the reentry path were damaged by falling debris. Thankfully reported McDowell, no casualties have been announced. 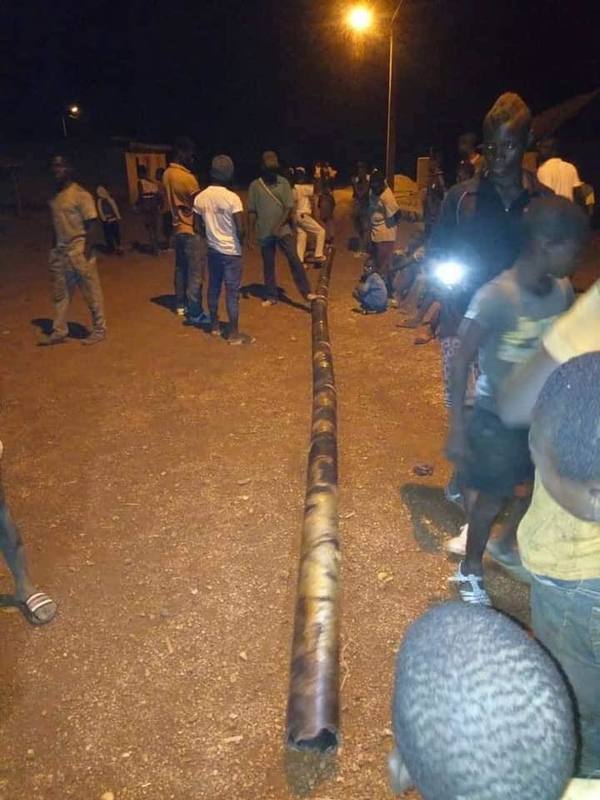 Reports of a 12-m-long object crashing into the village of Mahounou in Cote d'Ivoire could that from China's Long March 5B which made an uncontrolled reentry earlier this week. Image by Aminata24 via Jonathan McDowell on Twitter.

If you've enjoyed reading this article, please consider subscribing to ROOM Space Journal to gain immediate and full access to the latest magazine feature articles and receive your own print and/or digital copies of ROOM magazine delivered direct to your door or electronically.