At the end of March this year, India carried out an unexpected anti-satellite missile test by successfully obliterating a low earth orbit target in space. The test however received widespread global criticism, as although the space-faring nation played down any reports that ensuing space-debris would be problematic, other nations were not convinced about their claims.

The test target, a 740 kilogram satellite launched by India two months earlier for the purpose of the exercise, sat in an orbit at 300 kilometres, said the country’s Defense Research and Development Organization (DRDO). This distance is below that used by many of the hundreds of working satellites in space in a low Earth orbit (LEO), a region that corresponds to a range of altitudes anywhere from 400 and 1200 km above Earth, and as such any unwanted space junk fragments should not interfere with any operational satellites.

Now, a thorough analysis of data – available to the public – from both the DRDO and U.S. military sources, shows that India’s predictions were far off the mark and that the test wasn’t performed as “responsibly” as originally claimed.

How does the end result differ from that predicted by the DRDO? Firstly, the missile hit the target satellite on a clear upwards angle, rather than “head-on” as claimed by DRDO, says Marco Langbroek, a consultant with the Space Security Center of the Royal Dutch Air Force and Leiden Observatory who has recently analysed the data.

This impact position means that that some of the ejected fragments were pushed into higher orbits, which subsequently leads to debris having longer orbital lifetimes. The Indian government had initially claimed it would take no longer than 45 days for any space junk to burn up as they re-entered the atmosphere, but debris at much higher altitudes will take substantially longer to be removed from the skies - possibly up to ten times as long.

And that's not the worst of it; some of that debris is now suspected to be in an orbit shared by the International Space Station. “As much as 79 percent of the larger debris fragments tracked have apogee altitudes at or above the orbit of the International Space Station. Most of the tracked debris generated by the test, orbit between 300 km and 900 km altitude…As these debris fragments are in polar orbits, they are a potential threat to satellites in all orbital inclinations at these altitudes,” says Langbroek in his analysis.

India’s ASAT test is not the first to provoke controversy. In 2007, China shot down a satellite in LEO at an altitude of 800 kilometres and at the time, the fallout of the explosion produced more than 2,000 pieces of debris; hundreds of which are thought to be still floating around in orbit now and have little chance of being disposed of for decades to come.

Other reports on India's missile test have also confirmed that at least a dozen fragments have reached altitudes above 1,000 kilometres, with one fragment spotted at 2,222 kilometres, according to research from Analytical Graphics Inc. (AGI). This is nearly eight times higher than that claimed by the Indian government say the company.

Although no satellites are known to have been hit by fragments from India’s ASAT test, data studied by AGI identifies 25 spacecraft most at risk of crossing paths with the debris; including Dove satellites operated by commercial company Planet, multiple Russian Kanopus remote sensing satellites and the European Space Agency’s Aeolus wind-mapping satellite, which was launched in August last year.

The newly-made fragments of discarded metal are seen as small point-like dots spread horizontally across the frame in the remarkable video captured by Deimos. The white streaks, which themselves look like trails of space debris shooting through the skies, are in fact stars. They appear as dashed lines because the Deimos observatory, located in Spain, follows the debris objects as they move through space and not the stars.

“Leaving a trail of debris in its wake, this fragmentation event provides space debris experts with a rare opportunity to test their understanding of such hugely important processes”, explains Tim Flohrer, ESA's Senior Space Debris Monitoring Expert. With over 20,000 pieces of debris larger than a softball, 500,000 pieces of material the size of a marble or larger and many millions of pieces that are so small they can’t be tracked, much research is needed to help mitigate the burgeoning space junk problem that litters the space so close to our planet. 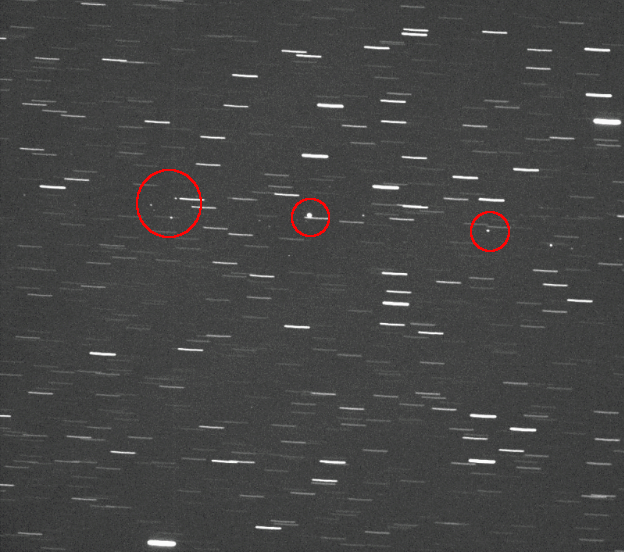 Rocket body fragments captured by the Deimos Sky Survey (DeSS), some highlighted in red, as they join the millions of other pieces of space debris in the skies above Earth. Image: ESA.