Dutch-based space research firm SpaceBorn United is targeting a ground-breaking space mission in the first half 2023 that will see the fertilisation of rodent embryos in artificial gravity followed by a pregnancy and birth in a laboratory back on Earth.

Using SpaceBorn’s new ‘Space-Embryo-Incubator’ flying in low Earth orbit (LEO), several mice will become the first animals in history to be conceived and born in this way.

The agreement paves the way for an initial flight next year of the ARTIS (Assisted Reproduction Technology in Space) mission which will use Independence-X’s low-cost launch service and re-entry capsule.

“Our ARTIS prototype is in full development to prepare for the first test flight. Our goal to enable safe embryo development in space starts with testing the prototype in space with mouse sperm and oocytes,” said Dr Edelbroek.

“A series of ARTIS missions in the coming years will enable research on partial gravity effects on embryo development and help us move towards the ultimate goal of human reproduction and childbirth in space.”

The payload contains male and female reproduction cells and, once deployed in LEO, the embryos are automatically impregnated and start developing in an artificial, Earth-like level of gravity. After five days the incubator is returned to Earth via the Independence-X re-entry vehicle, known as MERCAP (Microgravity Experiment Re-entry Capsule).

In laboratory conditions back on Earth, the embryos will be placed in healthy mouse pups for gestation and birth to occur, their development monitored and compared to control samples.

Independence-X is a Malaysian space company that has developed a small launch vehicle called DNLV (Dedicated Nano Launch Vehicle) with a maximum payload of 200 kg and capable of putting satellites into LEO.

“For the first time an unmanned orbital laboratory with re-entry capabilities is being flown for bio tech research and we see this as a key to unlock potential for the human expansion into the deep space.

“Independence-X will provide the re-entry vehicle and the on board support system, SpaceBorn United will provide the precious microfluidic payload to carry out the experiment in space,” he added.

“This MOA will mark the beginning of human reproduction in Space and the next step for humanity to become a multi-planetary species.”

IDXA is a company of industry professionals and academics based at Sendayan Metropark in Negeri Sembilan, Malaysia. As well as serving the global space industry, it aims to create a Malaysian space hub and contribute to socio-economic development of the region through space-related technologies.

SpaceBorn United, based in Eindhoven, The Netherlands, describes itself as the first bio-tech and mission development company working to make human conception and embryo development in space feasible, eventually enabling human pregnancy and birth in space.

Dr Edelbroek, who is also an MP of the space nation Asgardia which was formed in 2016 and has the stated goal of facilitating the first human birth in space, added: “If humanity wants to become a multi-planetary species we also need to learn how to reproduce in space. This is what we are working towards.” 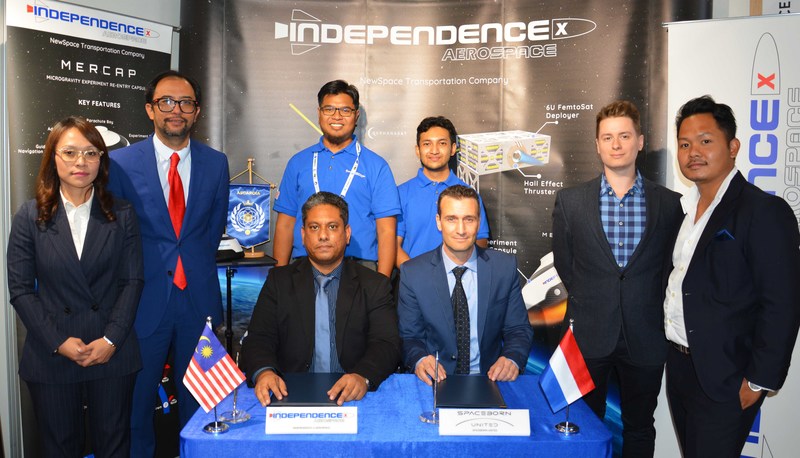