After days of hype over who will be the first tourist to ride a SpaceX rocket around the Moon, Elon Musk revealed last night that it would be art collector and businessman Yusaku Maezawa, founder of online Japanese clothing company Zozo.

Maezawa has a few years yet to save for what can only be assumed will be a journey that is as memorable as it is expensive. Although Musk said he and Mr. Maezawa were not disclosing how much the lunar joy ride would cost, it is expected that the price tag will run into millions.

Big spending does not appear a problem for this art collector and former rock drummer as last year Mr. Maezawa paid $110.5 million for a Jean-Michel Basquiat painting of a black skull; the highest auction price ever paid for a US artist's work.

Sharing this epic adventure with the billionaire will be six to eight lucky artists who Maezawa said he would take as a way of inspiring their work. "They will be asked to create something after they return to Earth. These masterpieces will inspire the dreamer within all of us," he told reporters.

As for Maezawa, he told reporters that it was his lifelong dream to fly around the Moon, adding “for me, this project is very meaningful.”

The 800,000 kilometre round trip that will take five days to complete is currently scheduled for blast off in 2023. Mr. Maezawa and his fellow passengers will fly to the Moon onboard SpaceX's latest incarnation – the Big Falcon Rocket (BFR) – the company's new and improved launch system that was unveiled by Musk in 2016, but which is still yet to be built.

Musk has given little away about the details of the BFR but has said it is expected to stand 118 metres high and have a diameter of 9 metres. For comparison SpaceX’s workhorse the Falcon heavy measures 70 metres tall.

The SpaceX founder did tweet an artists impression of what the BFR might look like and its design resembles a much larger version of the now redundant space shuttles, with fins rather than rocket boosters attached to the rear.

With a cost for the BFR development expected to be around the $2 billion to $10 billion mark, no doubt Mr. Maezawa’s ticket will make a worthwhile contribution to getting the project off the ground. 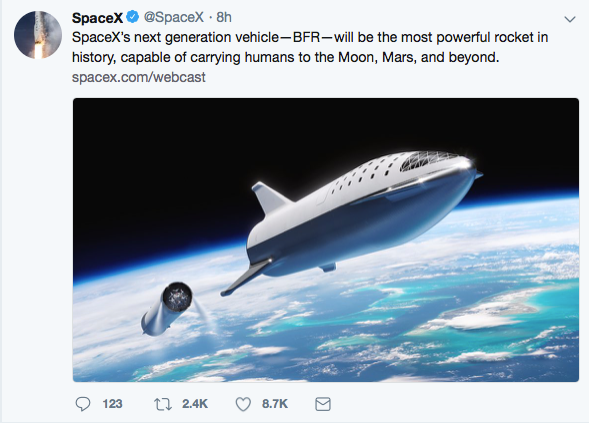