Have ancient filaments helped uncover the nature of dark matter?

Fuzzy particles and filaments. Separately, they may not sound like much, but together, they could be about to turn conventional thinking about the make-up of the Universe on its head.

Scientists have long suspected that a large proportion of the Universe is made up of dark matter – very cold and heavy, invisible particles that were also the likely key ingredient for brewing up the very first galaxies. How cold and heavy are these particles exactly? No one knows for sure; some think it could be plain old slow-moving cold dark matter, while others think it might be warm dark matter – a slightly lighter and faster version of the chillier stuff. However some are now postulating that it could it be something else altogether; fuzzy dark matter.

Similarly, it was once thought that when it came to how the Universe organised itself, it started off in a bottom-up way. In this scenario galaxies formed first, then over time they collected themselves into clusters, then super-clusters until eventually great long strands of gas spread throughout the cosmos, forming web-like structures as it grew.

Now though, it is generally believed that it is the other way around - it is the web-like filaments which fuelled the formation of clusters of galaxies and galaxies which grew in pockets of dense matter at places where the filaments crossed.

One group, an international collaboration of scientists led by the RIKEN Cluster for Pioneering Research, has been looking at filaments of gas connecting galaxies in a large, distant proto-cluster located about 12 billion light years away in the early Universe.

Using the Multi Unit Spectroscopic Explorer (MUSE) at the ESO Very Large Telescope (VLT) in Chile and the Suprime-Cam at the Subaru telescope, the team’s detailed observations have helped uncover that these filaments are huge and extend over more than one million parsecs – a parsec being just over three light years.

Whats more, the group found that radiation pouring out of these gas-packed intersected regions between the enormous filaments was too high to be from the ultraviolet background radiation of the Universe. Instead it was a result of active galactic nuclei (supermassive black holes) and "starbursting" galaxies pumping out stars at a prodigious rate.

The length of the filaments and the pockets of gas providing the fuel for intense star formation and the growth of super massive black holes within the proto-cluster, all fit nicely within the framework of galaxy formation, if the dark matter in question is cold. Fuzzy is not cold, but then neither is it warm.

"Previous observations had shown emissions from blobs of gas extending beyond the galaxies, but now we have been able to clearly show that these filaments are extremely long, going even beyond the edge of the field that we viewed,” said Hideki Umehata of the RIKEN Cluster for Pioneering Research and the University of Tokyo, the first author of the paper recently published in Science. “This adds credence to the idea that these filaments are actually powering the intense activity that we see within the galaxies inside the filaments."

Meanwhile, another team of scientists at MIT, Princeton University, and Cambridge University, has for the first time, simulated what early galaxy formation would have looked like if dark matter were "fuzzy," rather than cold or warm.

Fuzzy dark matter, a relatively new concept, consists of ultralight particles each about 1 octillionth (10-27) the mass of an electron. In comparison, a cold dark matter particle is far heavier –about 105 times more massive than an electron.

"The nature of dark matter is still a mystery,” says Dr Anastasia Fialkov at the University of Sussex, who helped conducted the research. “The fuzzy dark matter theory makes sense in terms of fundamental physics, for instance, string theory, and so is an interesting dark matter candidate.”

Even though some of the earliest extended filaments in the fledgling Universe have been observed by Umehata and colleagues, it doesn't necessarily confirm that the cosmos is packed with fuzzy dark matter. It will take more telescope time to ascertain the true type of dark matter because as the Universe has aged, galaxies have changed shape.

"The first galaxies in the early universe may illuminate what type of dark matter we have today," says Mark Vogelsberger, associate professor of physics in MIT's Kavli Institute for Astrophysics and Space Research. "Either we see this filament pattern, and fuzzy dark matter is plausible, or we don't, and we can rule that model out. We now have a blueprint for how to do this."

With a new generation of telescopes getting ready for launch – including the James Webb Space Telescope (JWST) – scientists will hopefully have the tools to look further back into the history of the Universe than ever before.

And if the fuzzy dark matter theory is proven right, concludes Fialkov, “then we will have nailed down the nature of dark matter: one of the greatest mysteries of all.” 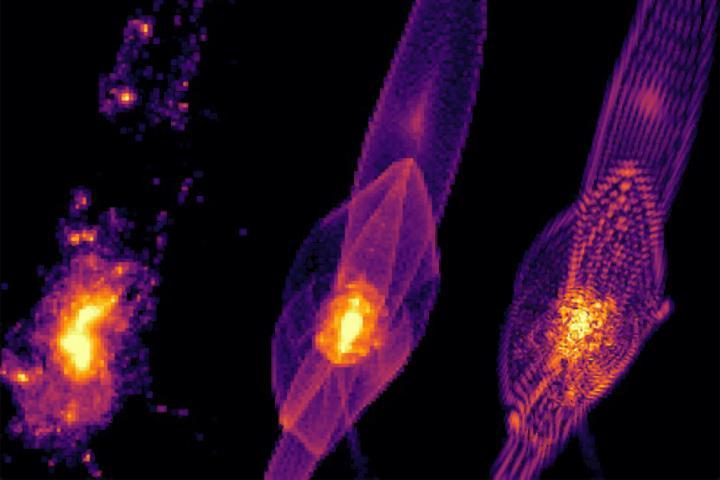