Mars officially has a mole on its surface which is preparing to dig deep. This mole however is not of the furry mammal variety, but instead is part of the HP3 instrument NASA’s InSight lander has recently deployed to measure the Red Planet’s temperature.

InSight’s HP3 or Heat Flow and Physical Properties Package, successfully positioned itself about a metre away from the landers now-shielded seismometer. Its seismometer, known as SEIS which stands for Seismic Experiment for Interior Structure, did not arrive at Mars fully covered, but has since been enshrouded in a dome, by InSight, to protect it from the planet’s extreme weather.

With SEIS prepped for its task ahead, it is now time for HP3 to hog the limelight. In contrast to its quiet, stationary companion, HP3 will get the ground shaking, literally, as in order to do its job it needs to burrow a hole in the ground. And if all goes according to plan, it will dig up to 5 metres (16 feet) with its self-hammering mole. This is a substantial advancement on previous attempts by other NASA landers (Phoenix and Viking) which managed 22 centimetres at most.

Once deep in the martian surface, heat sensors in the mole itself will measure how easily heat moves through the subsurface – a property otherwise known as a soil's thermal conductivity.

"We're looking forward to breaking some records on Mars," said HP3 Principal Investigator Tilman Spohn of the German Aerospace Center (DLR), which provided the heat probe for the InSight mission. "Within a few days, we'll finally break ground using a part of our instrument we call the mole."

The mole, which looks something along the lines of a large jack to hoist your car up with, will stop every 50 centimetres to take a thermal conductivity measurement of the soil. This is after it has rested for two days to allow any heat created by the hammering motion to dissipate.

Despite its weighty-looking design, HP3 is actually quite light and weighs less than a pair of shoes said JPL's Troy Hudson, a scientist and engineer who helped design the instrument.

But don’t let this apparent delicate-sounding machinery fool you, as HP3 has been rigorously tested to withstand the motions of digging to at least 3 metres (10 feet) below the surface of another planet. “It took so much work to get a version that could make tens of thousands of hammer strokes without tearing itself apart; some early versions failed before making it to five meters (16 feet), but the version we sent to Mars has proven its robustness time and again,” added Hudson.

HP3 needs to get as far below the surface as possible to ensure the heat it measures comes from inside Mars and is not some spurious external phenomena. "That's why we want to get it belowground. Temperature changes on the surface, both from the seasons and the day-night cycle, could add 'noise' to our data,” reiterated InSight Deputy Principal Investigator Sue Smrekar of NASA's Jet Propulsion Laboratory in Pasadena, California.

And to help ensure that HP3 has the most unhindered opportunity to reach its desired depth, the team spent weeks choosing a location that offered a (downward) path of least resistance; in other words, the landing location is relatively rock-free.

"We picked the ideal landing site, with almost no rocks at the surface," said Hudson. “That gives us reason to believe there aren't many large rocks in the subsurface. But we have to wait and see what we'll encounter underground." 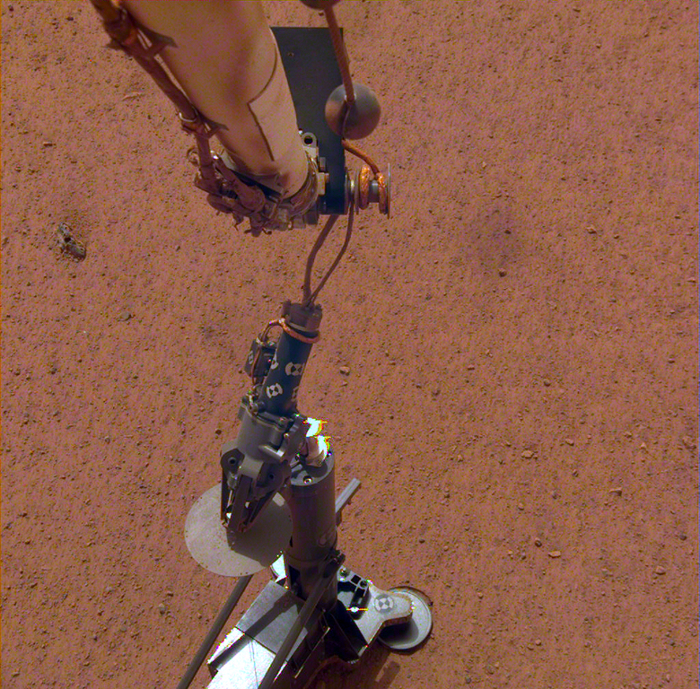