Martian meteorite to be used as target practice

NASA has decided to use fragments of Martian meteorites kept at London’s Natural History Museum for target practice ahead of its ambitious Mars 2020 rover mission. And it will send a fragment back to Mars too as a reference guide.

A piece of a meteorite called Sayh al Uhaymir 008 (SaU008) will also be carried by the rover - now being built at the agency's Jet Propulsion Laboratory in Pasadena, California - to serve as target practice for a high-precision laser on the rover's arm.

Mars 2020's goal is ambitious: to collect samples from the red planet's surface and leave them ready for a future mission to return to Earth.

One of the rover's many tools is called SHERLOC (Scanning Habitable Environments with Raman and Luminescence for Organics and Chemicals), a laser designed to illuminate rock features as fine as a human hair.

London's Natural History Museum will lend the meteorite to NASA for SHERLOC's tests. It will also surrender some of the slab so it can travel with Mars 2020 so that once it arrives SHERLOC has a reference to work with.

Earth has a limited supply of Martian meteorites, which scientists determined were blasted off Mars' surface millions of years ago. These meteorites aren't as unique as the geologically perse samples 2020 will collect. But they're still scientifically interesting -- and perfect for target practice.

"We're studying things on such a fine scale that slight misalignments, caused by changes in temperature or even the rover settling into sand, can require us to correct our aim," said Luther Beegle of JPL.

Beegle, principal investigator for SHERLOC, added: "By studying how the instrument sees a fixed target, we can understand how it will see a piece of the Martian surface."

SHERLOC will be the first instrument on Mars to use Raman and fluorescence spectroscopies, scientific techniques familiar to forensics experts. Whenever an ultraviolet light shines over certain carbon-based chemicals, they give off the same characteristic glow that you see under a black light.

Scientists can use this glow to detect chemicals that form in the presence of life. SHERLOC will photograph the rocks it studies, then map the chemicals it detects across those images. That adds a spatial context to the layers of data Mars 2020 will collect.

Martian meteorites are precious in their rarity. Only about 200 have been confirmed by The Meteoritical Society, which has a database listing these vetted meteorites.

To select the right one for SHERLOC, JPL turned to contacts at NASA's Johnson Space Center in Houston, as well as the Natural History Museum of London. They tried several samples and ultimately agreed on using SaU008, a meteorite found in Oman in 1999. Besides being more rugged than other samples, a piece of it was available courtesy of Caroline Smith, principal curator of meteorites at London’s Natural History Museum.

"Every year, we provide hundreds of meteorite specimens to scientists all over the world for study," Smith said. "This is a first for us: sending one of our samples back home for the benefit of science." 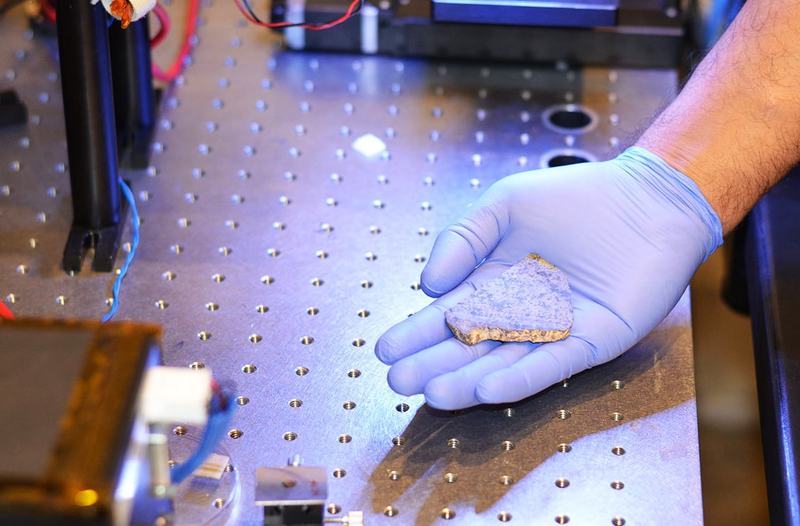 Close-up of a slice of a meteorite scientists determined came from Mars. NASA/JPL-Caltech