New evidence from NASA's Mars Reconnaissance Orbiter suggests that billions of years ago, volcanoes erupted beneath an ice sheet on Mars, far from any ice sheet on the Red Planet today. These findings not only help show how extensive the ice sheets were on the martian planet, but the combination of heat from the volcano and moisture from the melting ice sheets could have provided favourable conditions for microbial life to emerge.

Volcanoes are not unusual on Mars and indeed the Solar Systems largest known volcano, Olympus Mons, dominates the martian western hemisphere. However the appearance of these structures do not resemble typical looking volcanoes and for this reason scientists have used other means in which to identify a series of domed mountains that populate a region of southern Mars called "Sisyphi Montes” – an area that extends from about 55 degrees to 75 degrees south latitude.

A distinctive feature of subglacial volcanoes on Earth is a flattened top. This can occur when a volcano begins erupting beneath a sheet of ice and the interaction of magma with ice and snow rapidly generates a substantial amount of steam that can result in an explosion. The 2010 eruption of ice-covered Eyjafjallajökull in Iceland is a prime example of what can happen to a volcano buried under snow.

About 1,000 miles (about 1,600 kilometers) from Mars’s southern ice cap are sites that have shapes consistent with volcanic eruptions beneath an ice sheet and although they have been observed before, more information was needed to confirm their true origin. "Rocks tell stories. Studying the rocks can show how the volcano formed or how it was changed over time," said Sheridan Ackiss of Purdue University, West Lafayette, Indiana, and one of the collaborators of this research project. "I wanted to learn what story the rocks on these volcanoes were telling." 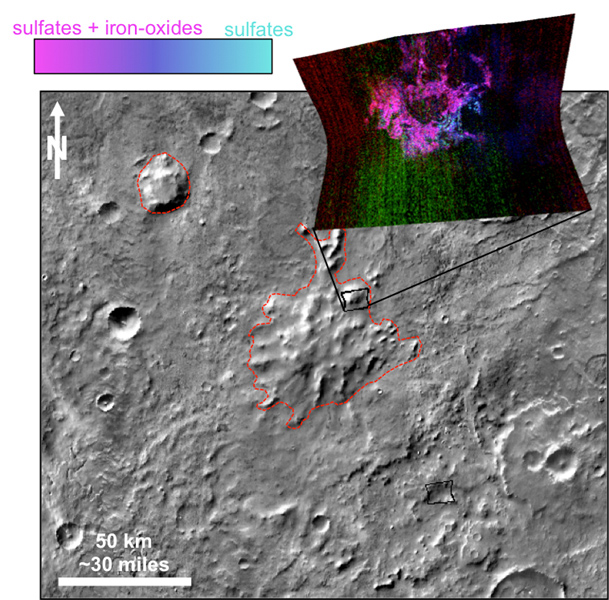 The identified minerals (found in a region known as Sisyphi Montes) indicate where a volcano erupted beneath an ice sheet and are labelled as sulfates (blue) and iron oxides (pink). Image credit: NASA/JPL-Caltech/JHUAPL/ASU

Using the spacecraft's Compact Reconnaissance Imaging Spectrometer for Mars (CRISM), the team were able to identify characteristic minerals including zeolites, sulfates and clays, that on Earth result from subglacial volcanism. By confirming that these structures are subglacial volcanoes it also gave the researchers an indication of just how far the martian ice cap must have spread – the current south polar ice cap has a diameter of about 220 miles (about 350 kilometers).

"We wouldn't have been able to do this without the high resolution of CRISM," said Ackiss. CRISM provides a resolution of about 60 feet (18 meters) per pixel and is one of five other instruments on the spacecraft to investigate Mars since 2006.