A team led by Anna McLeod, PhD student at ESO, has observed incredible new images of pillar-like structures within the Carina Nebula. The pillars in these new images are vast clouds of dust and gas within a hub of star formation about 7500 light-years away.

The MUSE instrument creates thousands of images of the nebula simultaneously, each at a different wavelength of light. Astronomers then use these images to figure out the chemical and physical properties of the materials at different points in the nebula. A total of ten pillars were observed and a clear link was noticed between the radiation emitted by nearby massive stars and the pillars themselves. 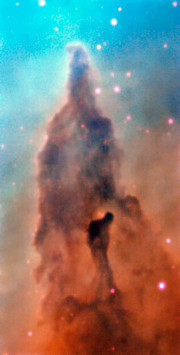 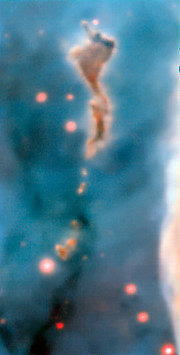 When a massive star is first formed, it destroys the cloud from which it was born. Massive stars are known to have a considerable effect on their surroundings, as they tend to blast out large quantities of ionising radiation. However, observing this effect has been proven difficult. McLeod's team analysed the effect of this energetic radiation on the pillars: a process known as photoevaporation, when gas is ionised and then disperses away. They determined that there was a distinct correlation between the amount of ionising radiation being emitted by nearby stars, and the dissipation of the pillars. Effectively, the stars were destroying the pillars from which they formed.

While this may seem rather dramatic, as the evidence points to the stars destroying the very things that had created them, in reality the relationship between the stars and the pillars is poorly understood. Although the pillars look dense in the images, they are actually very diffuse, and it is possible that the radiation and stellar winds from massive stars actually help create denser spots within the pillars, which can then form stars.