New evidence of a planet-wide groundwater system on Mars

The history of water on Mars is an ambivalent and complex topic, but it would seem that our barren, dusty planetary neighbour is hiding more beneath its arid and desolate surface than we might ever know, as new geological evidence suggests Mars has a planet-wide system of channels that once connected underground lakes with an extensive ocean that covered much of the martian surface.

Our fascination with whether Mars was once more temperate and water-logged is ultimately linked to knowing whether or not life took hold on the Red Planet when conditions were more favourable than they are now. If life did evolve and traces of it could be found, the implications surrounding a discovery of this kind would be huge.

“Early Mars was a watery world, but as the planet’s climate changed this water retreated below the surface to form pools and ‘groundwater’,” says lead author Francesco Salese of Utrecht University, the Netherlands.

“We traced this water in our study, as its scale and role is a matter of debate, and we found the first geological evidence of a planet-wide groundwater system on Mars.”

This evidence comes in the form of channels etched into crater walls that lie deep down – roughly 4000 metres – below martian ‘sea level’ in the northern hemisphere of Mars. The sea-level designation is a bit of a misnomer, as obviously Mars has no visible seas, so it is a somewhat arbitrarily defined level based on elevation and atmospheric pressure.

Other tell-tale features include dark, curved deltas thought to have formed as water levels rose and fell, ridged terraces within crater walls formed by standing water and fan-shaped deposits of sediment associated with flowing water.

Curiously, the team also spotted signs of various clays, carbonates and silicates within five of the deepest craters – minerals, which on Earth are linked to the emergence of life. Moreover, given the depth of the basins they were found in, they could have been in contact with water for long periods of time.

“Findings like this are hugely important; they help us to identify the regions of Mars that are the most promising for finding signs of past life,” says Dmitri Titov, ESA’s Mars Express project scientist.

There is only so much that a space-bourne satellite posted high in the atmosphere can do however, so it will now fall to land-roving probes such as ExoMars – a joint ESA and Roscosmos – to take a closer look. Due for launch next year, this joint venture will target and explore martian sites such as these as it hunts for signs of life on Mars.

“It is especially exciting that a mission that has been so fruitful at the Red Planet, Mars Express, is now instrumental in helping future missions such as ExoMars explore the planet in a different way,” added Titov. “It’s a great example of missions working together with great success.” 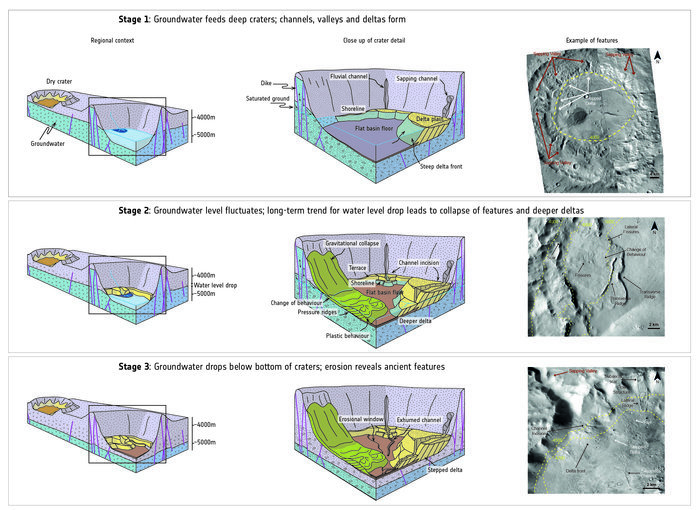 This diagram shows a model of how crater basins on Mars evolved over time and how they once held water. In the first (top), the crater basin is flooded with water and water-related features – deltas, sapping valleys, channels, shorelines, and so on – form within. In the second stage (middle), the planet-wide water level drops and new landforms emerge as a result. In the final stage (bottom), the crater dries out and becomes eroded, and features formed over the previous few billions of years are revealed. Image: NASA/JPL-Caltech/MSSS; Diagram adapted from F. Salese et al. (2019).