A new mission dubbed TOLIMAN that will search for habitable planets around Earth's nearest neighbour has begun development and will be ready by around the middle of the decade, announced scientists at The University of Sydney this week.

Named after the Arabic-derived name for Alpha Centauri from antiquity, TOLIMAN stands for Telescope for Orbit Locus Interferometric Monitoring of our Astronomical Neighbourhood.

It will search for exoplanets around the nearest stars, by looking for the small wobbles a star makes as it responds to the gravitational tug of a smaller companion such an an orbiting planet.

This method is known as the radial-velocity or “wobble” method and was the technique used to find the first planets orbiting Sun-like stars.

It has been hugely successful in helping to discover thousands of exoplanets across vast reaches of the galaxy, yet when it comes to exoplanets in our own celestial backyard, astronomers are still pretty much in the dark.

Five years ago, astronomers made the surprising discovery of an Earth-like planet orbiting our closest stellar neighbour, Proxima Centauri, within the star’s circumsolar habitable zone (HZ).

Dubbed Proxima b, the exoplanet is not only the closest exoplanet to Earth – its host star is located over 4.24 light-years away – it was also considered the most promising place to look for signs of extraterrestrial life. However it’s a thorny issue and the scientific community have remained divided as to whether or not life could exist here.

But, Proxima Centauri is not the only possible star that might be hiding an exoplanet. This red dwarf is one of three stars in the Alpha Centauri system and the other two are very similar to our Sun. Scientists suspect that either or both may host temperate planets.

"It is a modern problem to have; we are like net-savvy urbanites whose social media connections are global, but we don't know anyone living on our own block,” TOLIMAN project leader Professor Peter Tuthill at the University of Sydney, explains.

“Getting to know our planetary neighbours is hugely important. These next-door planets are the ones where we have the best prospects for finding and analysing atmospheres, surface chemistry and possibly even the fingerprints of a biosphere-the tentative signals of life."

With a leap in precision measurement, Tuthill and colleagues are hoping that TOLIMAN will be the telescope to finally determine if any habitable exoplanets reside close to us.

Designed in collaboration with the Breakthrough Initiatives in California, Saber Astronautics in Australia and NASA's Jet Propulsion Laboratory, TOLIMAN will make extremely fine measurements of stars within 10 parsecs of the sun by deploying a new type of optical diffractive pupil lense.

Rather than concentrating the starlight into a tight focused beam as is usually done for optical systems, TOLIMAN has a strongly featured pattern, spreading starlight into a complex flower pattern that, paradoxically, makes it easier to detect perturbances of star movements that are the tell-tale signs of orbiting planets.

"Nobody is underestimating the challenge, but our innovative design incorporates new tricks”, Tuthill says. “Our plan is for an agile, low-cost mission that delivers results by about the middle of the decade."

"TOLIMAN is a mission that Australia should be very proud of-it is an exciting, bleeding-edge space telescope supplied by an exceptional international collaboration,” Dr. Jason Held, CEO of Saber Astronautics, says. “It will be a joy to fly this bird."

The project has also received seed funding from the Breakthrough Initiatives, a science-based programme funded by Julia and Yuri Milner, aimed at searching for signs of life beyond our planet.

“If we consider the nearest few dozen stars, we expect a handful of rocky planets like Earth orbiting at the right distance for liquid surface water to be possible,” Pete Klupar, Chief Engineer of Breakthrough Watch, says: "These nearby planets are where humanity will take our first steps into interstellar space using high-speed, futuristic, robotic probes. 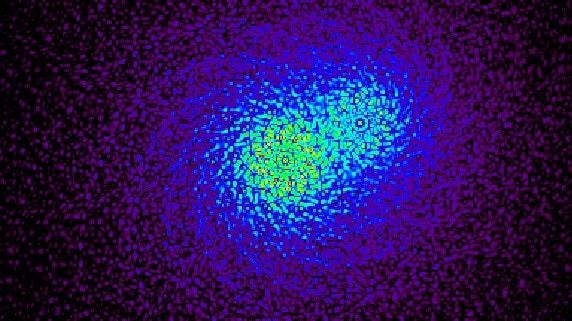 A simulated view of the Alpha Centauri binary through the diffractive pupil proposed for the TOLIMAN telescope. Image: Peter Tuthill