Jupiter's Great Red Spot, a persistent anticyclonic storm, has always been somewhat of an enigma for scientists. Discovered in the 17 th century, it has spawned many theories abouts its composition and purpose. Prior to the Voyager missions, it was thought that the Spot may be solid or liquid, although that has since been disproven. The persistent storm is believed to have lasted for at least almost two hundred years, possibly closer to four hundred. The Great Red Spot has changed its size and color over the centuries and is enormous by Earth standards – the GRS spans three Earth-diameters, with winds that take six days to complete one spin.

In a recent report in “Nature”, scientists working at the Center for Space Physics at Boston University have stated that the Great Red Spot may be the reason behind the high temperatures in the planet's upper atmosphere. Although Jupiter is much further from the Sun than our planet Earth, the average temperatures in its upper atmosphere are comparable to those on Earth, which has been baffling to researchers. It has long been apparent that Jupiter must have a non-solar energy source, but the nature of that source has eluded scientists up until now.

According to Dr. James O'Donoghue, lead author of the study and BU researcher, "With solar heating from above ruled out, we designed observations to map the heat distribution over the entire planet in search for any temperature anomalies that might yield clues as to where the energy is coming from,"

The reported observations (funded by NASA), were analyzed by O'Donoghue and Dr. Luke Moore in collaboration with colleagues Thomas Stallard and Henrik Melin from the University of Leicester in the UK. Data taken spanned nine hours on the night of December 4, 2012, at the In-frared Telescope Facility (IRTF) on Mauna Kea, Hawaii.

A planet's temperature is measured by observing the emissions of infra-red light it produces. The infra-red light emissions used by the Boston University study came from altitudes of 500 miles or so. Upon examination, the researchers found that temperatures at high altitudes on Jupiter were much higher than expected – whenever they looked at the southern hemisphere. 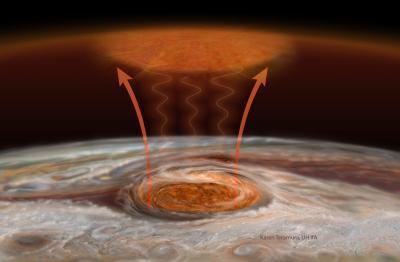 Turbulent atmospheric flows above the storm produce both gravity waves and acoustic waves. Heating in the upper atmosphere 500 miles above the storm is thought to be caused by a combination of these two wave types 'crashing' like ocean waves on a beach. Credit: Art by Karen Teramura, UH IfA with James O'Donoghue and Luke Moore

"We could see almost immediately that our maximum temperatures at high altitudes were above the Great Red Spot far below--a weird coincidence or a major clue?" O'Donoghue added. According to Dr. Luke Moore, a study co-author and researcher at the Center for Space Physics, “The Great Red Spot is a terrific source of energy to heat the upper atmosphere at Jupiter, but we had no prior evidence of its actual effects upon observed temperatures at high altitudes.”

Researchers now believe that these types of high temperatures at high altitudes are not unique to Jupiter or even to our solar system – and are likely to be seen on other giant exoplanets as well.

"Energy transfer to the upper atmosphere from below has been simulated for planetary atmospheres, but not yet backed up by observations," O'Donoghue said. "The extremely high temperatures observed above the storm appear to be the 'smoking gun' of this energy transfer, indicating that planet-wide heating is a plausible explanation for the 'energy crisis.' "