Wishing upon a star will be a bit easier on the night on August 11 th, as the Earth passes through the trail of the Comet Swift-Tuttle. The Perseids meteor shower will rain down at double the usual rate, in a first outburst of this magnitude since 2009. According to NASA meteor expert Bill Cooke, "This year, instead of seeing about 80 Perseids per hour, the rate could top 150 and even approach 200 meteors per hour."

Our planet Earth has been passing through the trail of the Swift-Tuttle Comet since July 17, and we're quickly approaching the densest area on the night of August 11 th. The comet is the largest object to repeatedly pass by Earth (every 133 years), with a nucleus of about 26 kilometers. The last time it passed by the Earth was in 1992, and the next time will be in 2126. However, as the Earth passes through the debris and dust left by the comet, the Perseid meteor shower can be observed once a year. What observers see here on Earth are pieces of debris that burn up as they enter our atmosphere. 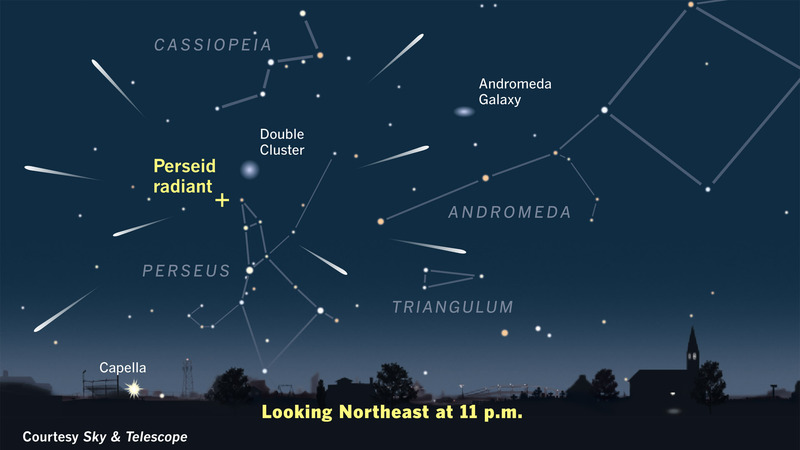 This sky map shows the radiant of the Perseid meteor shower from the constellation Perseus in the northeastern sky during the meteor display's peak on Aug. 12 and 13, 2015. The Perseids appear to radiate out from a point on the border of constellations Perseus and Cassiopeia. Credit:Sky & Telescope Magazine Illustration

Perseids come from the Perseus constellation, which typically appears on the horizon around 10 p.m. Tonight, most meteors will appear after midnight. The best time to see the meteors is after the moonset, expected around 1 a.m. your local time on August 12 The Perseids will be most spectacular in the Northern Hemisphere.

The best place to watch the meteor shower is in the countryside or anywhere with a wide open sky. Meteor-watchers should be patient – the longer you let your eyes adjust to the darkness, the more meteors you'll see. At its peak of 150-200 meteors per hour, observers will be able to see two or three meteors a minute. The brightness of each meteor will vary depending on its size, but tonight promises to be a spectacular fireworks show.

Meteor watchers will also get to experience a bit of time-travel as they observe tonight's shower. According to Cooke, “The meteors you’ll see this year are from comet flybys that occurred hundreds if not thousands of years ago. And they’ve traveled billions of miles before their kamikaze run into Earth’s atmosphere.”

So grab a seat under the open sky and don't forget to bring your wishes - tonight, the shooting stars will be hard to miss!