NASA’s Perseverance rover’s first attempt to collect a rock sample on Mars and hermetically seal it in a sample tube has not gone as planned say the agency in a statement.

Although Percy has been able to drill a hole in the martian surface – the first ever dug into the Red Planet by a robot – data analysed by a team as it trickled back to Earth during the middle of the night suggests that no rock was collected during the initial sampling activity.

“Early pics and data show a successful drill hole, but no sample in the tube–something we’ve never seen in testing on Earth,” the Mars rover Twitter account said.

To extract samples, a process which is autonomous from beginning to end, Perseverance uses a hollow coring bit and a percussive drill at the end of its 2-metre-long (7-foot-long) robotic arm that enables the rover to hold and use science tools like a human geologist would.

NASA said telemetry sent by the rover indicated that during its first coring attempt, the drill and bit were engaged as planned.

Even during post-coring, the sample tube was processed as intended. Percy is carrying 43 titanium tubes and the Sampling & Caching team hope that eventually about 35 rock samples will be brought back to Earth by future missions.

However for some reason, the tube is showing as empty after use.

With pictures clearly showing a hole in the ground where Percy drilled, where did the martian soil that was extracted go?

“The initial thinking is that the empty tube is more likely a result of the rock target not reacting the way we expected during coring, and less likely a hardware issue with the Sampling and Caching System,” said Jennifer Trosper, project manager for Perseverance at JPL. “Over the next few days, the team will be spending more time analyzing the data we have, and also acquiring some additional diagnostic data to support understanding the root cause for the empty tube.”

Returning samples from Mars has been a goal of planetary exploration since missions to the Red Planet were first envisioned. Although Curiosity has been drilling holes on the martian surface for years, it has never tried to collect a sample before. NASA’s “mole”, the heat probe instrument on the agency’s InSight lander has also been unable to dig down below the surface as planned.

“I have been on every Mars rover mission since the beginning, and this planet is always teaching us what we don’t know about it,” said Trosper. “One thing I’ve found is, it’s not unusual to have complications during complex, first-time activities.”

Meanwhile, Ingenuity, Percy’s companion in the skies, has recently captured stunning new aerial views in 3D of low-lying wrinkles in the surface of Jezero Crater - the mission’s landing site.

Dubbed the “Raised Ridges”, the science team studying the stereo images say they consist of three distinct surface fractures that converge at a central point. On Earth, similar fractures in desert environments might be a clue to past liquid water activity and thus past habitability.

The shoe-boxed size helicopter has since completed its 11th flight last week and has travelled about 380 metres (1,250 feet) downrange of its current location.

It is scouting the southern Séítah area in the crater to provide aerial reconnaissance before Percy arrives to take a closer look.

Séítah”, meaning “amidst the sand” in the Navajo language, is one of two geologic units containing Jezero Crater’s deepest and most ancient layers of exposed bedrock and other intriguing geologic features.

Next, Perseverance will travel north, then west, toward the location of its second science campaign: Jezero Crater’s delta region.

The delta is the fan-shaped remains of what scientists believe is the joining of an ancient river and a lake within the 45.0 km (28.0 mi) wide crater.

Conceivably, microbial life could have lived in Jezero if the area was flooded in Mars’ past and if the region is rich in carbonate minerals, as scientists suspect it is, fossilised remains of this ancient life might be found in lakebed or shoreline sediments.

Scientists will study how the region formed and evolved and seek signs of past life via the samples collected by Perseverance. 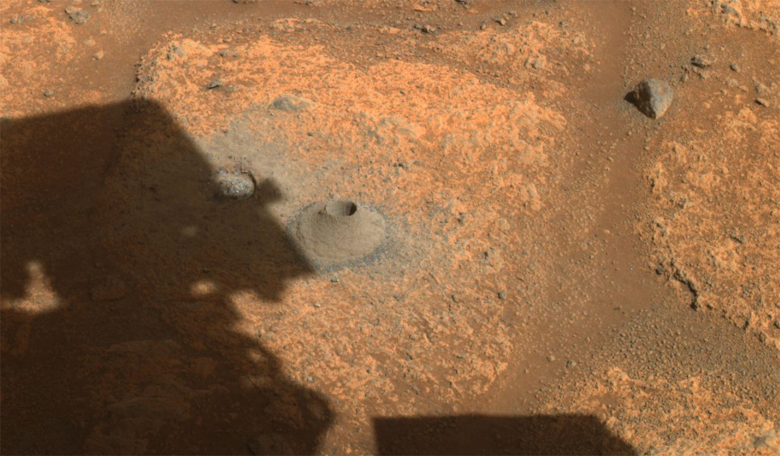 This image taken by NASA's Perseverance rover on August 6, 2021, shows the hole drilled in a Martian rock in preparation for the rover's first attempt to collect a sample. It was taken by one of the rover's hazard cameras in what the rover's science team has nicknamed a "paver rock" in the "Crater Floor Fractured Rough" area of Jezero Crater. Image: NASA/JPL-Caltech