Could the theory of cosmic inflation soon be replaced with the idea that our Universe is a vast and complex hologram? Perhaps so, as recent studies by an international team of researchers investigating irregularities in the afterglow of the big bang have provided what could be the first observational evidence to support a holographic explanation of the Universe.

The cosmic microwave background (CMB) is often described as the leftover radiation of the Big Bang and studies of this phenomena offer a unique window into the very early Universe and Planck scale physics, I.e. Physics on the tiniest of scales (a Planck length is 1.61×10−35 metres!). How the CMB got to be everywhere all at once is to do with the theory behind it - the theory of inflation. Developed in the 1980s to explain several puzzles with the standard Big Bang theory, the Inflation theory proposes that a period of extremely rapid and exponential expansion of the Universe occurred during its first few moments and the CMB is a major tell-tale signature of this event.

The theory of inflation is also linked to quantum gravity. Quantum gravity is a field of theoretical physics that seeks to describe gravity with the principles of quantum mechanics. Our Universe has been effectively described by two dominant sets of physics; those governing the very, very small – quantum mechanics – and those controlling the very, very large – Einsteins theory of general relativity. However trying to fit the two together is like trying to fit a square peg into a round hole, it just doesn’t work (not without a whole lot of mess that no-one can successfully clean up).

Scientists therefore look to quantum gravity to unify these two grand theories, which in turn could provide an insight into how the Universe began.

One of the deepest insights about quantum gravity that has emerged in recent times is that it is expected to be holographic. A holographic universe is one where all the information, which makes up our 3D ‘reality’ (plus time) is contained in a 2D surface on its boundaries. The idea is similar to that of ordinary holograms (ones that you find on your credit card for example) where a three-dimensional image is encoded in a two-dimensional surface.

It is perhaps easier to visualise it in the context of a watching a 3D film at the cinema. You can see the images as having height, width and more importantly, depth – when in fact it all originates from a flat 2D screen. The difference, in a 3D universe, is that we can touch objects and the ‘projection’ is ‘real’ from our perspective.

“Imagine that everything you see, feel and hear in three dimensions (and your perception of time) in fact emanates from a flat two-dimensional field. The idea is similar to that of ordinary holograms…However, this time, the entire universe is encoded!” said Professor Kostas Skenderis from the University of Southampton, UK and one of the members of the research team who have recently submitted their findings in the journal Physical Review Letters. 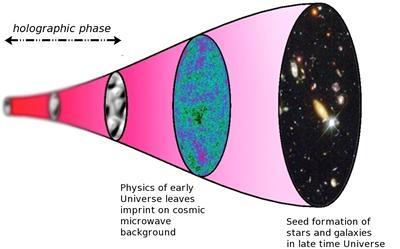 Sketch of timeline of the holographic universe. Credit Paul McFadden.

Skenderis and team were able to make complex comparisons between networks of features in data hidden in the ‘white noise’ or microwaves left over from the moment the universe was created, coupled with quantum field theory. Using this information the team found that some of the simplest quantum field theories could explain nearly all cosmological observations of the early universe – in fact, as much as there is for the traditional explanation of these irregularities using the theory of cosmic inflation.

“Holography is a huge leap forward in the way we think about the structure and creation of the universe. Einstein’s theory of general relativity explains almost everything large scale in the universe very well, but starts to unravel when examining its origins and mechanisms at quantum level. Scientists have been working for decades to combine Einstein’s theory of gravity and quantum theory. Some believe the concept of a holographic universe has the potential to reconcile the two. I hope our research takes us another step towards this,” said Skenderis.