A new study on salt-bearing sediments analysed by NASA’s rover Curiosity suggests that Gale crater on Mars was once home to salty lakes that began to disappear when the red planet started to dry up around 3.5 billion years ago - findings that back up previous results collected from satellite observations.

Since touching down in Gale crater – a huge depression spanning 154 kilometres (96 mi) in diameter with a mountain, Aeolis Mons, at its centre, NASA's Curiosity rover has come a long way in seven years, not just in terms of the distance its travelled.

The hardy rover has racked up a total of 21 kilometres (13 miles) and climbed 368 metres (1,207 feet) 368 meters after leaving its "start" point in Yellowknife Bay on 4 July, 2013 and along the way has found many signs that point to the persistent of liquid water in Mars’ past; such as smooth, rounded pebbles that likely rolled downstream for at least a few kilometres in a river that was ankle- to hip-deep and sheer rock faces over 300 metres (1000 feet) high at Mount Sharp which scientists believe are leftover mudbanks that would have once been part of a series of shallow lakes.

Any water that was once present on its surface is now clearly long-gone and understanding more about the change in Mars’ climate from a watery world to that of a giant desert is one of the primary objectives of the Mars Science Laboratory (MSL)/Curiosity rover investigation.

One thing that many planetary geologists agree on is that this transition is believed to have taken place in Mars’ Hesperian period, an era dating to around 3.1 – 3.7 billion years ago. It is the rover’s investigations at the Murray Formation, a distinctive mudstone geologic formation that is more than 300 metres (980 ft) thick, which has helped scientists uncover this latest piece of the puzzle.

Using Curiosity’s ChemCam instrument, a tool that vaporises rock surfaces to identify the chemical and mineral composition of rocks and soils, a US-based team of scientists headed by William Rapin at the California Institute of Technology, Pasadena, analysed samples from a rock formation with different layers of sediment. This distinct stratigraphy is a useful record that shows what type of sediment was available at that period in Mars’ history.

Within these sedimentary rocks, Rapin and colleagues found an enrichment of calcium sulphate and magnesium sulphate which so far have not been found in the same form and abundance in older rocks previously analysed by Curiosity. The deposits, say the team who presented these latest findings in Nature Geoscience this week, are the salty leftovers from when water in the crater’s lakes evaporated leaving behind a pool of highly concentrated brines.

As such, the presence of distinctively saline waters supports the hypothesis of Mars drying out during the Hesperian period, leading to a more arid and sulphate-dominated environment adds Rapin and colleagues.

Curiosity is far from done in its quest to unravel Mars’s climatic history and it has a few more years left before its nuclear power system degrades enough to significantly limit operations. In the mean time, the rover will continue to explore other younger rocks in Gale crater, to hopefully reveal additional insights on the drying out of Mars’s surface. 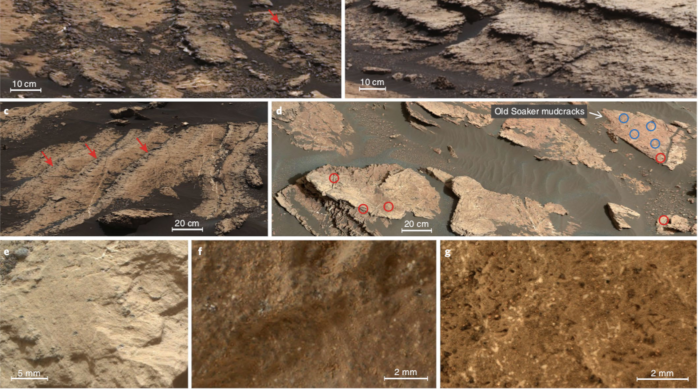 A close up of the bedrock analysed by William Rapin and colleagues. Circles represent the locations of ChemCam targets with calcium sulfate enrichments (red) and without (blue). Image Rapin et al, 2019.