With a stunning image of the galactic centre to mark its inauguration, South Africa’s Deputy President Mr David Mabuza unveiled MeerKAT, a set of 64 telescopes that has already joined the ranks of the world’s great scientific instruments and will one day be incorporated into something even larger.

Built and operated by the South African Radio Astronomy Observatory (SARAO) in the semi-arid Karoo region of the Northern Cape, the MeerKAT facility is a precursor to the Square Kilometre Array (SKA) telescope, a joint project to build the world’s largest telescope in remote parts of both Africa and Australia.

MeerKAT has already begun science operations and one of its first public images (above) is of a spectacular panorama of the region surrounding the supermassive black hole at the centre of our Milky Way Galaxy. The image reveals extraordinary details with a wealth of never before seen features, including a clearer view of previously known star-forming regions, supernova remnants and radio filaments.

The centre of the Milky Way is approximately 25,000 light-years away and it is hidden away behind intervening clouds of gas and dust, making it invisible from Earth using ordinary telescopes. However, some light does get through - light at very high frequencies (X-Rays) and light at the other end of the electromagnetic spectrum (low frequencies I.e.radio waves) can escape beyond the thickly shrouded centre and this is where MeerKAT comes in.

With its 64 dishes or antennas (each 13.5 meters in diameter) MeerKAT provides 2,000 unique antenna pairs to look at the sky between frequencies of 900 MHz and 1670 MHz; far more than any comparable telescope. In doing so, the array can produce high-fidelity images of the radio sky, including what could arguably be the best view yet of the centre of the Milky Way.

“We wanted to show the science capabilities of this new instrument”, says Fernando Camilo, chief scientist of SARAO. “The centre of the galaxy was an obvious target: unique, visually striking and full of unexplained phenomena – but also notoriously hard to image using radio telescopes. Although it’s early days with MeerKAT, and a lot remains to be optimised, we decided to go for it – and were stunned by the results.”.

Although MeerKAT is a world-class facility in its own right, the array will ultimately become part of a vast array of dishes that when complete will make up the formidable SKA. This large multi-national project, when finished will have a total collecting area of approximately one square kilometre (or 1 million square metres).

For comparison, the Atacama Large Millimeter/submillimeter Array (ALMA) in Chile, which is already revolutionising areas of astronomy, has around 66 operational antennas and a total collecting area of 6600 square metres (71,000 square foot).

Now that MeerKAT is complete, the next stage will be to add a further 133 dishes in Karoo and then in 2030 when the second phase of the SKA kicks in, the network of dishes will be extended into eight African partner countries, meaning that some of the dishes will be located over thousands of kilometres across Africa. On top of that will be all of the dishes in Australia.

All is all the SKA will use thousands of dishes spanning a range of radio frequencies and up to a million low-frequency (aperture array) antennas, to monitor the sky in unprecedented detail and to survey the entire sky much faster than any system currently in existence.

“MeerKAT stands at the end of a chapter, and at the start of another one,” said SKA Director-General Prof. Phil Diamond in an address at the ceremony. “South Africa and the South African people should be proud: this is a fantastic milestone for the country, that will certainly make history. Now the science can start in earnest, and you can reap the scientific benefits of all your hard work.” 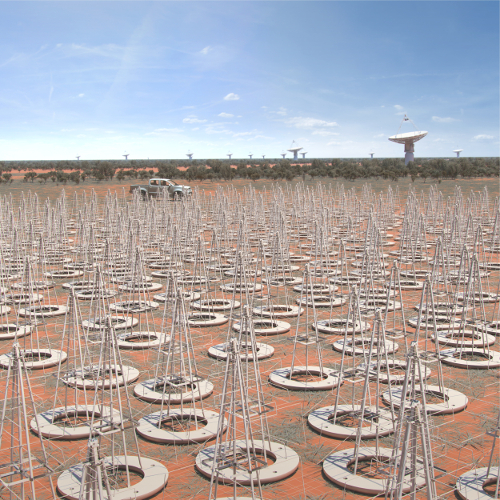 Artist Impression of dipole antenna. A type of aperture array antenna that SKA will use. Image: Swinburne Astronomy Productions/ICRAR/U. Cambridge/ASTRON.